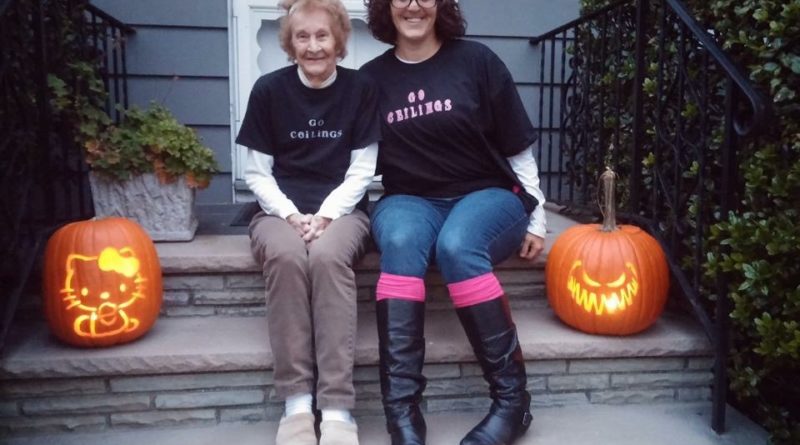 For all the time I spent without my family growing up, I was HashtagBlessed to meet my Grandma’s two younger sisters and three of my mom’s 7 cousins in October 2014.

Great Aunt Marjorie and her daughter, my second cousin Susan, and I hit it off immediately. That’s not to say I don’t like Aunt Marilyn or her daughters too, but there was an immediate kinship with Aunt M and Susan. Immediate.

I still lived in the Bronx at the time and before I knew it I was driving out of the City and across the GW bridge as often as I could to visit.  Aunt M lives in the house she helped build in Union 64 years ago and Susan lives about 45 minutes away on a farm she bought with her late husband 20 years ago.

Susan’s place is a 216 year old stone farm house on a creek with acres of walnut trees, wild berries and more animals than I’d ever seen in one place. And chores. Oh man did she have farm chores galore and need help that season.  My inner farm child was set free that Fall.  And? They’re FAMILY.

Fast forward. I moved down to NC a year after meeting them and the best way to describe Aunt M’s reaction was gnashing of the teeth. She was sore. And not afraid to voice it.

“Ready to leave the City? Move in here. I’ll never see you again if you leave, Jenn. We’re just getting cawt  up.”

I assured her I’d be back, and I have been, at least once a month since moving in Sept. Sometimes I stay for 2 days (early Christmas) sometimes it’s a full blown 96 (4 days; surprise 90th birthday party) and last time I stayed (at the farm) for 32 days. Because lambing season. And lambs. Oh the lambs.

We talk several days a week, she calls for a garden report, asks for a SitRep on my pick-up, checks in. We talk a lot about my childhood. By talk I mean she peppers me with questions because she had literally no idea what our lives were beyond an occasional school (or boot camp) photo. And she’s pissed. That’s a whole separate post.

It was a no brainer then, when Susan called to tell me Aunt M was in the hospital with breathing issues Friday morning, that I’d drive north.

Except Aunt M said no when I called her room.

“Get outta here wit dat, Jenn. Come on. I’ll be outta heah on Sunday. I’ll be home before you get heah.”

She has an accent that, to my WestCoast/Southern hybrid ear, sounds like a cross between the Jerkey Boys’ Sol Rosenberg and Cyndi Lauper.

And she’s fierce. And speaks her mind. I love her.

Susan said she’d expressed her concern about me driving up for a false alarm and, “it will only make her angry if she thinks you came against her wishes” and so, I stayed in NC and got daily updates.

Monday evening Susan told me she’d had a devastating night that included blood pressure bottoming out, inability to place an IV, spontaneous bleeding (for hours) and she’s pretty wiped out.

So I called and told Aunt M I was coming north in the morning. She sounded relieved and, in truth? She was too weak to argue.

Wrapped up some deliverables this morning, packed my truck and drove.

Called every two hours to check in (as I do every time I drive up. She’s usually at the table following me on a Rand McNally map) and her Vickie was weaker and weaker with each call.

“So stop calling and let her rest, jerk.” If that crossed your mind, thanks. I didn’t think of that. Except I learned when I was in Germany that if I don’t call, she assumes the worst and her mind goes crazy wondering how many ways I’ve been maimed or otherwise injured enroute.

I arrived two hours past visiting hours and walked in past the security guard like I belonged there. A challenge, since I really needed to ask directions to her room.

When I walked in her room the first thing out of her mouth was “Oh Jenn, you’re heah. How many days can you stay?” And she cried. Which makes me sad. And makes me feel so indescribably loved.

For the next hour she gave me instructions on finding the hide-a-key, discussed what needed to be done in her garden this week, explained how to open the windows in the guest room (as she does every time I stay) and let me know when Jose (gardener) was returning from Puerto Rico, told me I needed to go pull weeds at the farm.

All while I spoon fed her chocolate ice cream pilfered from the nurse’s kitchen and Rachel Maddow talked to some California politician supporting Hilary Clinton. She never misses Maddow.

Longest 10 hour day I’ve had in a while, driving up thinking she’s knocking on heaven’s door.

I mean, I realize she’s 90 and no one lives forever but really? I just found her and I’m not ready to say goodbye yet.

*Bound to be typos; I banged this out with my thumbs on my phone and I’m too tired to copy edit with a slow connection sans Wifi. ¡Salud!*

One thought on “Aunt Marjorie is a Joisy Goil”