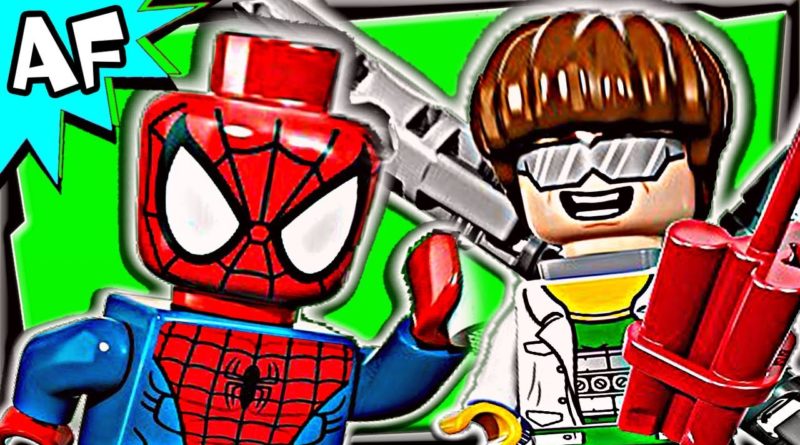 I recently had the chance to build some with (ok, for, really, since he is only four and the set was for 6-12 year olds) my nephew Gunnar. Let me explain.  I went to Fredericksburg a few weeks ago for, among other things, Gunnar’s fourth birthday.  Sometime between the train station, COSTCO and home they were shocked to discover I’d never seen the Lego Movie.  And so  we watched it that night.  You’ve all seen it, I’m sure.  The perfect mixture of characters, genres, humor and sarcasm…  and every conceivable (and inconceivable) Lego. Ever. It was like a Lego version of youth refuting dystopia.

Everything is Awesome.   We even danced to the song at the end. “Keep dancing, Aunt Jennie. Keep dancing…”

Saturday morning Gunnar enlisted me to help finish building a Spiderman set he’d just received for his birthday.  That is to say, while he went with his Mama and big brother to run pre-birthday party errands like picking up cupcakes, I drank coffee and tackled Legos. I may or may not have grumbled at the babysitter, Miss Mary Anne (whom the boys adore), for buying him a set well outside of his age range.  Did she expect HIM to build this? Of course, I’d already forgotten the set I bought the boys for Christmas 2012… and the time I spent building it for a barely two and almost four-year-old.  Heh.

Because he was so enthralled with the Legos and couldn’t stop talking about Spiderman, I took him to Target to pick out a set on Tuesday, his actual birthday.  I knew he wanted Spidergirl (“Aunt Jennie, she’s Spiderman’s sister!”) and I knew I’d be assembling whatever he picked out.  Easy day.  Once we got to Target I discovered there’s a Lego aisle.  And Legos, it seems, are shelved like wine.  We searched each of the boxes and I finally found Spidergirl.  In a set on the top shelf.  I was stoked as I pulled it down and handed it to him.  I rarely have the chance to say “pick whatever you want, buddy” because Meg makes me toe the line and not be an overindulging Aunt/Godmother. When I handed it to him he said, “S’cuse me Aunt Jennie? That one is too s’pensive.” (I can only believe he’d heard Miss Mary Anne say that once or twice on an outing to Target or Barnes and Noble.)

What?  No, buddy.  Today I get to buy you whatever (I) you want (though I’d been forbidden to purchase the Batcave) and this one has Spidergirl.  Let’s get it!

And so we went home to build.  Together.  At the house I realized the set had (gulp) 299 pieces.

Easy day, right? I mean, there are two of us. We got this. He suggested we build the Green Goblin and his hovercraft first. Start small. I like that.  Good plan!

“S’cuse me Aunt Jennie? Will you build the rest of it while I play with this?”  I laughed right out loud.  Genius, this kid is.

Now, if you’re a parent and already experienced this, forgive me.  I loved every second of it.  And of course, snapped photos.

He came back around once the helicopter started to look like, well, a helicopter.  In between helping me and flying the Green Goblin he was randomly sticking pieces together, assembling who knows what his little mind envisioned.  (remember that for later)  A few times I caught myself saying “That doesn’t go there. That isn’t…” I decided to let him play with the parts I wasn’t using rather than sound like a Lego hall monitor or, worse, Lord Business.  Somewhere amidst policing myself and building, I missed a step.  I actually asked him to stop singing and stop asking questions for two minutes while I backtracked seven steps to find a rogue piece… He happily complied and Green Goblin flew into the playroom and back. Quickly. Scooby Scooby Do, where are you? …

Between the time it was finished and the time I put lunch on the table I’d repaired the rotary blades twice and showed him several times how to stash Spiderman without taking the doors off…  (remember this for later)  I also bit my tongue when I saw he’d altered the facade and now, despite the fact he was thoroughly enjoying his new toy? It didn’t look EXACTLY like the picture on the box.

As I now understand to be perfectly normal, the helicopter needed to be reassembled a few times in the next 48 hours.  Meg joked with me about having to refer to the instructions to fix the rotary blades.  those.darn.blades. When that task fell to me I coerced, um, I mean, convinced him to let me glue them together.  Simple blades and they contained 28 ridiculous pieces.  The glue was ONLY used on the blades.  I broke out the Kragle; don’t judge me.   “But Aunt Jennie…”

Big Brother Declan made an appearance in the Lego Madness (his current fixation is NFL and MLB teams, scores and names) and I remembered I had “Lego Jennie” upstairs in my camera bag.  I retrieved her for them and laughed when I heard them saying “Jennie, you’re going to jail. Jennie, I’ll rescue you.  Jennie…”

Buddy? (perfectly calm) How’d it break? It was super glu…  “I tried to take it away from her.”  Why?  “She’s going to jail and she can’t have her camera there.” Why is she going to jail? “She’s a villain.” Oh. Why is she a villain? “Because she’s taking too many pictures.”  Oh.
“Why is her hair stuck on? Did you glue her hair on?” (because Aunt Jennie is bad and uses Kragle…) Wait. Were you going to take her HAIR away before eyou sent her to jail, too?  I digress…

Meg sent me this photo after I was back in NYC and said, “He found the train table you bought a few years ago; it doubles as a Lego table and I brought it up from the basement. He’s now dismantled each of his vehicles and is building a city.”

And that, friends, is why I set out on Sunday to find some used Legos.  I’ll spend less than I would at Target and they’ll have supplemental pieces to build with.

I’m not sure what I expected to pay for used Legos.  My idea was buy them, sanitize them, send them.

On my way to the first of six Goodwill stores I mapped out in Connecticut I passed a church rummage sale.  I stopped. I had to!  I was looking at Spiderman comics in the first stall I came to (decided they were too mature for the boys) and the guy selling them said, “you can have the whole stack for $1.” I actually bought them because I didn’t have the heart to say “No thanks; they’re too mature for my four and five year old nephews.”  I did say, “Thanks! I’m actually looking for Legos.”

It’s not an exaggeration to say this guy’s face lit up. He looked at his wife, she smiled and said, “Go ahead.”  He said, “I have a whole bag of Legos at home! Wait right here, I’ll be back!”  I demurred initially, concerned about inconveniencing him. Also? I didn’t know what “a whole bag of Legos” meant and I didn’t want to feel like a jerk if he went home and then I didn’t want to pay some exorbitant price. The whole point of used was to try to build up their collection without breaking the bank, right?   “Wait here! Keep shopping! I’ll be back!” And off he went.

While I rummaged, I contemplated what I’d pay.  How much was too much.  As I meandered I decided “$30 is as high as I’ll go for a whole bag of used Legos.”  I rounded the corner and he was walking towards me with not just a bag but two boxes.

I made my way back to their rummage space and he and his wife were talking.  They were dumping small bags into the big bag, making space for the boxes and I finally said, “So, how much is that going to set me back?”

I’m not cheap but neither are Legos as I’d recently learned at Target. I was trying to do this on a budget; more bang for the buck, yanno?

Excited, holding a J Crew bag full of Legos, the guy said, “How about a five-r?”  Hmmm.  Before I could contemplate talking him down from $50 to $30 his wife said, “Honey, give them to her for two.”

Wait. “Five DOLLARS? You only want FIVE dollars for that WHOLE collection of Legos?”

I pulled two five dollar bills out of my pocket and tried earnestly to make him take both.  He refused, while she laughed and tried to make him give me three dollars back.  It was awkward and I was giddy.  I walked back to the truck unable to believe it and posted this photo Facebook along with an apology to Meg and Rory for any Legos they step on for the next decade.

I finished shopping and exploring Connecticut and hauled my loot upstairs late last night. (My day included, unexpectedly, a giant panda and Starbucks but that’s another story.)

I decided I was going to build the X-wing fighter.  I figured I could bubble wrap it and ship it to the boys.  Laugh with me, friends.  Meg often says I have these romanticized notions of how things will work re: the boys.  Despite everything I just typed about building and rebuilding and fixing and fixing and finally gluing only the rotary blades on that helicopter two weeks ago, I actually planned to build a (used) X-wing fighter with moving parts, bubble wrap it and mail it to a four and five year old?

Luckily for me, the first piece was missing.  Literally, the FIRST piece in the 70 page instruction manual?  Was nowhere. Not in either box, not in the J Crew bag…  nowhere.

I was oddly sad and briefly felt like the whole day was wasted. My roomate said, calmly (and to his great credit, without a mocking tone), “Throw away the photos and the instructions and just send them the Legos, Jenn.  That way they never know what they CAN’T build.  All they’ll see is what they want to build.”

OK.  That’s reasonable.  This is where I remind you, as the title suggests, I didn’t have Legos as a kid and, really, my exposure to them has been limited to following instructions and making the blocks look like the picture.

I decided instead to sort, clean and pack them up for the boys. And so I did.  For hours. I might be over my Lego excitement now.

She sent a text back and I could hear her laughing, “Dude. You organized them? You know he’s just gonna dump ’em all out. You know they both want them. You KNOW Gunnar will be thrilled. ;)”

I responded, admitted standing on the emotional ledge last night re: the X-wing fighter and she said, “They’re Legos. They shouldn’t bring you stress. They bring excitement. They’re going to love them. Thank you for thinking of them.”

At the very least, I’m certain they both have the imagination to be Master Builders. (Goodness knows Aunt Jennie doesn’t…)  I suspect, given his proclivity for imagining, creating and recreating scenes already, Gunnar might even be The Special!

And just like that, $5  and five hours made up for the time I didn’t spend playing with Legos as a kid.

One thought on “I wasn’t a Lego kid”