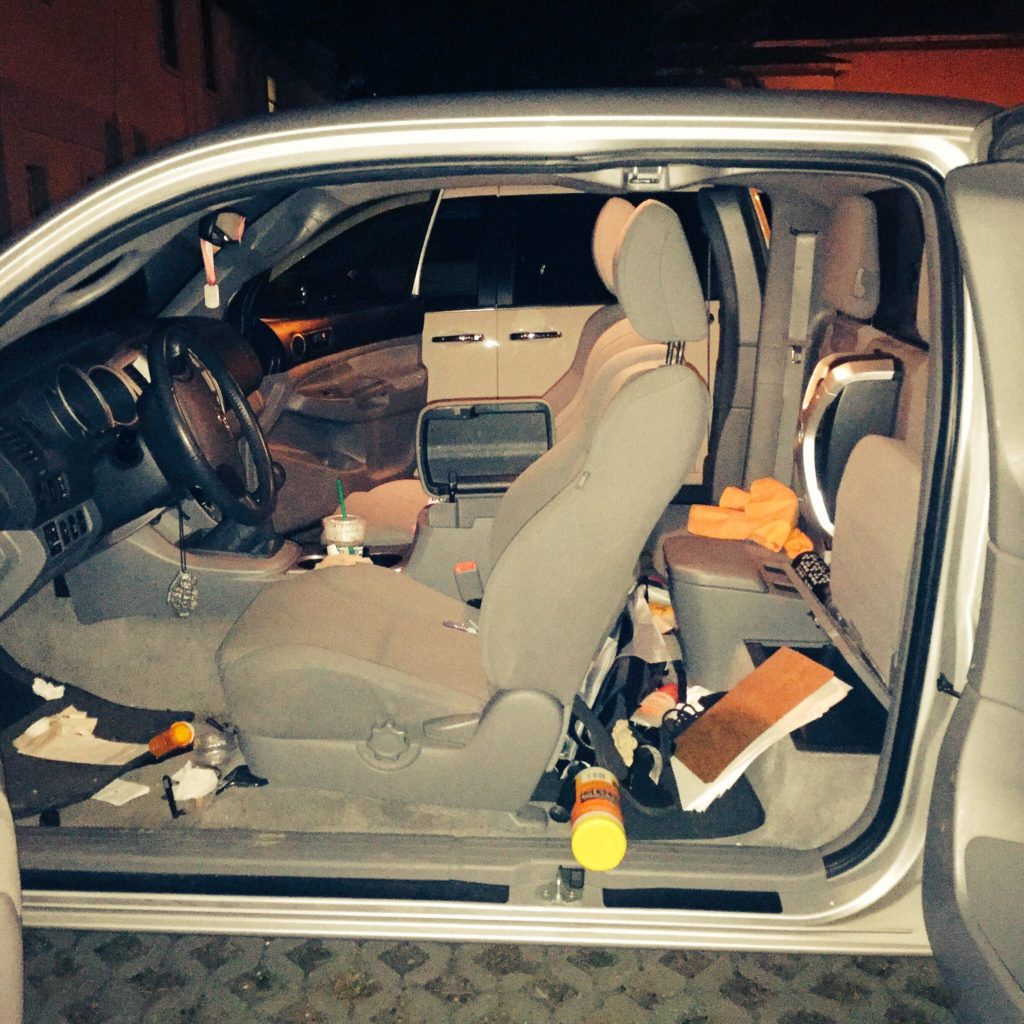 TL;DR? Money doesn’t belong in a soup can in the center console.
I’ve been volunteering in Myrtle Beach, SC for a week doing disaster recovery clean up with Team Rubicon. I LOVE THIS GROUP!  Love helping. Love falling into bed at night exhausted. I got to do public affairs (public information officer) on this operation, so it was like old home week, too.
I don’t love Myrtle Beach, though.
I mean. I don’t love the jerk who ransacked my truck.
I parked in the gravel lot across the street on Thursday where the rest of the guys parked and haven’t been back to my truck until tonight when I went to re park it in the lot right next to the motel we’re staying in. The AWESOME motel where the sweet, sweet owners let us stay for FREE …
Unlocked the driver’s door and almost immediately realized something was wrong.
Of all the vehicles to break into, the dude picked the pick-up that belongs to the woman who had a HUGE garage sale last week and locked $1980 cash in the center console intending to find a Navy Federal branch once she crossed into South Carolina and totally forgot about it.  Yeah.  I had two grand in a soup can locked in my truck.
As soon as I realized I’d been robbed, I looked at the rearview mirror to see if Ryan’s dog tag was still hanging there.  It was. I started to cry.  And remembered the money. And vomited.  And walked inside to tell the handful of Team Rubicon guys still on scene.
Back to the jerk.  He wasn’t just greedy and lucky, he was dumb.
Besides the cash I planned to use to move to Virginia in two weeks, he took:
1 Nike golf shoe, women’s size 8.5
1 pair of prescription sunglasses (they were a year old, so not still $300, but still. Who steals PRESCRIPTION GLASSES?  That’s rhetorical. OBVIOUSLY the same jerk who steals ONE golf shoe steals prescription sunglasses. I hope he trips.)
1 vintage tape measurer *damnit, Pop gave that to me and I wanted to keep it.*
1 new jack set.  (sorry, Mullen, I know that wasn’t cheap)
1 socket set. Not expensive, but still. IT WAS MINE.
The quarters that were in the prescription pill bottle that I never spent because Aunt Marjorie gave them to me and I just liked having that bottle full of quarters in my console.  He left the empty bottle on the floor; thank god there was no label on it and I didn’t have to answer questions about THAT.
I cried in spite of myself.  In front of a buncha new friends, no less.  Crying was more productive than smashing my fist into the passenger window (I considered it) or throwing the stainless steel Starbucks water bottle against the side of the truck ( I considered it).
We called the cops and filed a police report.

While we were waiting on the cops to arrive some dude walked up and said “Hey, yo. I got three forties of Budweiser, lemme get $3 bucks for each of ’em.”

We all had a good laugh when I said, “No thanks, we’re drinking canned Yuengling; that’s more our speed.”
Everyone hung out while the police came and went, I got a souvenir police report number from a pair of helpful cops who were shocked but not mouthy about the fact I had cash in my truck and assured me the detectives at the station would pull footage from the camera on the utility pole in the parking lot.

“But cash, though… that’s hard to replace.  Even with a police report.”

My TRibe hung out while I cleaned out my truck after I tearfully declined help –threw everything but my umbrella and the VA file away.  Stoked the guy didn’t take the dog tag, my Team Rubicon patch or my awesome high speed umbrella but I didn’t want to keep ANYTHING else.
I know I mentioned that umbrella twice, but it’s seriously an awesome, wind resistant umbrella and I love it.  Way more valuable than ONE NIKE GOLF SHOE. #idiot I finished crying while I smashed random items into a trash-bag.
And so.  They’re watching the first game of the world series, I’m blogging and the Incident Commander filed a report about the break in for Team Rubicon tracking purposes.
Can’t undo it and rather than sit here in my own head beating myself up for the poor decision making skills I demonstrated by leaving $1980 in CASH in my truck… I’m blogging. I want to write until I don’t feel violated and then I want to go to sleep and have stressless dreams.  hahahahahahhahahahaha…
There was a suicide in the Team Rubicon family this week.  Wasn’t someone I know, but it was hard to hear and we had some really candid discussions after long work days.  The leadership here knew him, really well.  I shared and we talked a lot. I had nightmares.
Today was the end of a 10 day operation where we helped 30 homeowners recover from a hurricane and, as one of the cool dudes I worked side by side with all week just pointed out, “We did a lot of good here, we met a lot of great people and we made a difference. Remember that.”
I rescued a kitten on Sunday.  Teeny tiny thing.  We found it in a paint bucket in a backyard where we were cutting up trees Matthew knocked down.
I tucked it into my pocket, took it to Petsmart to see the vet (they couldn’t get a temperature and said she was pretty weak). I bought kitty formula, tried to keep her warm.  I named her Myrtle. She died in my hands, wrapped in a warm towel on top of a sock-ful of warmed rice.  I was horrified.  But we talked about it and at least she died warm and cared about and not alone in a bucket in the dirt. 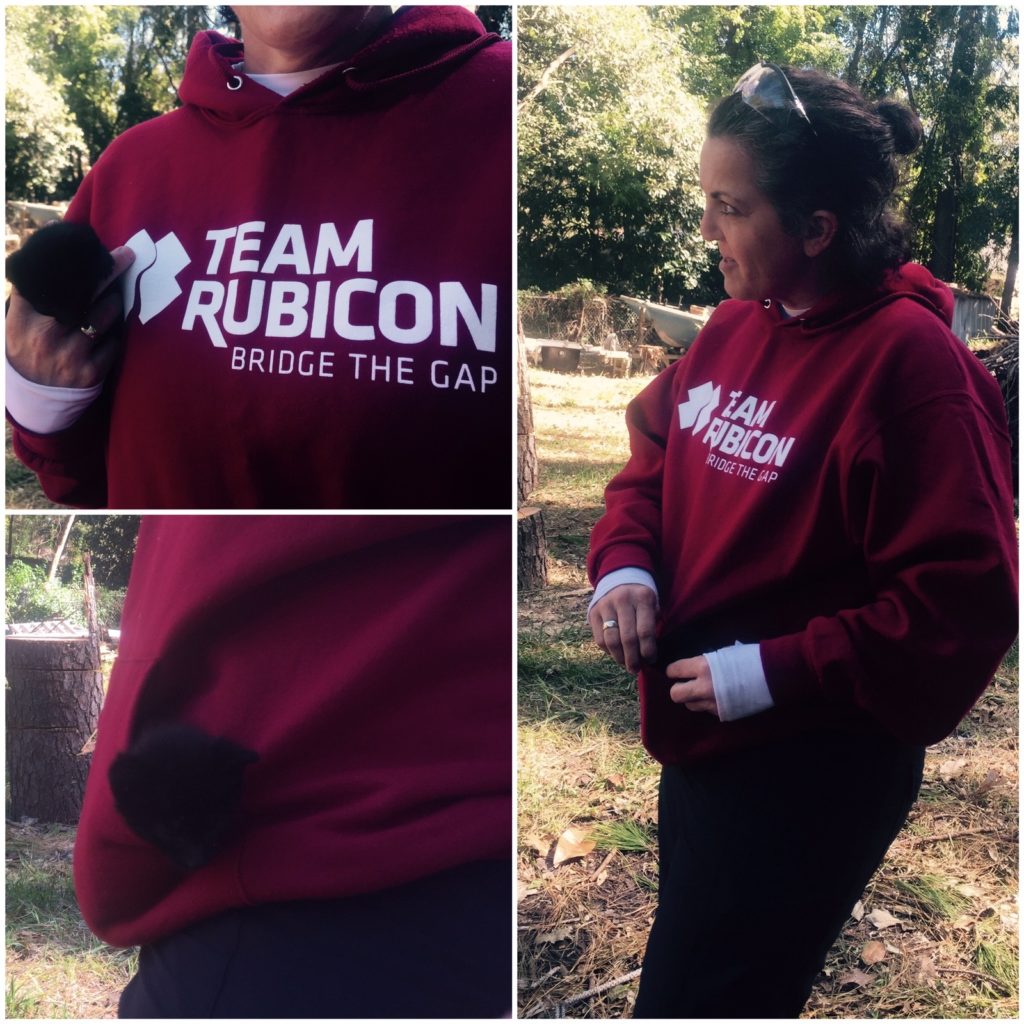 We did great things here. I choose to focus on that.  Click this video and see a glimpse of why I love Team Rubicon so much.

My buddy Charles saw my tweet and sent this note: “I hate when bad things happen to good people.”

I responded and said “After the summer I had, and getting ready to move, I just feel defeated. *there may have been an expletive in there.*

He said,  “You are not defeated. it is a setback, yes. But defeated no way. You are one of the toughest people I know.”

And then I realized,  he stole my money, but he didn’t steal my awesome week of serving others.

I’m going to sleep with that in mind.
Writing,
JH

3 thoughts on “Soup can and perspective”