18 months after moving here to work on a social media project at the United Nations, 6 months after resigning from a high paying, morale depleting, prompting me to question my integrity, federal position at the Department of Veterans Affairs, 2 months after recovering from a case of shingles that kept me undressed and woozy from Benadryl, (scratching until I bled in my sleep) for a month, I signed a lease in a small town in North Carolina.

I’m working freelance, full time, and can live essentially anywhere. I want trees, a parking spot and a chance to write.

I didn’t make the decision lightly. A few months of therapy, lots of “what if” conversations with smart friends (MQ-JH-KT).

The city is too much for me.  Too dirty, too expensive, too busy, too harsh, too far from most of my friends and family. I like some parts of it but I’ve started to feel like my humanity is being depleted. I’m done.

I’ve had some incredible experiences in this city and met some amazing people. For a myriad of reasons I’ve agnonized over the decision these past weeks leading up to the move.

On my way home from a going away dinner in Manhattan last night, any doubts I had were washed away as I rolled to a stop sign a half block from my apartment.

Some 20-something dude, fighting with his mom in front of a crowd of men on the sidewalk in front of a barbershop, erupted into the street and slammed his fist through the back window of my truck as he walked by. 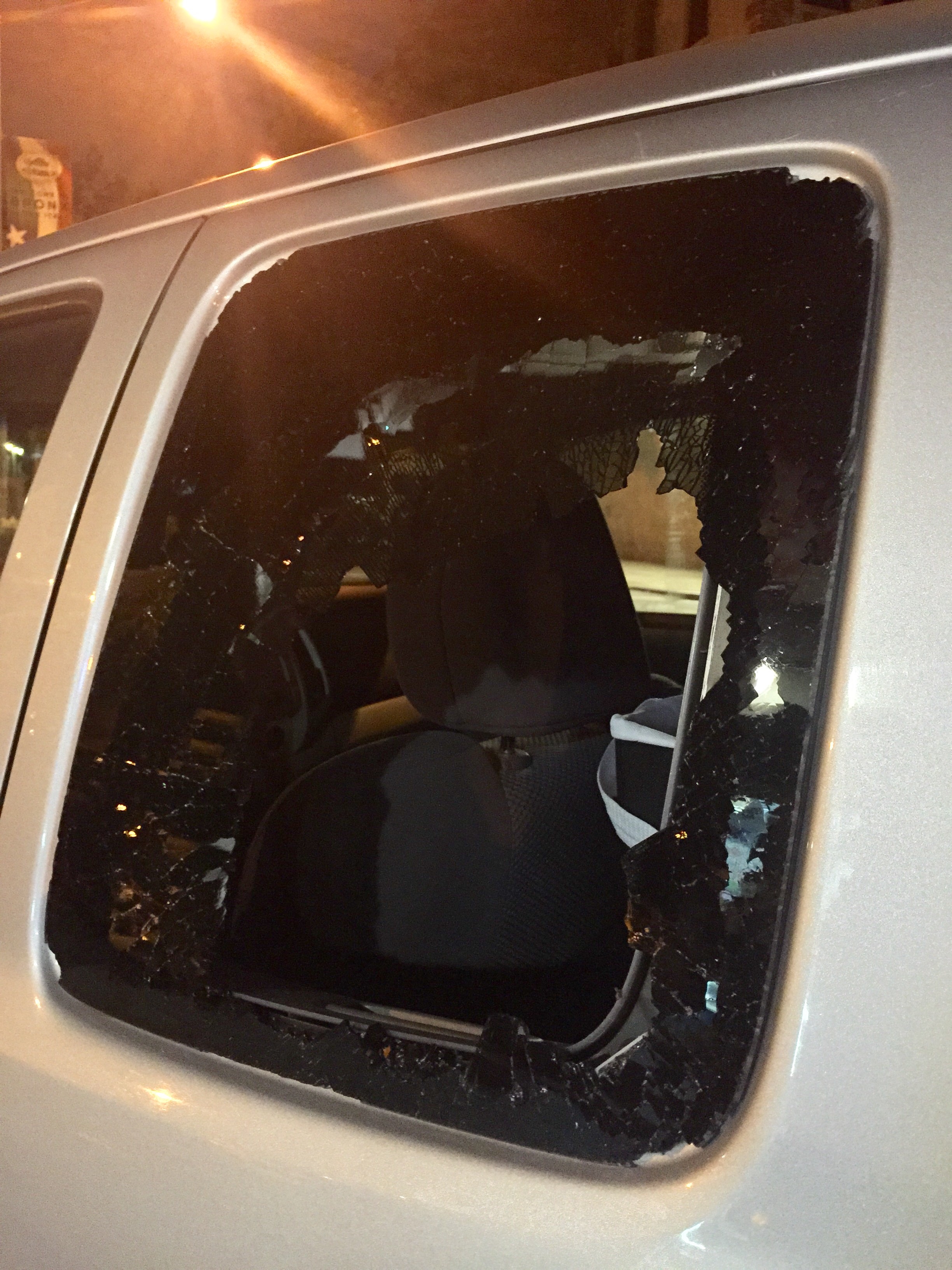 It took about 45 seconds after I slammed on the brakes to realize what’d happened. That wasn’t an IED; that clown punched my truck.

As my passenger jumped out I (might’ve yelled) told him not to chase that guy down the street and instead I confronted the dudes on the sidewalk.

I asked the barber what the hell just happened, who the hell that guy was and who knows what else I said. Much of it was long forgotten Spanish (with some perfectly pronounced obscenities.)

All they said collectively was “that guy is crazy” and “he’s fighting with his mom” and “don’t worry about it.”

Because what. the. hell?

“Yes. I’m ok. No. No one was injured. My ears are ringing but, what? No. No ambulance. Well, wait. There’s blood splattered across the side of my truck. Maybe that dude needs an ambulance.”

Done with the call I returned to the crowd on the sidewalk and and again demanded of the barber Julio, a guy I’ve spoken to several days a week since he opened his shop 8 months ago, what the hell that was about.

He said it was a family dispute, just ignore it.

“Ignore it hell; I just called the cops.”

It’s almost laughable now, but as soon as I said that, the dudes on the sidewalk disbursed like roaches when the kitchen light comes on.

Julio asked why I called as he grabbed the pole to roll down the metal door to cover the front of his shop.

“What do you mean why did I call? Dude shattered the window of my truck as I drove by…”

He said it was family business.

“How can you say you don’t know me, you speak to me almost every day and you were standing here when this happened.”

He said it’s just a family argument and I should go home.

I grabbed his arm, walked him the 20 feet to the corner to see the smashed window, the blood splattered across the truck and said “it stops being a family affair when he smashes MY window in. He’s not MY family.”

His tone softened and he apoligized.

He said he didn’t realize the guy hit my truck; he thought I pulled over to yell at them because he was fighting with his mom.

“No, dude. I pulled over in a shower of glass, ears ringing, wanting to know WHAT JUST HAPPENED.”

Right about now some guy walked up and said “that kids mom is my girlfriend; we live together and he’s off his medication. Don’t call the cops; she’ll pay for the window. They don’t want no trouble. It’s a $50 window, she’ll give you $200 right now.”

I pointed out, as a black and white pulled up, I’d already called the cops (right about the same time everyone on the street’d told me nothing happened and just go home).

The first cops on the scene asked what happened. Asked what the guy looked like, was wearing.

“20 something, Hispanic and bleeding, sir. Down there in the TD Bank parking lot, still arguing with his mom.”

One cop on the scene took down my information, the lieutenants all but did Rock Paper Scissors to decide who handled the paperwork, several cops took photos of the truck, the window, the blood, asked me some more questions. 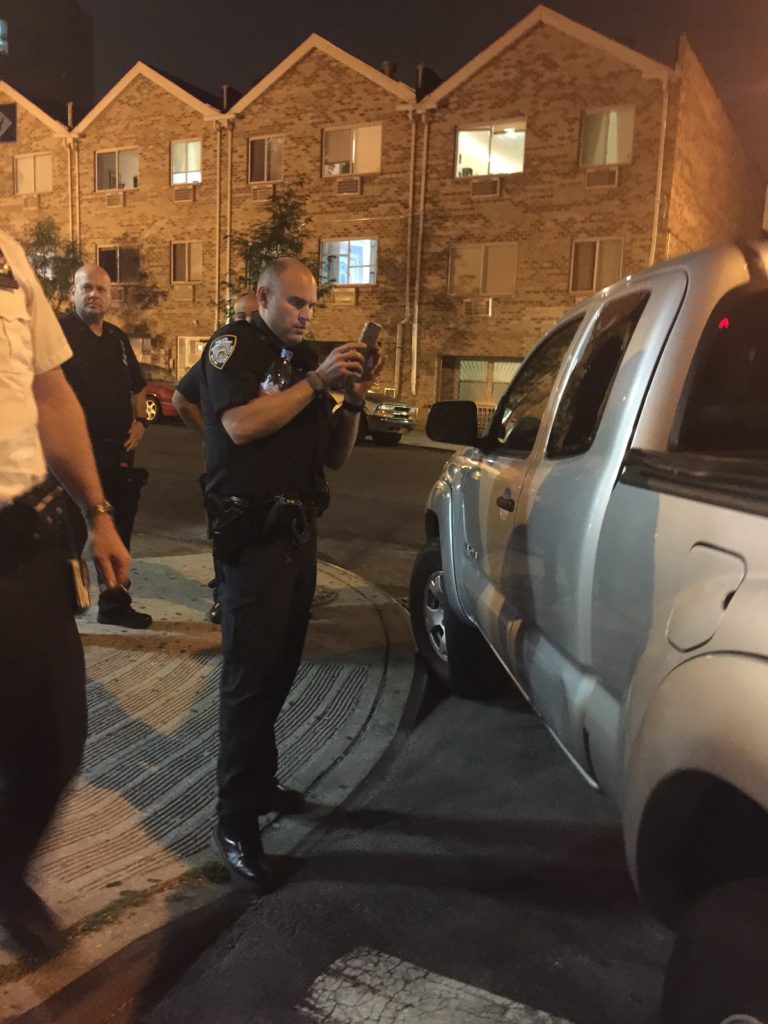 I told the lieutenant what the step-dad said re: off his meds. The Lt chuckled, said “that’s half the Bronx.”

By now the guy’s mom is standing on the stoop behind us, watching the situation wrap up.

Somewhere in the fray I said, sardonically, “I’m moving to NC Monday. Of all the luck. I almost made it out the Bronx unscathed.”

I asked the Lt to tell me I wasn’t an asshole for calling the cops to the scene and he seemed surprised.

“No, you’re not an asshole. You did what you needed to do. And you’ll need the police report to file an insurance claim. But you need to talk to your friend over there about whether or not you want to press charges.”

I bit my tongue.

If you don’t press charges, this never happened.

If you press charges, he gets arraigned, has a trial, has to pay for the damages…

“Do I have to decide that now?”

“No. The arresting officer and the ADA will call you tomorrow.”

As the scribe-cop finished taking notes the Lt said “be sure and take everything you plan to keep inside tonight; don’t leave nothing in there if you want to still have it tomorrow.”

After the cops dispersed I drove my truck the 100 yards to my apartment and the realized I didn’t want to stay there, I didn’t want to tape a trash bag over my window and go to bed wondering if my truck was gonna be further damaged overnight.

I grabbed my toothbrush, pajamas and Cafe Busteló and headed to Jersey.

I called my best friend Meg as I drove away, spewed all of my adrenaline fueled anguish in her ear “that cop told me to ask my friend…”

And she pointed out what the Lt. MEANT was “if you press charges, HE’LL still be in the Bronx while you’re enjoying slow life in NC” and suggested I call my attorney (aka: her dad) and get his input.

What I’ve seen/learned about the system here in NYC left me hesitant to press charges anyhow but DaddyBall confirmed: absolutely not.

“Refuse to pursue charges, and get a price quite before you file an insurance claim. That window probably costs less than your deductible. The real shame here is, you’re not a drinker.”

“What you need to worry about right now is how to calm yourself down enough to fall asleep once you get to Jersey.”

Phoned a friend, fell asleep at 2, woke at 7, covered the window with a tarp in the midst of a downpour, took a call from the arresting officer at 8, explained my decision not to pursue charges, listened to him explain why that’s a bad decision and that I better think about it until the ADA called me later today for a deposition. That’s 20 minutes of my life I won’t get back.

It won’t cost you anything.

He should pay for what he did.

We already have him in custody; why not press charges?

I wrote this blog on my phone, in part because my poor Mac finally died last month and in part because I’m waiting for the ADA’s call and want to answer it as soon as it rings.

It came at 2:30 after several calls from the arresting officer telling me why the call was delayed and why I should press charges. “They do the cases where the victim shows up first…”

The ADA asked a few questions before I stopped him and said “I have no desire to pursue charges, sir.”

“Because I don’t think a $200 window is worth derailing some guy’s future. I don’t think the guy should have a criminal record because he lost control of his temper last night.”

Did anyone call you or intimidate you into dropping these charges?

“No, sir. I mean, my attorney can be pretty intimidating but it was late when I called him last and he was pretty succinct when we discussed the situation and the ramifications. No. I have no desire to pursue charges.”

You understand if you don’t pursue charges today you can’t change your mind, we can’t prosecute and this won’t show up on his record, anywhere.

You understand when we hang up, it’s like this never happened.

Can I ask? Why are you making this decision?

“I called the cops last night because I was shocked and angry and I didn’t know what else to do. I appreciate their response, and their efforts, but I’ve punched a lot of … things in a previous lifetime. Broken a few knuckles. I’m not willing to change the course of someone’s future for a $200 window. People deserve second chances, sir. If you talk to this dude, tell him I said make better choices.”

I’m impressed. You might be the nicest person in the Bronx, Jennie.

“Well, only till Monday. Then I’m gone.”

So. I’m working from Union, NJ today. Have an appointment for a new window to be installed in the morning (special order, out of state) plans (away from the city) for the weekend and then Monday I pick up the u-haul trailer and I’m outta here before the Big Apple can take another bite out of me.

If anything else happens I’ll need a straight jacket instead of directions to North Carilona to pick up the keys to my new townhouse. 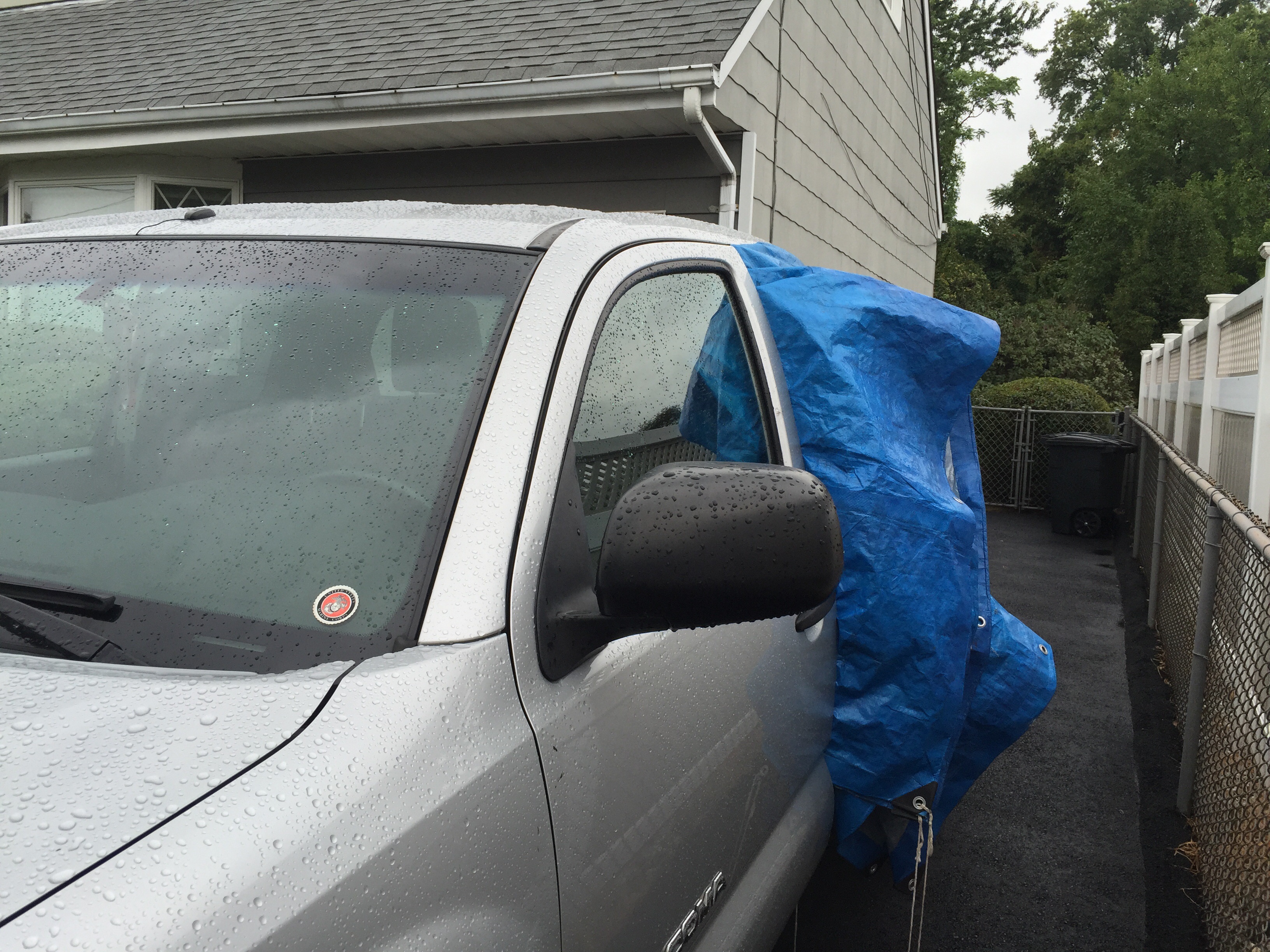