I listened to a great (new to me and I’ll be back for more) podcast this morning. Authorstrator Mark Pett joined Stories Unbound to discuss, among other things, the act of creating, daily.  He cited Steven Pressfield’s book, War of Art, calling it a must read for creatives.  The point that stuck with me was, “Put your butt in the chair.”

Instead of waiting for inspiration to strike, and then deciding to write or create, he shared, make it a point to sit down each day prepared to write or create.  The words will come.  That’s a tough one for me.

The host, Shawna JC Tenney, an author herself, said she makes it a point to get dressed each day like she’s going to a real job. Then she sits down at her desk to create. That’s brilliant.  Since I’m new to the concept of working from home (and even laughingly used #freelancenopants a few times) I like the idea of getting dressed, being deliberate about working. Especially because what I’m doing now isn’t working.

My problem is, regardless if I’m wearing dress pants or exercise clothes or no clothes (Hey. I’m single and I live alone, it happens.) I sit down and immediately second guess the validity of my thoughts, wonder if they’re funny, wonder if they’re worth sharing.  Instead of second guessing, I should just write them down.  I understand that more today than I have in a really long time.

Pett talked about new artists worrying about people stealing their ideas. He laughed, said there’s never a shortage of ideas. It’s what we DO with them that makes a difference.  He shared a quote widely attributed to Steve Jobs: “Real artists ship.”  Jobs was referring to the idea that everyone has ideas but real artists deliver them.

I have a whole series of ideas floating around in my head: a children’s book about farm animals with big personalities and high adventures (after my month at the farm), a comic strip based on the Twitter feed I kept the summer I stayed with my grandma and helped her recover from an injured foot, a collection of short vignettes about awful dating Website experiences…

I have so many stories to tell. Some are fiction, some aren’t. Some are redacted, some are embellished.  I’m going to use this space as a a create every day space while I work on shipping some of my ideas.

The irony of listening to the podcast today and being inspired?

1: I have a signed copy of the War of Art; Steven Pressfield mailed it to me in Afghanistan but the concept was new to me.  #thanksTBI
1.1 I have to reread it, obviously.

2: I didn’t sit down and write today. I did a lot of productive things, and I meant to … but I waited until 11:40 PST to knock out the second installment of “I’m going to blog every day.”  #almostfail

Tomorrow morning I’ll park my butt in the chair.  Possibly still in exercise clothes.  Not the ones I’m wearing now, though.  They endured 60 minutes of spin and 45 minutes of running at the YMCA tonight.

The cycling instructor walks around at the end of class with a cooler full of orange slices.  After an hour of grinding up hills and adding “one more level” it’s amazing how satisfying one orange slice is.  Feel like I’m making up for all the team sports I never played as a kid.  That’s a whole separate post, though. 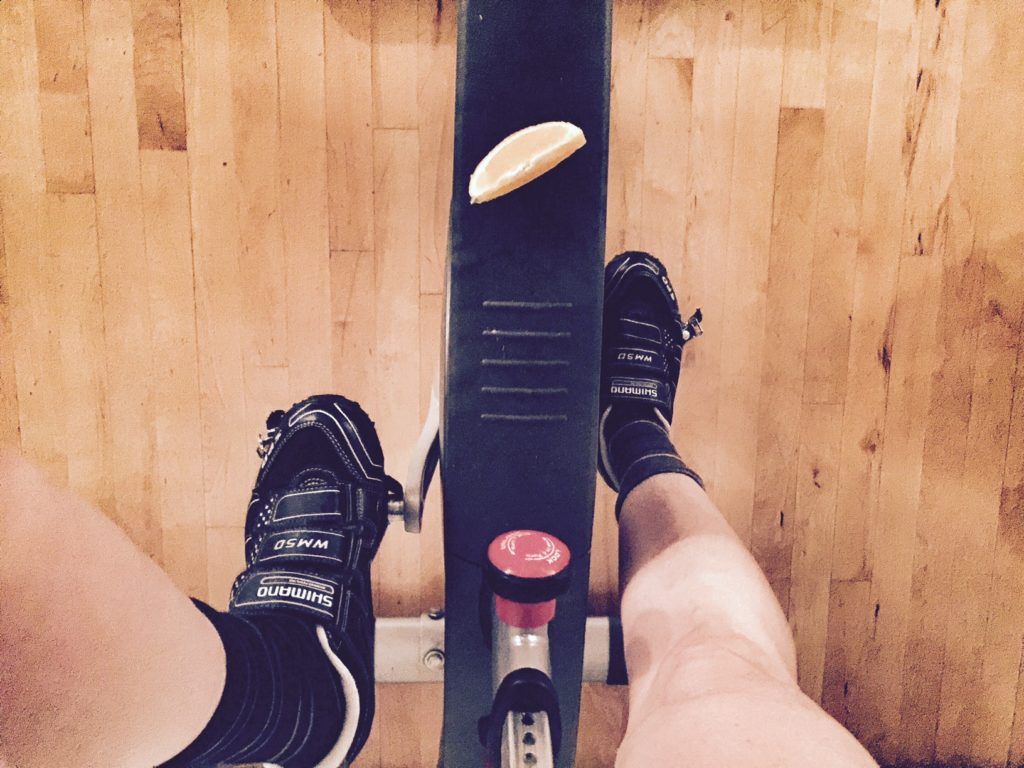 One thought on “Putting my butt in the chair”