“I would rescue her from old avocados.”

A Tweet from a stranger in reference to a person I know but haven’t ever met.

It’s a funny line.  Especially if you know anything about how gross avocados are when they’ve turned bad. Aged. Grown old. Gross. But there was more to that line than presents itself in 34 characters and 6 spaces.

More on old avocados in a minute but first let me explain.

I jumped into the middle of a Twitter conversation tonight, and the opening line of this post was Tweeted in response to something I said about the person I know but haven’t ever met.

Side note: I’m almost certain I “do Twitter wrong.” I only follow a hundred or so people and have about a third of the accounts I do follow muted… so I see just about EVERYTHING that hits my feed.

And I actually read it.

I think it reeks of   voyeurism (thanks Google; I was killing the spelling there)  and yet, that’s why people have conversations on Twitter, right? To share thoughts with others.

Maybe not the guy wh 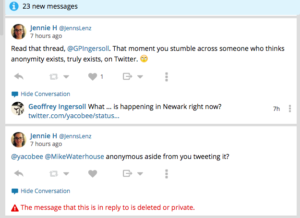 o tweeted a photo of a “terror suspect” being arrested at a Jersey train station tonight and then proceeded to ask the reporters to “please use the photo anonymously” when they descended on his feed asking for permission to publish the image of the “terror suspect.”

His Tweet’d been deleted when I returned for a screenshot. Guess he figured out the whole #notreallyanonymous thing.

For a long time I used Twitter simply as a news aggregate; reading pieces from hither and yon on a variety of topics.  Most of the accounts I followed were reporters I’d worked with and outlets and agencies I was familiar with.

Topics I was passionate about, things I was interested in.
Twitter was my Pocket before Pocket was known to me, essentially.

Then I started adding people (gasp!) if I liked what they tweeted. It was weird at first. Weird for me, anyhow. My personal social media habits were pretty draconian for a long time.

Hahah. I told people when I refused their requests, “The people on my FB are ACTUALLY my friends. You and I aren’t friends. So, no.”  I communicate for a living and actively (now) proselytize about how incredibly effective social media is for communicating with your audience. Not at first and NOT for my personal profiles. So much has changed.

Imagine then, adding complete strangers on Twitter because they said something funny.

I took a break for about 6 months.

And one day I realized our Twitter feeds, like all things media and most things political, are items selected from a menu we design ourselves.

I was responsible for the very bullshit in my feed that’d come to stress me out.

And I scrubbed it (almost) clean.  Started over. Kept the dudes whose careers I’d followed for a while, Dan Lamothe, CJ Chivers, Geoff Ingersoll. Kept WashPo, ditched all of the MilitaryTimes feeds. Found NPR, added WaitWait Don’t Tell Me. Added Chad Garland, ditched Vice but I run back to them from time to time. Followed BBC.

I kept one of the first accounts I ever followed; a Marine I served with years ago who follows some sad pro sports teams ha! (he lives Upstate, it’s not his fault) but his passion for them is compelling, his dad-isms are hilarious and I enjoy his take on current events and politics. Also the Semper Fi tie binds us.

Tom Morello and Cory Booker are among my favorite accounts. And Justice Willet. A rocker/activist, an incredibly passionate, vegan senator and a deliriously funny Supreme Court Justice from Texas. =|

Add to that a whole bunch of wickedly funny, casually uncouth, well educated (for the most part) human beings who discuss national security, foreign affairs and domestic issues. I read a lot. Ooooh! National Parks are amazing on…  Twitter. A young French woman living in California who makes me laugh and with recent events, tugs at my heart. A witty retired Army Officer who resides on the net as DoctrineMan feeds me just about allll the military news I need/want/can handle and it comes with a side of snark. Win.

I follow my brother and some of his friends. They live in a world vastly different from mine. It’s a fascinating space to dip my toe into from time to time. Actors, models, NASA scientists, photographers, comedians artists–Hollywood.  Eric and his friends–people from his feed added the balance I didn’t realize I needed in mine.  They’re funny and philanthropic and witty and smart albeit almost freakishly attractive. (not that my friends are unattractive, but his are literally models and fitness stars and actors.  That they’re nice and funny and smart and normal makes the things they inject into my feed even better.

I’ve met a few people from Twitter IRL this year, had them to my family’s farm, cooked dinner, drank Japanese beer; walked them through my favorite mixtape playlist. After my aunt died I talked one night until I fell asleep (4 hours) and I’ve had some incredibly therapeutic conversations … as a result of Twitter.

I’ve made actual friends. On Twitter.  Connected with human beings, learned things, debated, laughed, cried. (took more than 140 characters, but you get my point) Twitter became the place I go to interact with humanity when I feel like I’m the only one in the room.  I’m alone in the room a lot unless I’m outside.

And that is why, even if it’s socially awkward, I’ll keep doing Twitter my way. My inbox contains wisdom,  snark, insight, confessions, innuendos, science and life. *I delete the vitriol when it, infrequently lands*

I should mention, I block like nobody’s business. The day a prominent terrorist group found something I wrote and issued some sort of Twitter fatwāh marking me for harassment, my feed was flooded with video and photos of beheaded Westerners.  For almost days on end.  Yeah. No thanks. B. L. O. C. K.

I’m no one (stay with me) and I get some strange interactions.  I love the block function on Twitter.  Can’t imagine people who have an actual presence and a following–wonder what type of trash they block.

I often remind myself in regards to all social media, I’m dining on what I selected from a menu I created.

Sometimes the voice in my head says “Hashtag, you’re doing it wrong” or “Why are you responding? Why are you listening/following along with strangers” or “what if someone reads that; sees your name there?”

I don’t listen to that voice anymore.  I write what I believe/think/feel and for the most part my filter works. I still listen more than I talk. If you know me, I laughed just as hard as you did after I typed that.

And that brings us back to old avocados.

I jumped into the conversation tonight when I read “I rescued her.” I asked him if it was a euphemism or if she’d actually been trapped in a bathroom at a recent convention and needed help.

The conversation continued and he responded with the line about old avocados.

I love the animals too, lots of goats and kittens and penguins and puppies make their way into my feed.

The people who actually know each other, reach out, check in and cover down keep me interested.

And so I know enough about this woman on Twitter I’ve never met to know she struggles with anxiety.

And that she’s hilarious and fabulous in spite of it. And I know, based on old threads I’ve read (it’s not creepy, hush) and conversations we’ve shared, the avocado super hero is someone she met on the internet, connected with in a real way and formed an incredible friendship with over a shared love of being a nerd.

And in a variety of ways he’s already rescued her from old avocados.

Because communication and connection. 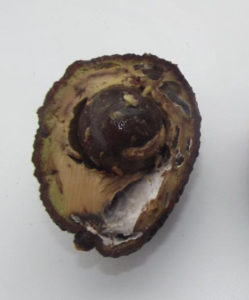