I spent a chunk of my day working in my garden.  And by garden I mean the ground that flanks my 12×12 cement patio and the 20 or so pots I bought at estate sales last September. And the shoe organizer hanging on the fence. Because vertical gardening, obvs.

There’s something incredibly relaxing about getting my hands dirty. That seems to be a theme; dirty hands make me happy. Lest I digress… 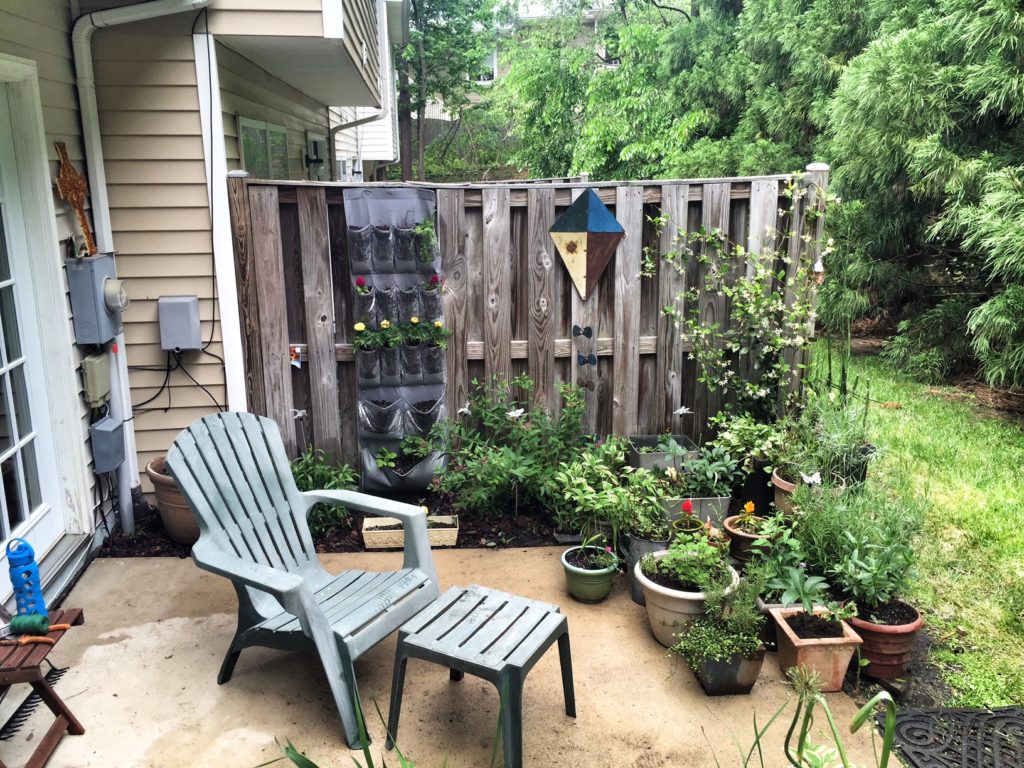 Today was the second round of “planting” I did.  In my head I say I planted crops, but really, it’s just vegetables and flowers.  Between the edges of the patio, the bigger pots and the shoe organizer on the fence (it gets the best morning sun) I’ve planted:

I planted some last week and then decided this weekend to take advantage of the ground that was exposed after I talked the HOA landscaper into removing the two GIANT holly bushes because they blocked the sunlight and the hose.

Today I planted in that space, too. 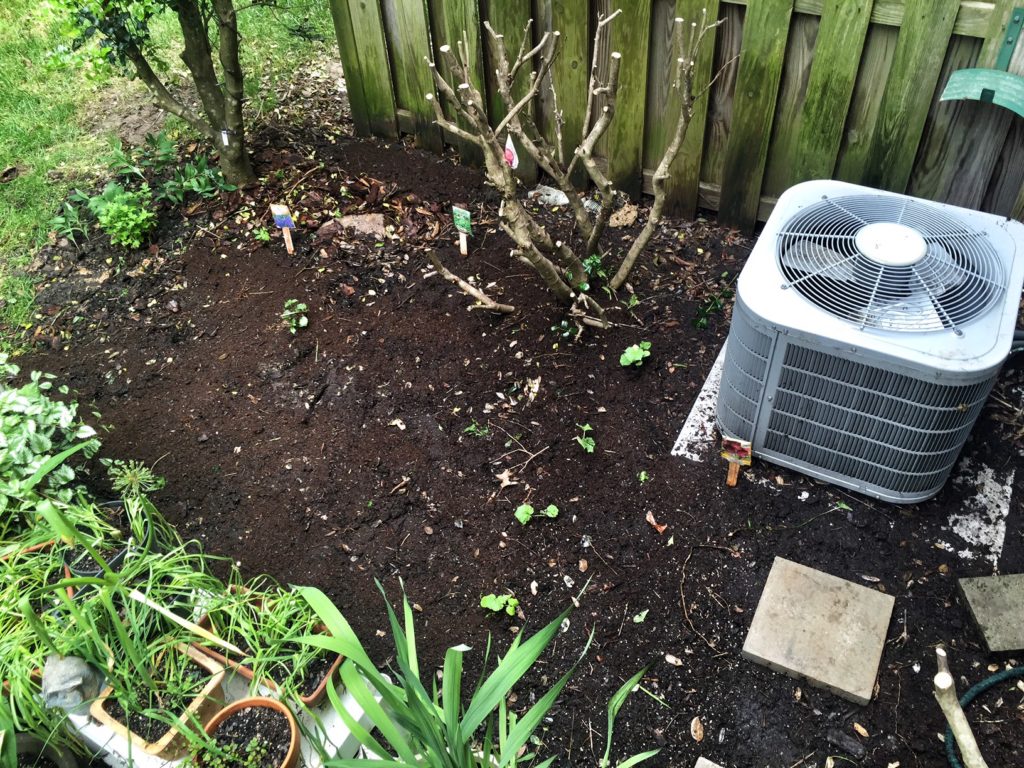 I’m hoping the heirlooms will grow “up” that holly stump. I’m prepared to install a cage, as needed, but for now I planted tomatoes at the base of both stumps.  In this space there are: lavender, sunflowers, sweet corn, brussels sprouts, tomatoes, beets, cucumber and squash.  Yeah.  A bit overzealous, I know.  We’ll see what grows and what doesn’t. I actually planted corn … all around the garden/patio just to see where it would grow. Heh. 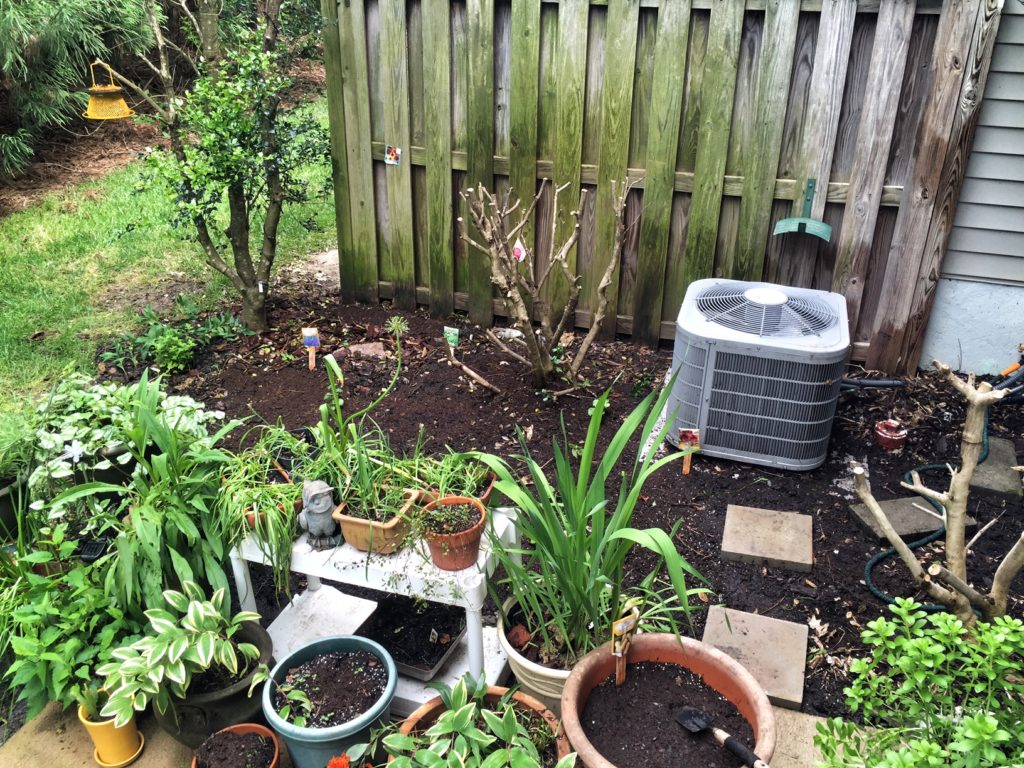 Last night I added black sunflower seeds to the cute little yellow feeder (estate sale) hanging in the tree.  This morning I walked out and found a squirrel, reclined on the fence, eating seeds and looking like I was the one who didn’t belong there. I relocated the feeder.

Talked to grandma tonight, wished her a Happy Mothers Day and she commented on the garden, asked if I was serious about working for a landscaping crew this summer while I was in school.

“Yeah, Gram. If I find one that will hire me part time? I’m in.” I said this as a joke last week but really? I might do just that.

That’s great, Jenn. You know, your mother earned a landscaping certificate when she was a guest of the state.  She absolutely loved it. Kept a garden while she was away, too.  You get that from her, you know. You take after her more and more as you get older.

“I mean, Gram. You mean while she was in prison for … grand theft auto, trafficking heroin and solicitation, right? Thats when she earned certificates in landscaping and a degree in horticulture. And kept a garden?  Riiiiight. Ok, then, Gram.”

Meanwhile I was a teenager, paying taxes. But that’s a whole separate blog.

I’m not saying she was a great role model, Jenn. Just pointing out she liked getting her hands dirty and working with plants and so do you. You certainly don’t get that from me; she didn’t either. I see many similarities there. I think landscaping will be a good fit.

Happy Mothers Day, Gram. I always giggle when she remarks about me getting my hands dirty. She actually shudders.  She’s got the tiniest, softest, perfectly manicured hands. I definitely didn’t get it from her. I see much of Gram in me, but not dirty hands.

In truth? I know my mom loved plants; that’s something my brother and I both kept with us after she died. He has a bunch of her plants growing in his garden in Hollywood. I left for Afghanistan after the funeral; couldn’t take one with me. My girlfriends still have the ones I forced on them after she died, though. And so, thanks to nurture vs nature, I guess I celebrated my mom today after all. 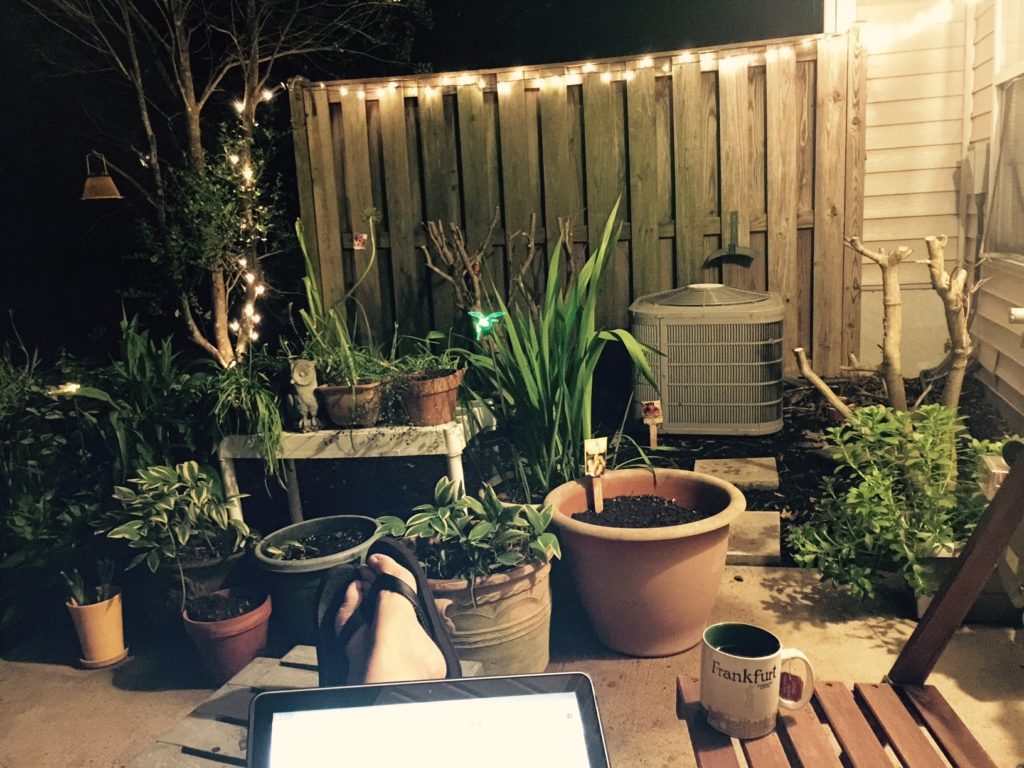 Funny aside? I was sitting there working on a friend’s mom’s resume and noticed, out of the corner of my eye, a giant slug.  Like, didn’t think it was real at first. I photographed it and relocated it. And then there were seven.  Clearly I was in their space.  Inside I went, to write tis blog while it was still Sunday.