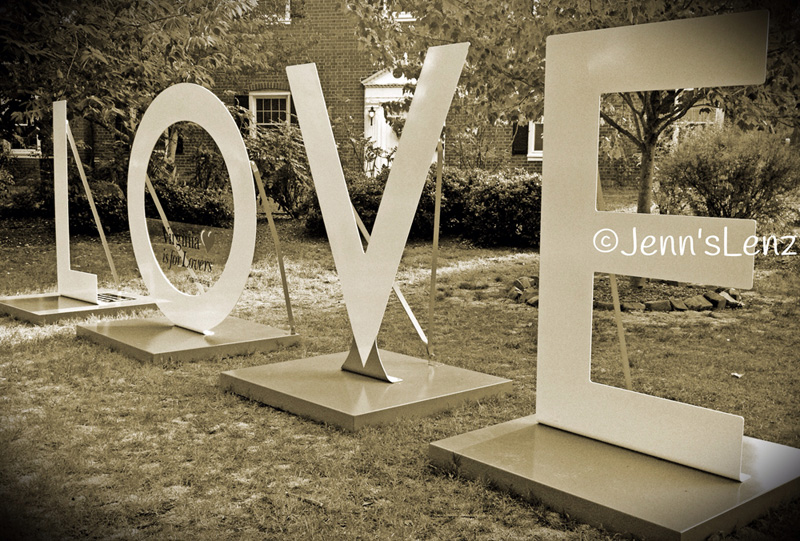 This time last year I was so deep in love I couldn’t see straight.

I wasn’t dating, wasn’t even looking and yet, there he was. A rough around the edges, battle tested, U.S. Marine. The kind of guy I said I’d never date again. It started with a group email. Then progressed to one on one emails. In a short time it’d grown to hundreds of emails (thousands and thousands, really, thanks Gmail archives) and eventually hours on the phone. And Skype.

We laughed endlessly and shared intense, intimate details of our lives. We debated science, religion, politics. We cross pollinated our iTunes playlists.

Yeah, it was 2012 and we sent each other ‘mixtapes’. (I wonder if Anthrax, Jamey Johnson, Evans Blue, Pop Evil, Johnny Cash, NIN, Mark Collie, The Kills and Kanye West will always make me cry.) 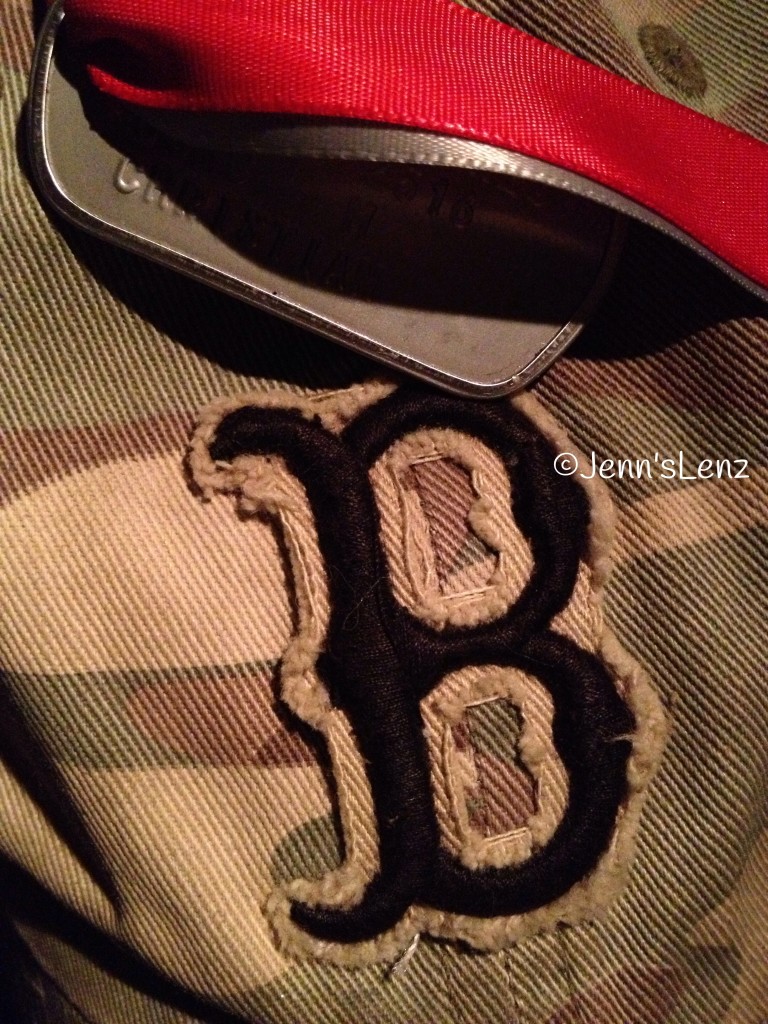 The BoSox cap I still wear from time to time is his. He mailed it to me a few months before we finally met. It smelled like him and the gesture was so very intimate. I fell in love with him, holding that hat, talking on the phone.

This isn’t about being in love, though. It’s about moving on.

A few weeks ago I tried to find a bridge in Bowling Green, Kentucky.

I’d found the bridge accidentally, a year ago, with him.

He didn’t laugh when I’d said I often longed to just pick a country road and follow it with no destination in mind. I’m from the city… little more in life excites me more than taking pictures of NON CITY STUFF.

He grew up without running water in the country. An avid outdoorsman, he laughingly assured me there were worse things I could suggest than ‘fill up the gas tank and meander through the countryside’.

He’d never been to ‘the BG’, and I wasn’t very familiar with the area, so we just drove. 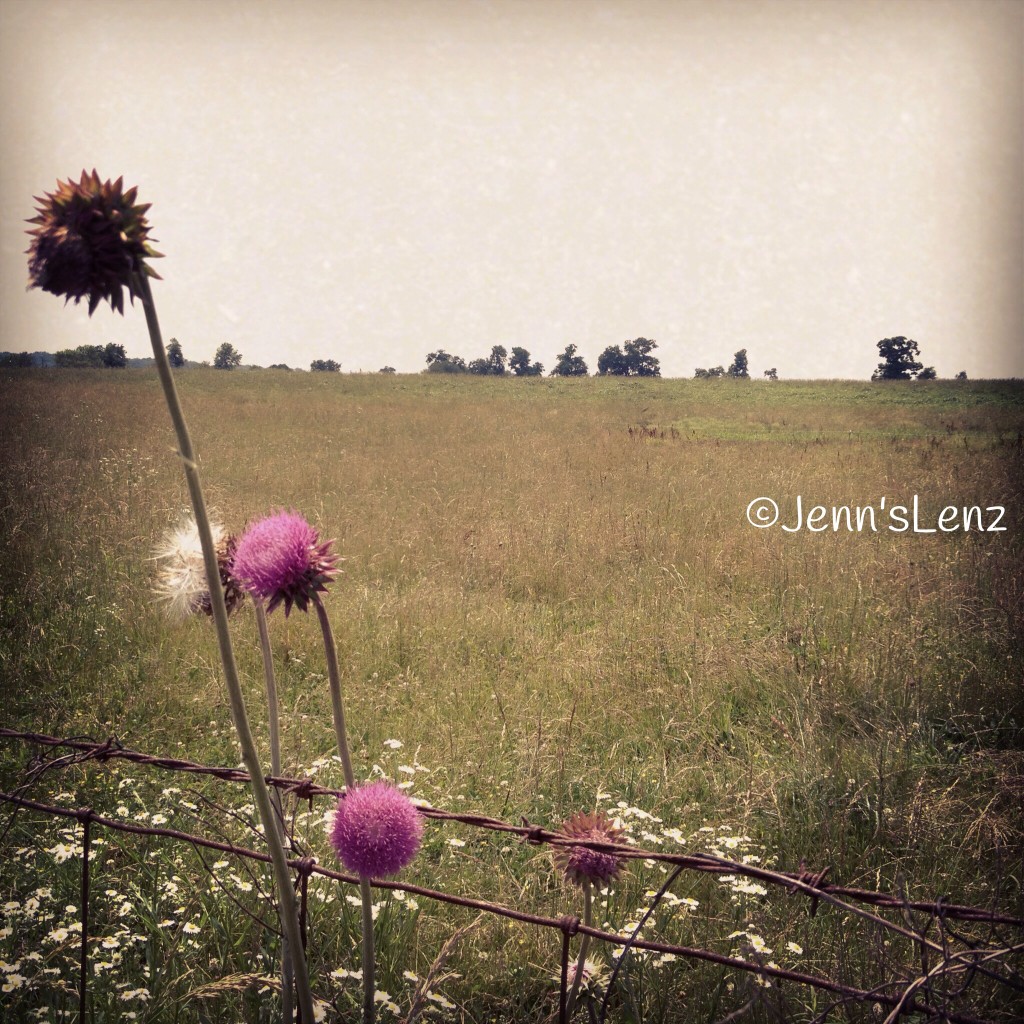 After an hour of traversing roads with no actual markers, we found a bridge. It was pretty. Seemed like a cool place to park and explore. As is often the case, I took 198 or so photos. Fish, pretty logs in the water, WAS THAT A FISH?? Spiderwebs, flowers… ARE THERE FISH IN THIS RIVER?

I shot one of the bridge. He took a photo, too. One(1). He snapped a photo of me knee-deep in the water trying to photograph a fish. I’M SURE THAT WAS A FISH! (That’s not a river, Jenn. It’s a creek, and yeah, that was a fish.)

And so. I liked the bridge shot, threw a black and white filter on it, posted it.

Made it my desktop photo. 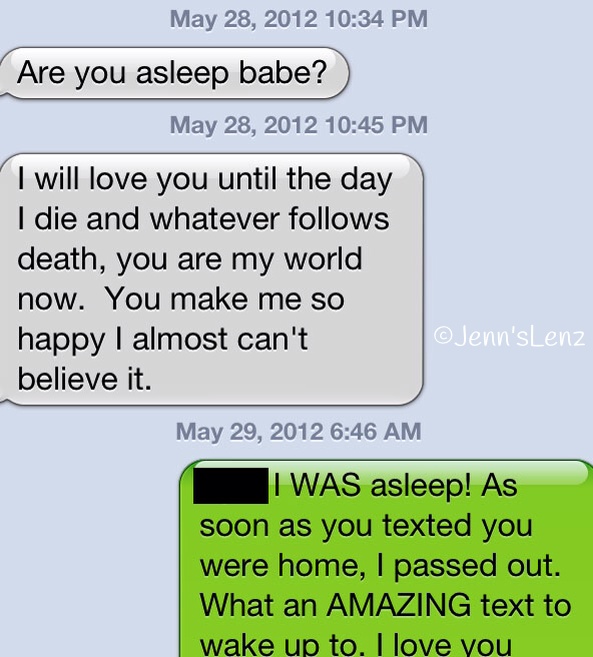 The relationship grew, fierce and deep. We spoke of forever.

And then it abruptly ended.

Two weeks ago I flew to Kentucky and drove to Bowling Green. In a thunderstorm. Raw-emotions barely in check because late the night before I’d finally finished pouring my heart out on paper.

Determined not to yield to the torrent of tears just below the surface, I set out to find the bridge. Once I was in Bowling Green I drove 15 or so miles down Scottsville Road and turned right on one of the rural roads. (Notice I didn’t say what direction down Scottsville Road? I drove “that way” from the freeway. Land navigation has never been one of my strengths.) Then I drove for about 20 minutes before I was crying so hard I had to pull over.

When I was done crying (ha!) I kept driving.
First, though, I snapped a photo of the windy road, shrouded in trees, glistening in the rain. I tried to photograph some cows in a nearby field but one of then charged the fence and freaked me out. 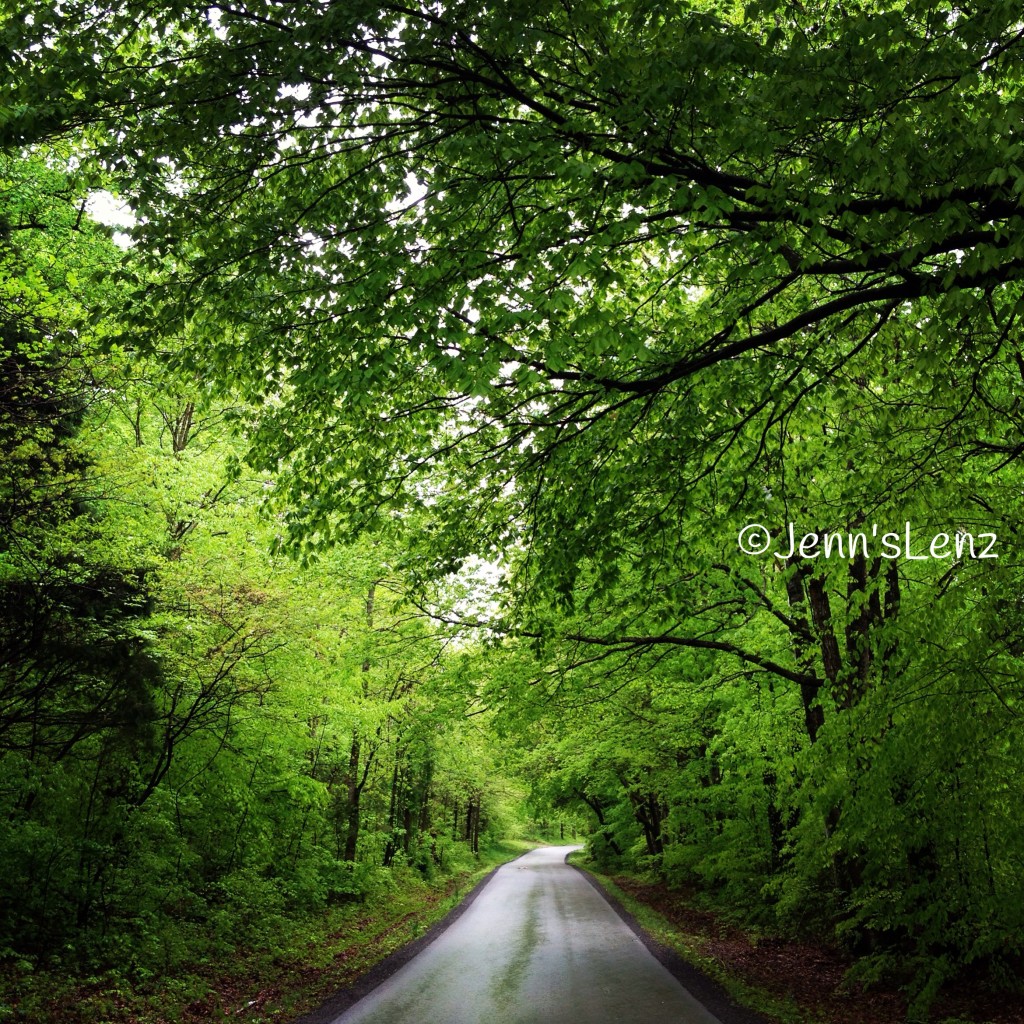 And so I kept driving, randomly turning down roads that looked familiar. After about two hours I was so lost my GPS suddenly declared: “You’re lost.”

Not really, but after two hours of driving in the rain “can’t get a signal right now” might as well read:

YOU’RE LOST AND YOU’LL NEVER EVER EVER FIND YOUR WAY BACK!!

Exhausted and ugly crying (Seriously. My eyes swell shut, my face turns various shades of red and white, I lose the ability to breathe out of my left nostril… I’m sure my mascara had long since mingled with my Chapstick. It’s not pretty) I pulled off onto a ‘side road’. 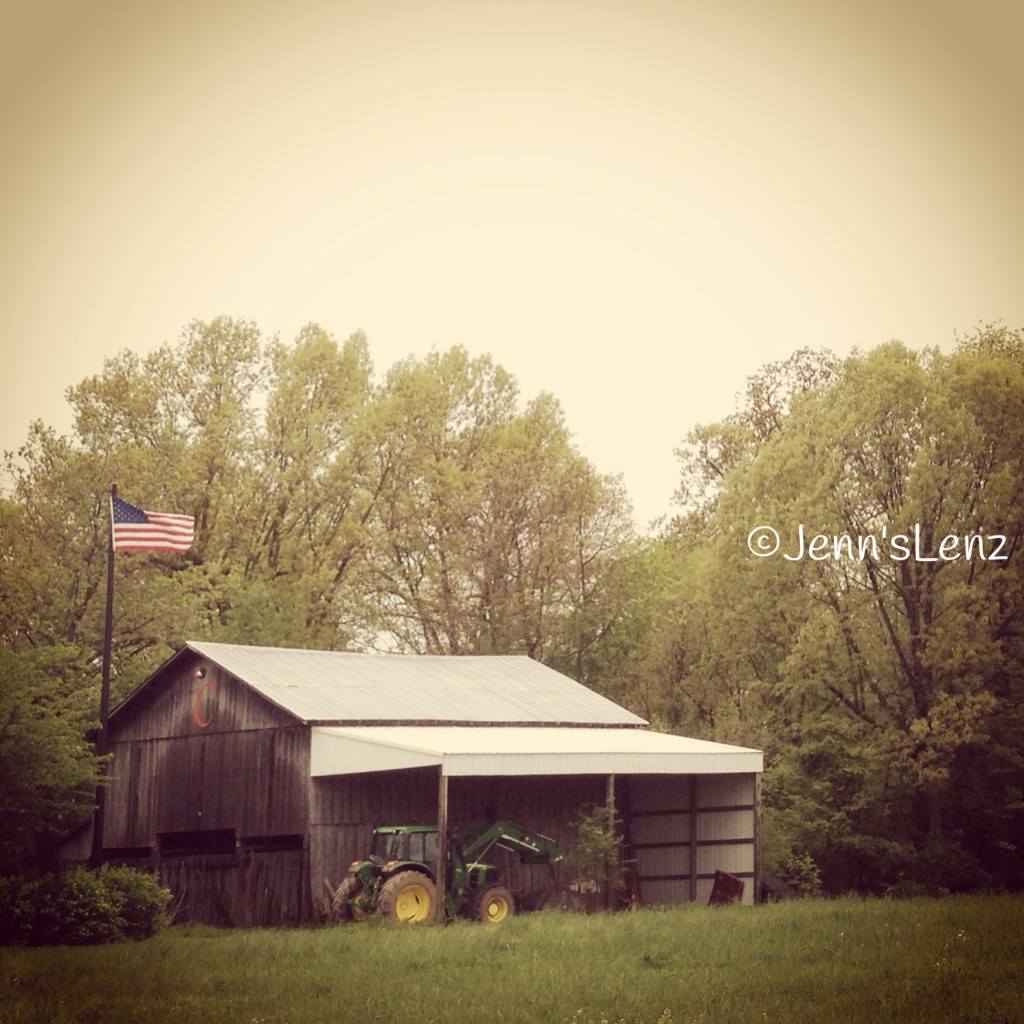 Mind you, my sensible mind knows in the country, side roads are actually driveways.

I didn’t see the farmer until he was about 100 yards away. In a brief, rational moment I realized throwing the car in reverse and driving away would be rude and possibly get me shot.

(My first side road experience was about 50 miles outside of Pitkin LA, when I was 20. It included the business end of a shotgun after slipping into the woods to pee. Don’t judge me.)

This isn’t about trespassing, though. It’s about moving on.

Never mind it was a “foreign” car with personalized plates… they’d find me.

So I sat there and tried to stop crying as he approached.

He wasn’t armed, simply asked if I was lost.

I got out of the car and tried to explain why I was parked at the end of his driveway.

I’m sure what he heard was “Gasp, hiccup, bridge, in love, and, and, and, and, divorced, PTSD, custody battle, convoy, Iraq, angry, shared so much, waaaaaaaaaaaah, hiccup, lost, stopped taking all of his medication, told him if I had the chance I wouldn’t pick to fall in love with him again because it hurt too much, suicide, angry, didn’t mean it, didn’t say goodbye, wrote this letter, want to leave it on the-the-the b-br-bridgeeee…”

He silently handed me a soft, clean handkerchief which I immediately and thoroughly defiled.

Without batting an eye he produced a cell phone, had a brief conversation I couldn’t hear, hung up and looked at me expectantly.

Because I’m about as obtuse as it gets at this point, I handed his handkerchief back to him. That’s what he was expecting, right?

He pocketed it without hesitating. Charming.

His expression didn’t change and he said, “Are you ready to hear what I think?”

I’m trespassing, lost, sound like I should be committed and you have a pocketful of my DNA.

Yes’sir, I’d say I’m ready to hear whatever it is you have to say.

“I’m sorry about your friend. The truth is there are some things in life the good Lord dun’t mean for us to ever understand. It doesn’t sound to me like you could have saved him from himself. It sounds like your friend was not well. But here, right now, it seems to me the good Lord is sending you a pretty clear message, young lady. You didn’t find that bridge because you’re not supposed to go backwards in life. You’re supposed to go forward. I think instead of looking for that bridge you need to jest [sic] look up and see something lies ahead. Something always lies ahead.”

By now his wife had arrived. With a smile that suggested she was used to her husband bringing home stray puppies and splotchy faced-women she wordlessly handed me a glass of sweet iced tea with mint leaves in it and held out a box of tissue.

She handed him a map.

He took the map and asked if I wanted him to point me to the bridge (less than four miles from here, as the crow flies) or back to town.

He asked if I wanted to leave my letter there.

“Your friend will jest as likely read it from right there under that tree as well as he will from under that bridge, young lady.”

Which is to say not at all, but it was better than laughing at the 25 tear-stained, loose-leaf pages I was holding—or letting me drive away with them.

But I needed to say something because the last heart-to-heart conversation we had included “To answer your question, I wouldn’t do it all again. Nobody willingly enters into a relationship knowing it will end up with their heart smashed. Don’t be crazy.”

He was dead the next day.

This isn’t about crazy, though. This is about moving on.

I didn’t attend the memorial service.

And didn’t attend the funeral.

Instead I wrote down all the things I wanted to say. Used my words to express my anger, my love, my angst, my apologies, my appreciation, my thankfulness, my disappointment and my forgiveness.

And then I buried it under a farmer’s tree, somewhere outside of Bowling Green, Kentucky.

And moved on. Because something always lies ahead. 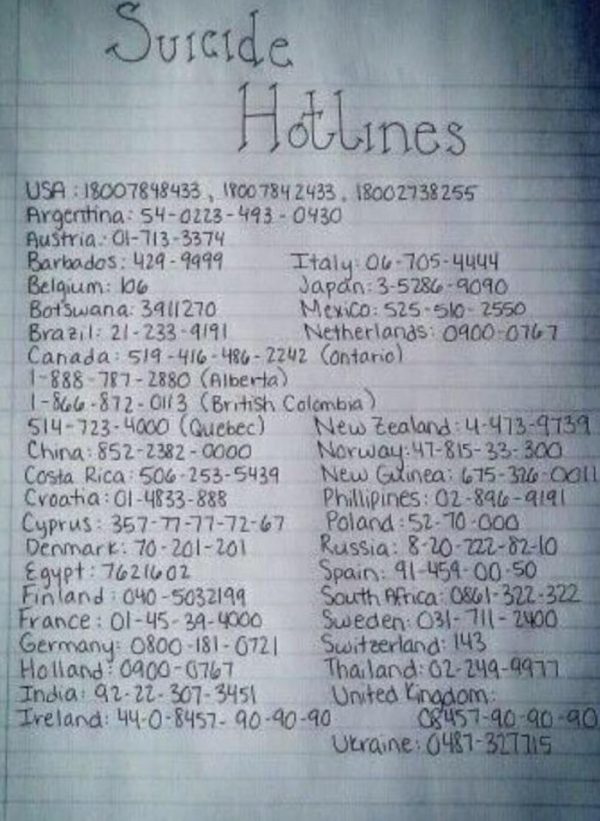 It’s been three years since I wrote this. I haven’t forgotten him, or the love we shared. Life has a way of continuing, and time has a way of mending broken hearts; healing wounds. (cliché much?) He makes his way into my thoughts and sometimes my dreams and when he does, I try to focus on the positive aspects of our relationship. If you’re stuck, need an ear or advice and don’t happen upon an old man on a rainy country road, call: 1-800-273-8255. Talk to someone. Or listen. Suicide doesn’t end the pain; it transfers it to the people who love you the most.

You’re worth more than you realize.  Make the call.

2 thoughts on “Moving On: Heartache and healing in the wake of a suicide”