Habitat for Humanity was here loading steadily for a solid hour this morning and I need a nap. That was simultaneously emotionally exhausting and exhilarating. Getting rid of everything and moving is harder than I expected.

I don’t have a single piece of furniture left. I’m sitting on the bottom step as I write this. 98% of my decor is gone. I kept a tray of decorative balls, an antique globe and two 100-year-old typewriters.

Oh, and some antique books. I have the complete works of Charles Dickens, leather-bound and illustrated, inscribed Merry Christmas Annie, Love Papa, 1806. What bibliophile parts with THOSE?

I kept photos I’ve taken and had printed on slate, metal or canvas.

All the rest of the decorations? Gone.

Blankets and throw pillows and down comforters and duvets? Gone.

Eight weeks ago I had table space to accommodate 20, a kitchen full of all the things to cook for a dinner party of that size and now?

All I kept is a single bin of “important glasses.”

I kept books I’ve read more than once because I’ll read them again and, after a lifetime of having my books confiscated as punishment, I have a hard time giving them all away. Kept books inscribed to me (unless I’ve purged that relationship; then I purged the book too) books I’ve edited for publication and books I’m mentioned in. Two boxes is all; I had 12 when I unpacked last year. That’s progress.

I kept some clothes, obviously. It feels like a lot of clothes but, after donating 15 30-gallon bags of nice, some new, all cleaned, some dry-cleaned, clothes earlier this week? The pile I set aside to keep isn’t much at all. Mostly PT gear and enough to stay warm and look polite in a mixed crowd.

I kept a bike, donated a bike. The one I kept is fairly new; fewer than 500 miles. The one I donated had two centuries and 1500 training miles on it. Why did I have two bikes? Stuff was in storage for a long time.

I kept a ceramic Santa Claus I remember helping my grandma paint when I was a pre-schooler. (sorry, Gram, I acquired that in the late 90s and it’s still mine). The only other “Christmas” thing I have is a collection of Starbucks ornaments from my sweet friend Dee Simpson. 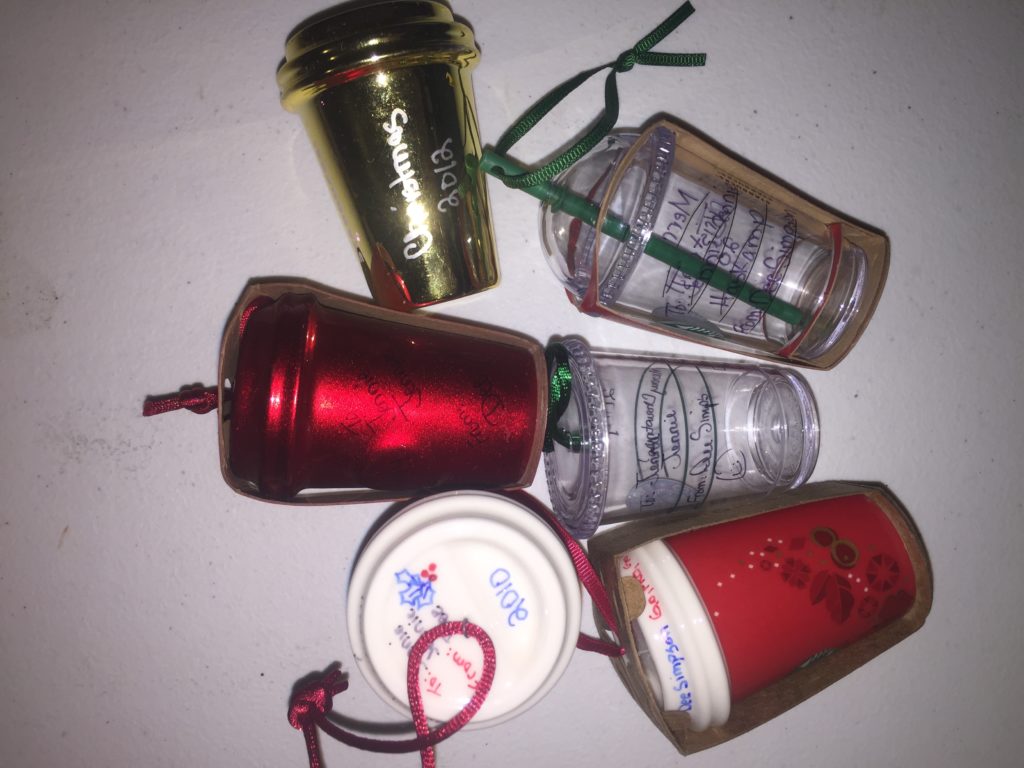 She’s been sending them for years and, as I unpacked and readied to repack these past weeks I realized those are the only ornaments I have with any sentimental value. I kept them. 💞

I kept my pumpkin collection. Velvet, glass, brass, wood and ceramic. Had to.

I kept my uniforms and stuff and my great granddad’s medals and badges.

I kept my Team Rubicon bag, packed, and my GO bag, too. And, lastly, I kept a box of old t-shirts I SWEAR I’m going to pay someone to turn into a quilt someday.

Everything else is on that truck or already gone thanks to a series of Facebook yard sales and creative Craig’s List posts over the course of a month.

If the topic arises in the future remind me I’ll never ever ever ever EVER have a Facebook yard sale again. Ever. I feel like I’ve been moving for a month and I hate haggling and negotiating prices. One lady asked if I’d come down on a price of a pair of shoes.

She’d already eaten two donuts and asked for a discount on literally everything she’d touched. I said “they’ve never been worn, there’s a $139 dollar tag on the box, lady. If I come any lower than $5 I’m just as likely to shove that shoe up your…”

I bought them on clearance, but still.

The following week two women came to look through the closets “instead of going for pedicures” and they were so fun and so polite I LITERALLY gave them bags of clothes for $20 each.

Unsure how I accumulated so much stuff in a decade post divorce/Marine Corps, but I’ll never do that again. Seriously. I returned from Baton Rouge 8 weeks ago with the idea I had too much stuff. It’s all just stuff.

My things were nice and looked great all out and displayed together but I’m not attached to any of it.

Hell, just this morning I opened a box that’s been in the attic since I moved here and was in storage for almost six years before that. I didn’t recognize half the stuff in it. Thanks, #TBI.

Speaking of attic. I still need to have to have a come to Jesus with the things I stored out of sight and mind. The attic holds:

•a bin of baby clothes I now know I’ll never use because I’m certain no one is going to rent space in my womb again, ever
•all my mom’s letters and poems and drawings and documents from a life in and out of prison and in and out of sobriety
•a Rubbermaid bin of letters from a 13 year relationship that included 11 years of marriage 6 years of war, several miscarriages, multiple funerals, plenty of good times, a lot of unhealthy words, hurts that’ve been forgiven and in some cases, forgotten and a tremendous amount of personal growth
•a wooden rocking horse Pop handmade before he died for a kid I’ll never have, sorry, Bud 💞

There’s at least a book in the attic waiting to be written, maybe two.

Before I leave tonight I’ll decide what to do with the rocking horse, I’ll mail the bin of clothes to my friend Julie in Germany who’s pregnant with #festbaby (HAHAHA!) and, even as I sit here, I know I’ll keep the bin of letters and the box of papers that tell the story of my mom’s life.

It’s been a long, interesting year in North Carolina. I’ve learned a lot about myself, let go of expired, unhealthy friendships, created new ones and finally came to terms with who I am as a veteran and a person. I have a sense of purpose again.

It’s been good to live alone, be single and listen to my own thoughts, but it’s been lonely, too.

Moving back to Northern Virginia close enough to meet up with friends for lunch, have a running partner and babysit from time to time is exciting. It’s not long term, but it’s part of an actual plan.

Having a five year plan for the first time in …almost 5 years… is exciting.

I’ve decided to make my mental and physical health, personal development and growth a priority for the first time in… well, a really long time.

I’m going to pack a uHaul trailer because, even with the giant purge, I have too much stuff for my Tacoma. #howwilliparkitinfrontofmycondo!?

One thought on “Moving day, unopened boxes and stuff”