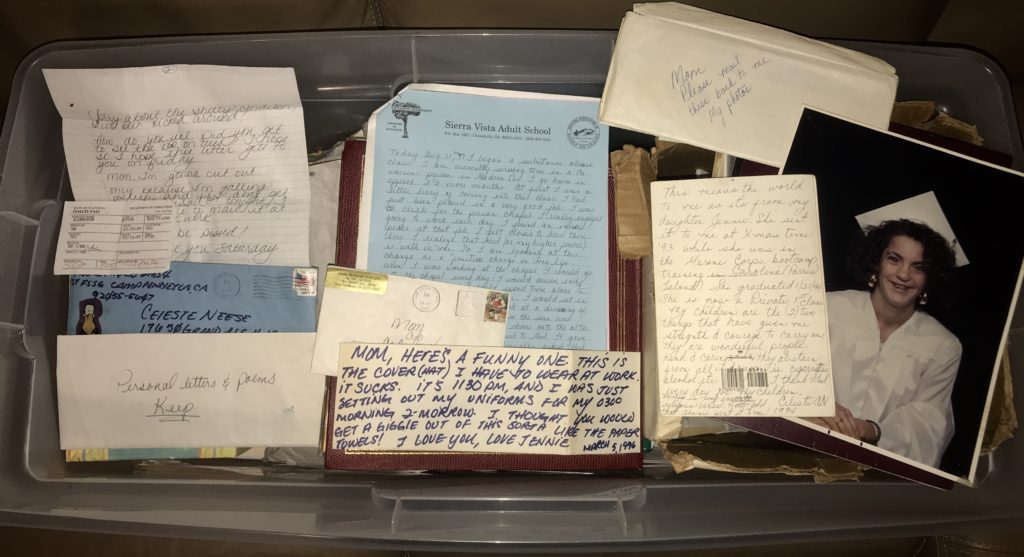 Unpacking my mom’s letters is something I’ve put off for a long time–literally and figuratively. Someday I’ll put all of this in a book. For now, I’ll drop it here to free space in my head and go home and face that bin. 64 minutes, 1248 words, 1 edit.

There’s a plastic bin of letters and journals and court documents I retrieved from her single-wide trailer after she died in 2010. It was crammed full of things. Stuff. It was clean but she was poor and didn’t let go of anything. My brother, 11 months my senior, begged me to handle the task of sorting out her home and things–he couldn’t bear it. We’d spent the last week together, camped out in mom’s hospital room. We knew it was coming. I obliged. I always oblige. I worship him.

I spent 20 minutes picking through that box one night after the trailer was dealt with and he and I each had the one or two twinkets we wanted. In 20 quick minutes I was so angry I broke things in my kitchen. I closed the box, left it on my kitchen table when I headed off to Afghanistan.  I was such a mess I didn’t even pack up my Oceanside condo–left the keys and a check for the movers with a friend–and left America.

I was so angry when I left. So very angry.
Six years later I reunited with my household goods again and I saw Mom’s bin. I hefted it into the attic and forgot about it. This seems callous, but with TBI, I actually full on forget things.

After a year in solitary in NC, as I prepared to move back to Northern Virginia, closer to my people, I dragged that bin out of the attic and sat in the hallway one night, in a half-packed townhome, digging through it. I cried until I passed out.

It’s in my basement now. When I get home tonight I’m going to bring it upstairs and sort through it. I have time and my roommate is out of town–if I end up hysterical, no one will know.

I can close my eyes and see her handwriting–familiar after decades of letters–and it still annoys me that I have the same scrawling font. Sometimes I’m a page into a letter or halfway through writing a card and I deliberately change the slant and size of my script, just so it’s not the same as hers.

I remember letters from her as far back as first grade. I’m sure they came before that, but I recall with freakish clarity the time my social worker came to school, pulled me out of Mrs. Bocker’s class and sat me down at a table in the cafeteria to explain why he’d taken a fat magic marker to line after line of the letters.  “Some of the things Celeste writes in her letters aren’t ok for you to read, Jennie.” To this day I don’t know why he brought the letters to school–and I don’t remember getting letters before that.

She wrote edge to edge on the page, front and back.  I was in my thirties before I realized it’s because paper was rationed and space was precious and she had so much to say.

My foster mom used to make me sit and read them at the kitchen table. If she was in a good mood, that was a non issue.  Just had to sat and read quietly. If she wasn’t, or there was some perceived offense in those pages, she always read them before I did,  I had to read them out loud, line by line, while she critiqued. I was then punished for the aforementioned perceived offenses.

There was a period in my adolescent years when I had court ordered overnight visits with my mom. They said this made the reunification process easier. Not sure about that, because it never happened, but it made letter reading sessions at the kitchen table harder, that’s for sure.

I was the only kid in my foster home who received mail and I had a love hate relationship with it–because of those kitchen table sessions. I got other mail too. My grandma’s stepmom,  Audrey, had a dog named Pepe who used to randomly send me cards and two-dollar bills.

I don’t remember if I wrote back. That guts me. I remember writing later, after I joined the Marines. I remember a shitty attitude, and writing so begrudgingly. I remember tucking her letters, unopened, into a box, for years.

I remember she always drew Ziggy or Garfield on the envelopes and pages when I was a kid. I remember the prisons and jails she wrote from: Chowchilla, Chino, LA County, Santa Ana, Riverside County.  She. Wrote. All. The. Time.

I understand the cost–the postage, the envelopes, the paper–but it’s not the cost that makes me sad today–it’s knowing how hard she fought to stay with us, in spite of her addiction and her sentences.  It guts me to try and process how hard it was for her, how flippant I was.

My brother asked me a few years ago to please stop sending him mail. Like mom, I’m a prolific writer. Birthday, holidays, random days–I used to send him mail all the time.  I asked why I had to stop and he pulled out two giant bins (his North Hollywood apartment is tiny and every spare space hold photography equipment) and said, “Because I can’t throw them away and I don’t have room for more.”

Turns out he’s a better historian than I am–he kept every letter from my mom, grandma and me. Every. Single. Letter.

The last piece of mail I sent him was postmarked Dubai, 2011. It was a GIANT Valentines Day Card. I bought it for my mom and then, in my hotel that night, I had a good cry when I realized I’d purchased a Valentine for a dead woman. I called him and told him I was sending it and I was sorry. If memory serves me, I’d already written it to mom. Kind of a dick move, in hindsight.

That bin in my basement, the one I’m headed home to unpack, holds more than her letters to me, or from me. There’s at least one journal–I’ve read a few pages. There’s court documents that verify some of the things my mom told us as we were growing up. There’s notes she took at a court ordered sobriety class. There’s letters to and from friends in prison, and from men and women who were her lovers at different stages in life. There’s poetry and polaroids. There’s photos of Eric and I with sad inscriptions on the back about missing her kids while my Grandma had unfettered access to us.

The pages in that bin hold a lifetime of truth and hurt and pain and love and regret.

Hers, mine and ours.

My mom was a heroin addict who spent most of my life incarcerated. When she was almost 17, I was born with heroin in my system. My brother was 11 months old at the time. For years I was told and believed my mom was an awful person who didn’t want us, didn’t love us, didn’t care. It wasn’t until I was much older that I fully understood addiction, started to question what kind of life she must’ve had to deliver a second kid at 16, high on heroin.

Her childhood included narcissism, an absent father and rape.

I can’t undo any of the past, and I’m slowly unpacking the baggage.

I think if I met her today, and she weren’t my mom, we’d be friends.

She was funny, smart and talented–and dead at 54.