A few months ago I geeked out at a dinner party and admitted I planned to start amassing LEGOs to build beehives. I wasn’t a LEGO kid but I’ve slowly become a fan of the colorful bricks–and I’m definitely a LEGO Aunt Jennie. 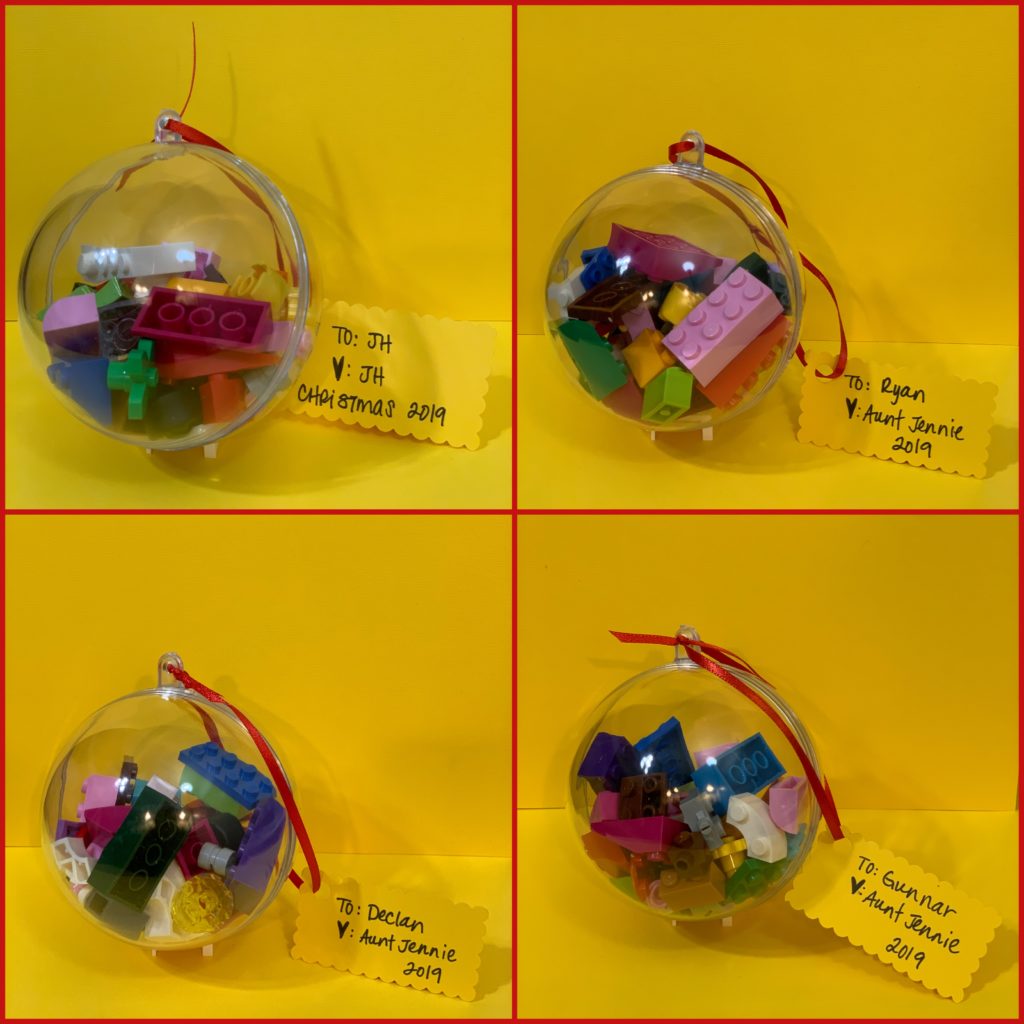 I started beekeeping last year and, in my infinite quest to learn more about the science and art of it, I discovered a video of a LEGO BEEHIVE. A beehive made from LEGOS! Suddenly, I saw those bricks in a whole different light. I love building with my nephews and seeing what they build but a LEGO hive?

I shared the video with the people at the after dinner fire [like ya do] and learned I wasn’t the biggest LEGO fan in the group. Marlise, an Army veteran I’d never met, revealed she’s been collecting LEGOs for most of her life and joked she had enough to build her coffin someday.

I remember thinking, “Damn. Damn. That’s a lot of damn LEGOs because once you move past a kid size coffin, EVERY COFFIN is giant when you contemplate making one out of LEGO bricks!.”

Her wife leaned over to say, “She’s not kidding. Everyone collects something–Roo collects LEGOs.” I asked to buy some from her and she waived me off with, “Helping save bees would be so cool.”

Party ended, but not before I talked way too much about bees and pollinators and flowers and my plans for the coming season.

The following morning I got a text from a number I didn’t recognize with a photo of a LEGO structure. 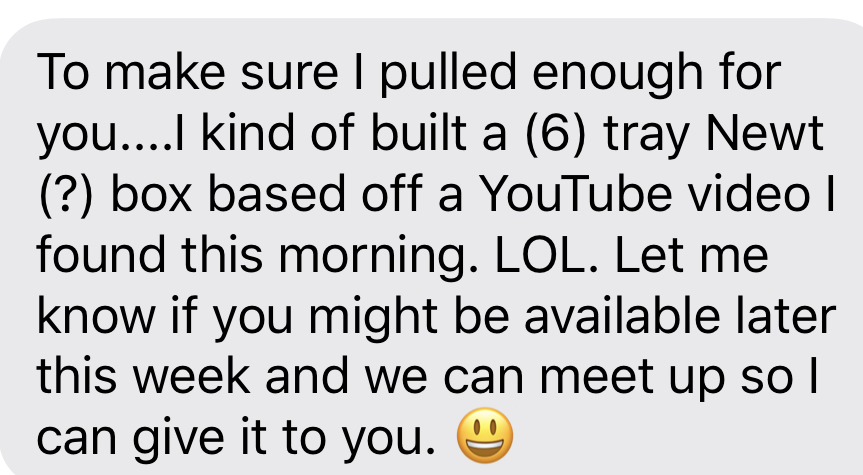 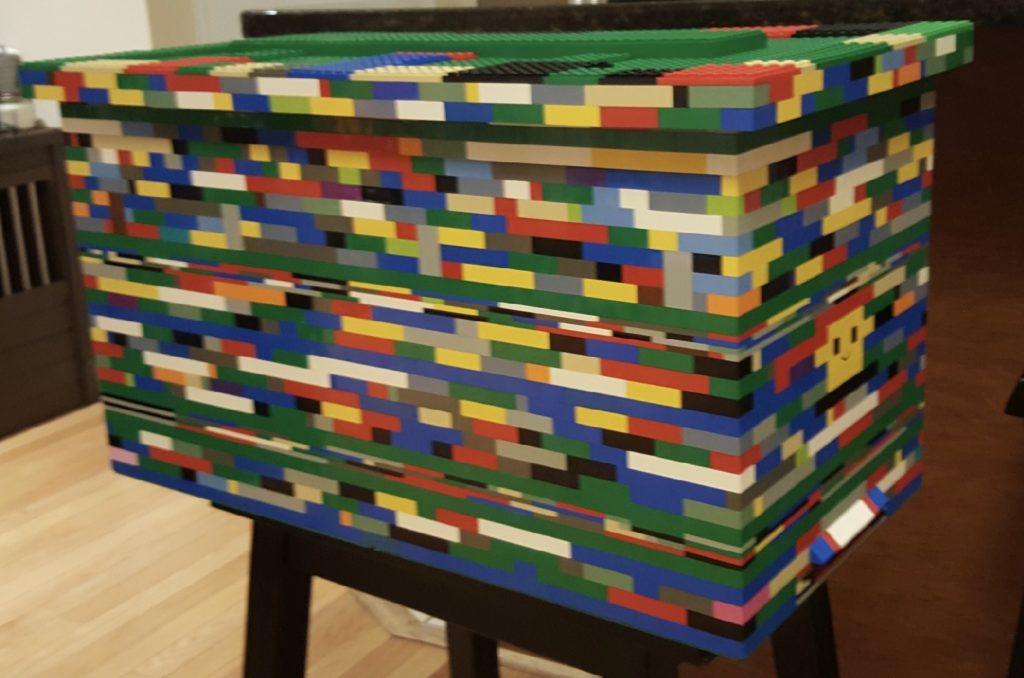 Wait.  I had to pause to remember her name [because TBI, not over imbibing, though I had assigned everyone at the dinner the night before a name based on what they were drinking] Wait!  Jack Daniels BUILT THIS BASED ON THE CONVERSATION WE HAD LAST NIGHT AND …

I called her. I went to check it out and she showed me the video she followed. I laughed when I realized why she called it a newt. The dude in the video she watched had a hell of an accent. She’d watched the whole video more than once, pausing to count the studs across the length and the bricks up the side.

I explained what the nuc is. Nucleus colonies are small honey bee colonies created from larger colonies. The term refers both to the smaller size box and the colony of honeybees within it. The name is derived from the fact that a nuc hive is centered on a queen, the nucleus of the honey bee colony… what?  Oh.  Sorry.

We talked about LEGOS and bees. Mostly bees. And her adorable dogs. I’m capable of droning on about pollinators [see what I did there?] and why it’s important to create habitat for them because without pollinators, we’ll all starve. 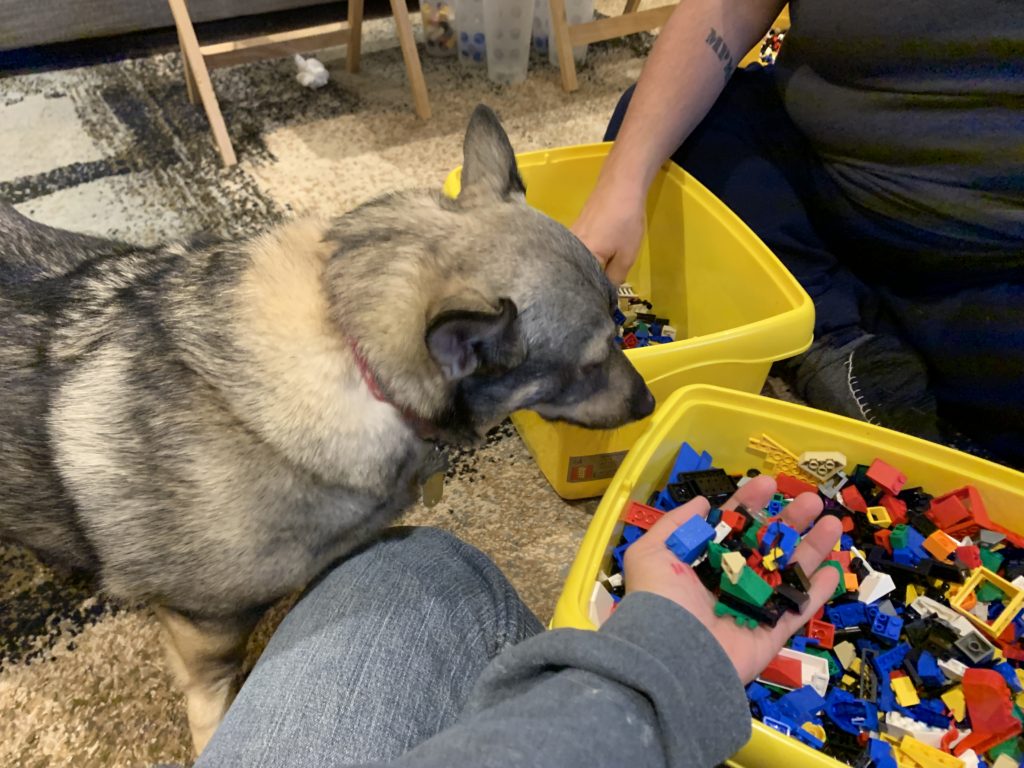 I explained that a hive is more than the box from the video and invited her to come to the farm and check out my hives. [phrasing]

To my surprise, she took me up on it and came out to see them with a measuring tape and notepad in hand. Turns out she drives past the farm on the way to and from work [before Covid-19] and she’d seen them but didn’t realize they were beehives. She measured, took a few pieces with her from my woodenware stash and went home. I dropped off my paint a few days later at her behest.  My two original hives were a rich bright purple tucked into a 200 foot long, 3 foot wide strip of paradise we call a pollinator patch.  Bees can only see some of the colors on the spectrum–did you know that? Curious? Click here for more. 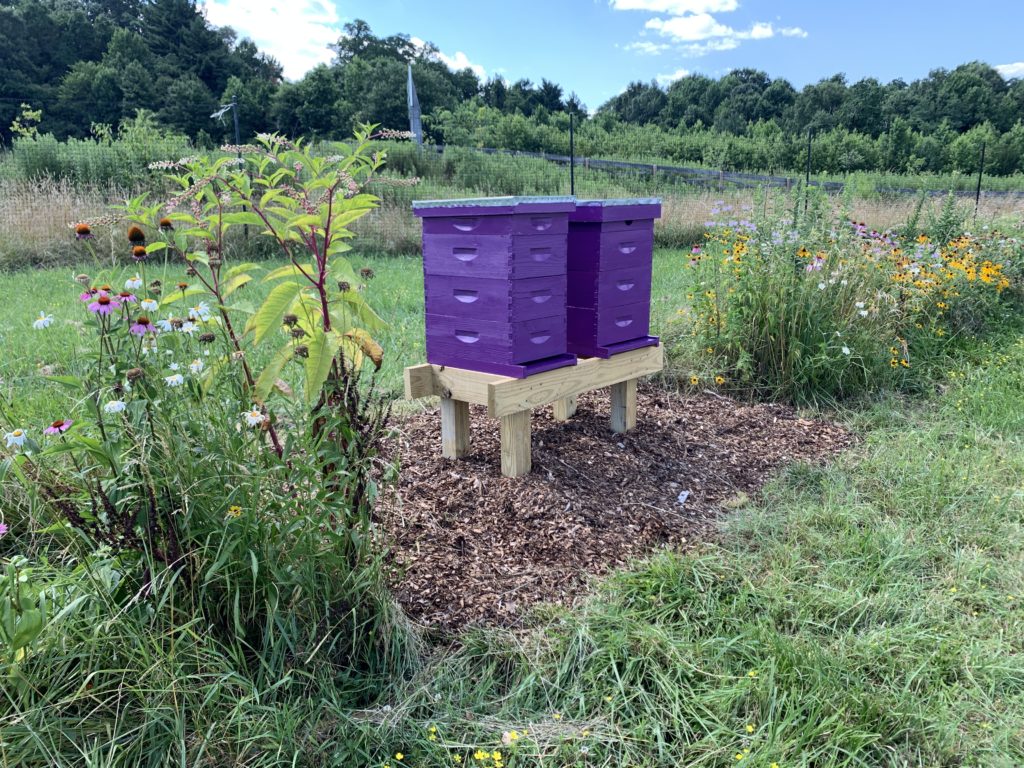 This turned into her winter project and she set after it like it was her job. It became a fun new topic with our mutual friends and I was excited I found someone as excited about the idea of building a LEGO beehive as I was.  Little did I know. I visited a few times to see the progress and add or sort bricks as instructed. [as allowed, really. Roo had this AMAZING system and she knew which bricks were in which bin, which were good for the build and which wouldn’t work well at all. I tried not to mess that up.]

Each time I was amazed by the progress–and the details of how she’d built a whole piece only to realize she’d been off by one stud. She tore the walls down and rebuilt more than once. Straight up engineering a LEGO hive, y’all.

I tweeted about the progress in February and a WashPo reporter sent me a message asking to interview me about adults using LEGOs to unwind and, when I finally saw the message I admitted I tweet about LEGOs often but it’s usually me playing with my nephews.  If she wanted to talk to Marlise, though…

At the end of February, she called and invited me over to start the gluing process.  I know, I know. I’ve seen the Lego Movie at least a dozen times–I KNOW glue and LEGO don’t go together.  I know, but I was so excited I drove right over and jumped in.

She’d built each element and now it was time to take them apart, upside down, and rebuild them brick by brick. With Kragle.

One brick at a time. 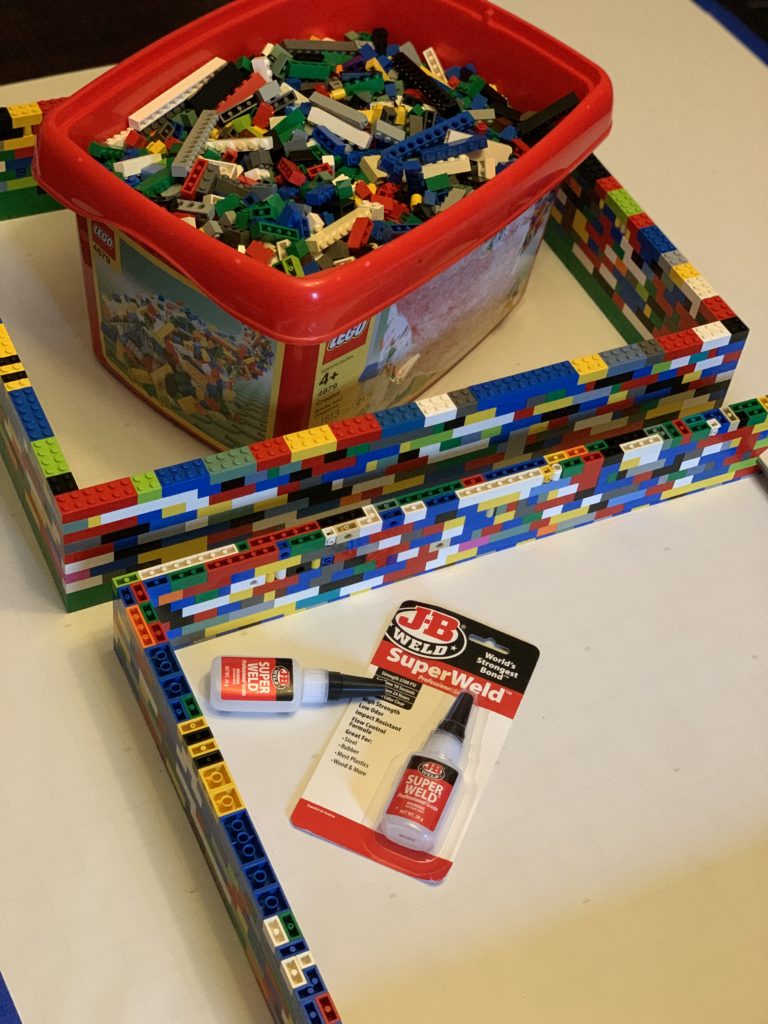 And so I became Lord Business.  Click here–you’ll see what I mean.  It was oddly satisfying, if only because I understood the necessity.*** 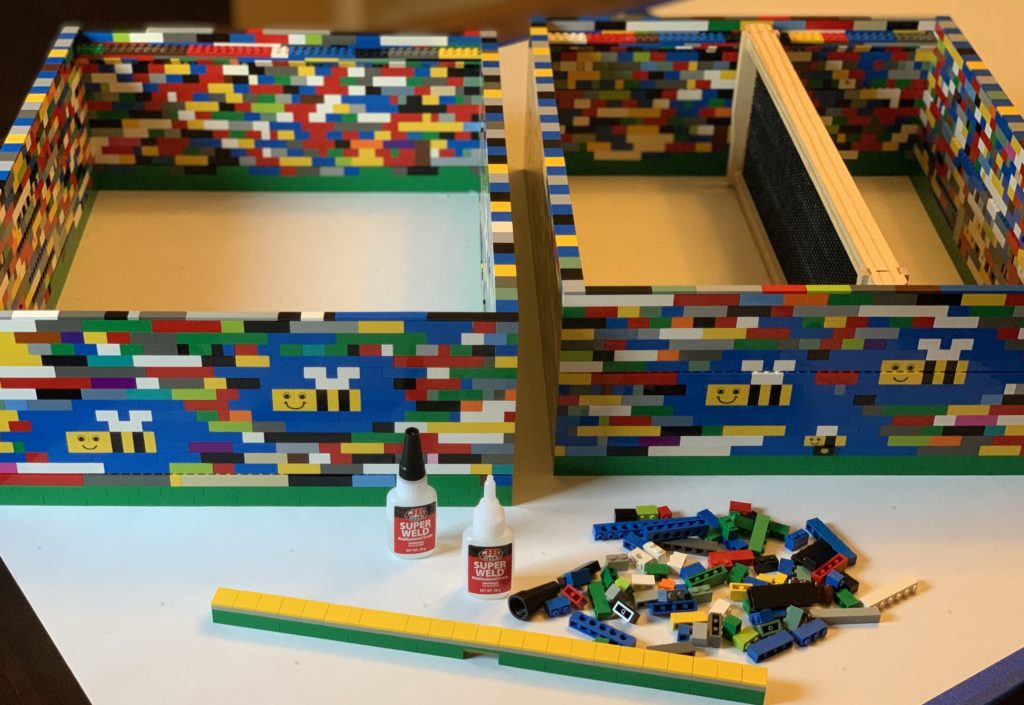 She snotted the top layer of each piece.  New to LEGO? SNOT means STUDS NOT ON TOP. She made the top layers smooth so the boxes and pieces would stack flush together. It won’t slip off, though.  Because propolis.

Basically, bees make their own Kragle. Curious?  Click here and read all about it.  Bees are insanely complex engineers. 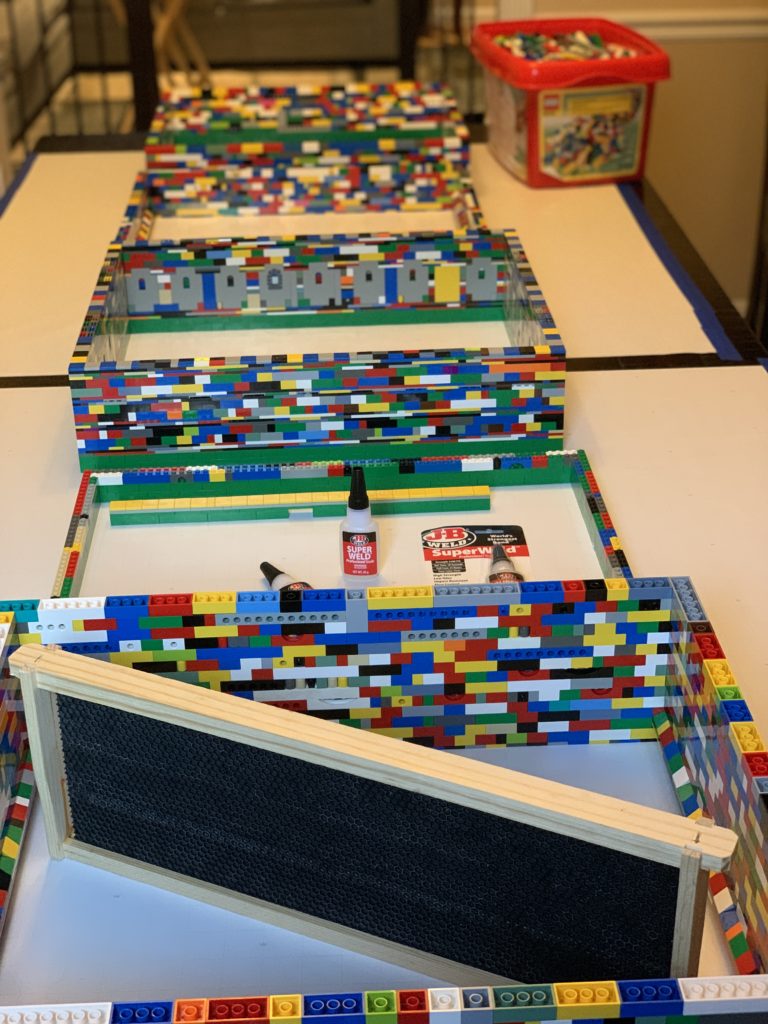 I won’t pretend I built this magnificent hive. I won’t even pretend to deserve it. I will tell you I love it. I love seeing an idea come to life. 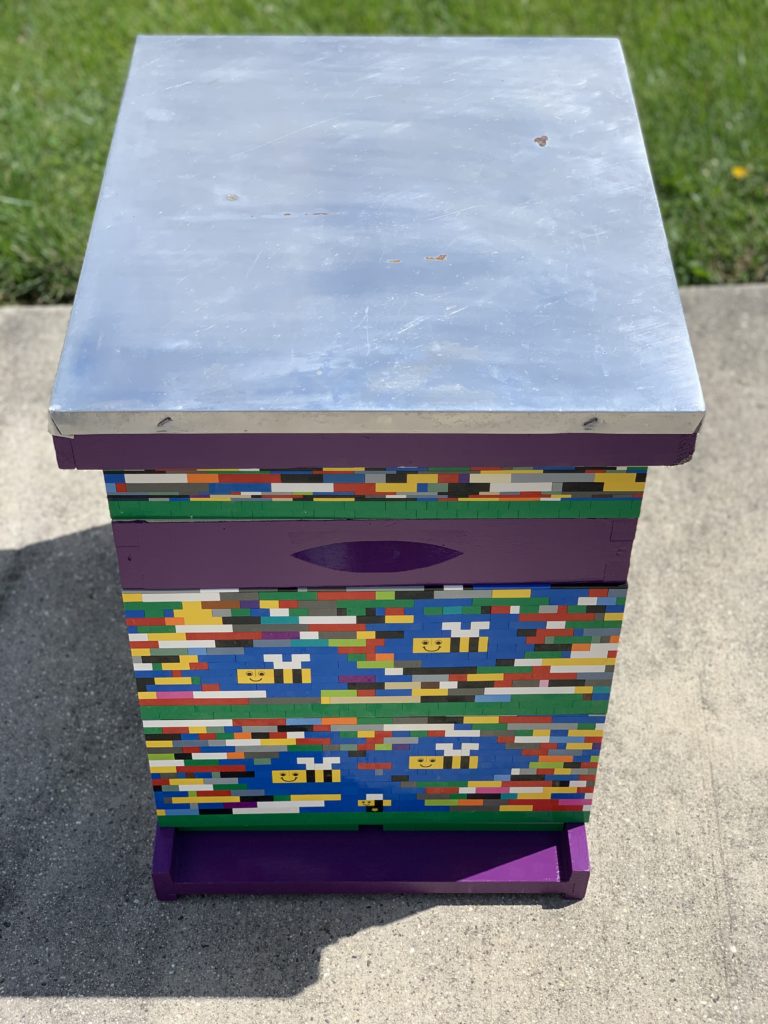 This is nothing short of a feat of engineering, patience and a dash of obsession.  Check out the schematics [that she didn’t use.  She just measured my woodenware and watched a few youtube videos.] She EYEBALLED THIS.

Imagine this but full of honey. Or brood. 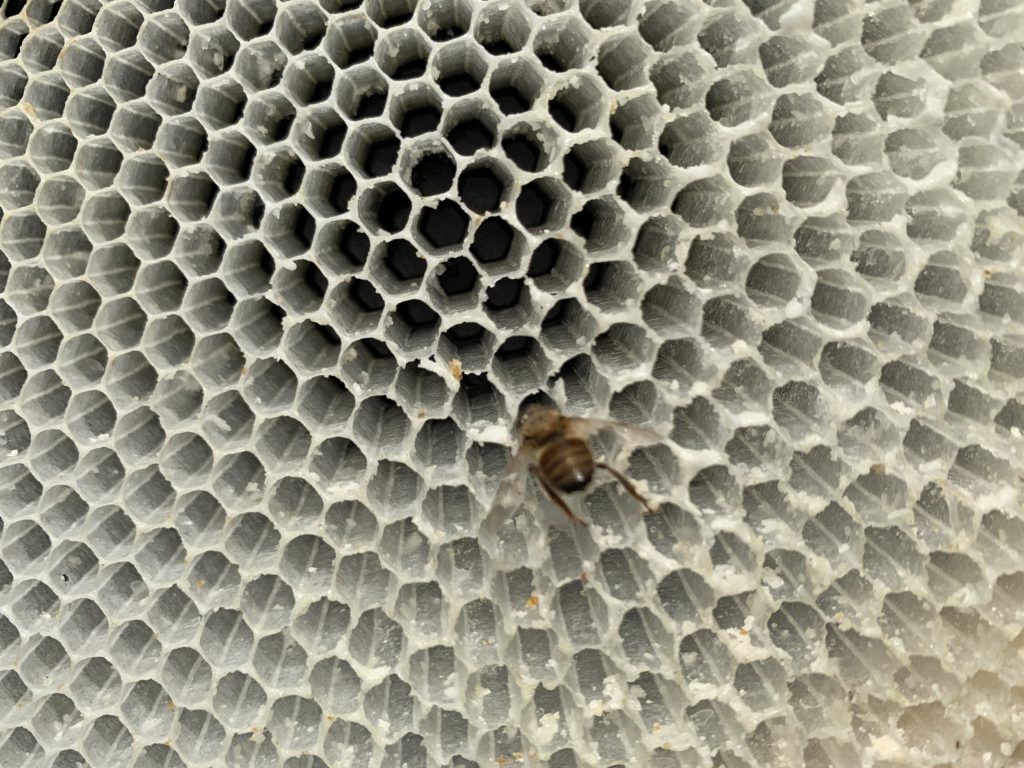 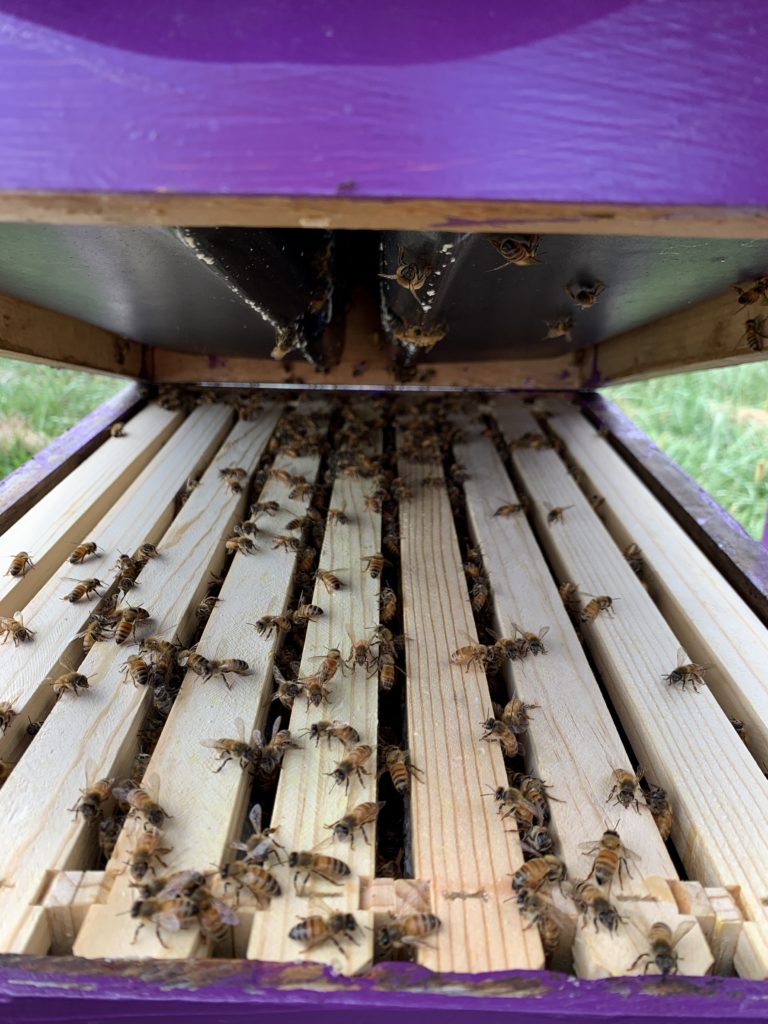 I love how it started–a conversation between strangers. I love that it opened the door to a new friendship. I love the idea of installing it on my space at the farm, too.

I started 2020 with plans to grow flowers for market and have a space for people to meander among the blooms and enjoy the pollinators. 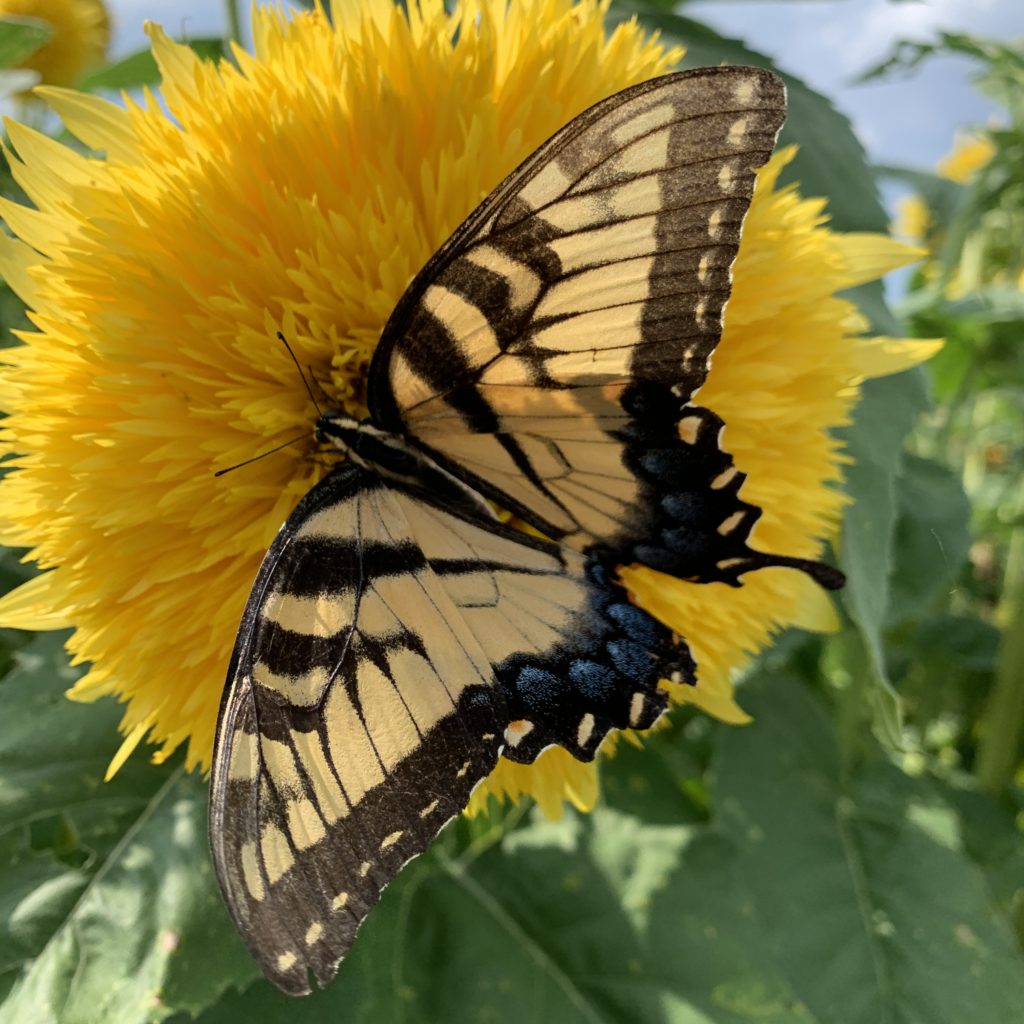 The original plan included a curved walking path, a loofah arbor, a LEGO adorned bench and THE hive. I want people to enjoy the space as much as I do.  To experience it. 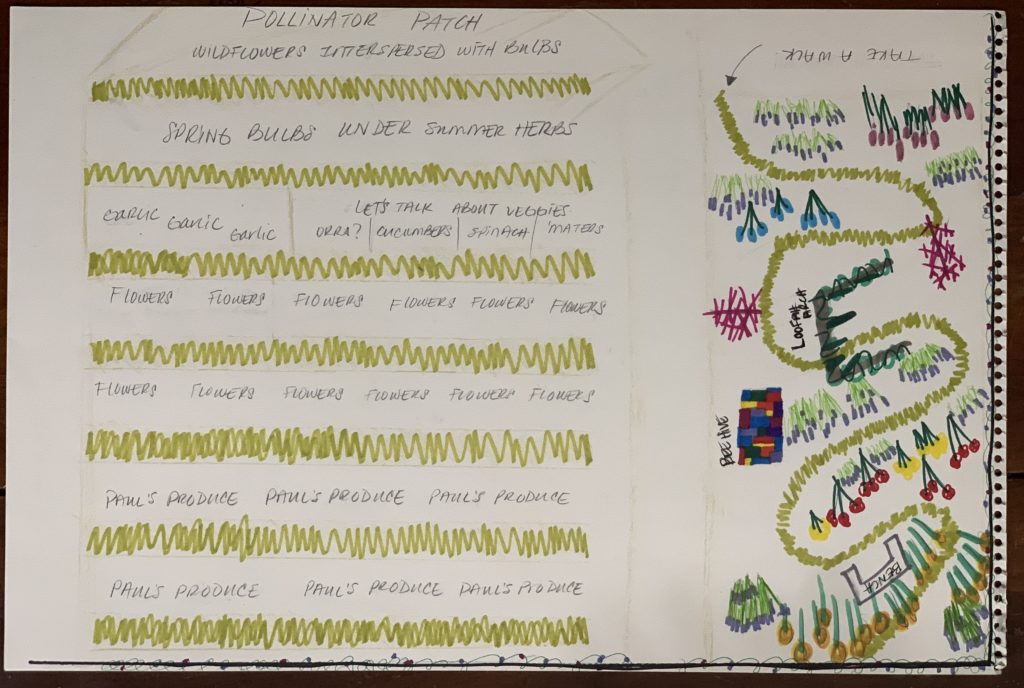 I blog to share, but also to remember.  My brain deletes a lot of things, thanks to a TBI.  Sometimes I walk back through my blog and laugh or cry or reflect after I read a blog I’d totally forgotten.  When I look back at 2020 and this pandemic and quarantine I want to remember this, too.  The amazing gift of time [and bricks] Marlise gave me.  The excitement that built with each update.

Covid-19 made me reevaluate what I planted–I’ll still have plenty of flowers but I also seeded a bunch of vegetables. Something tells me I’ll have plenty of opportunities to donate food as the season progresses. As I continue on this farming journey, one thing hasn’t changed–growing food and flowers is growing me. I’m committed to feeding the pollinators as much as feeding people and being fed.

***Post script:  It tortured my Middle nephew’s spirit when I told him I’d glued them together.  “But Aunt Jennie, that means they’ll never come apart.”

I know, buddy, but they need to be sturdy to support the weight of the honey. “Oh, Aunt Jennie…”

Today, while I had it staged in the driveway for these photos my neighbor walked up to chat [from 6 feet away] and the wind knocked it over. Not a brick out of place.  I took this photo without touching a single piece. 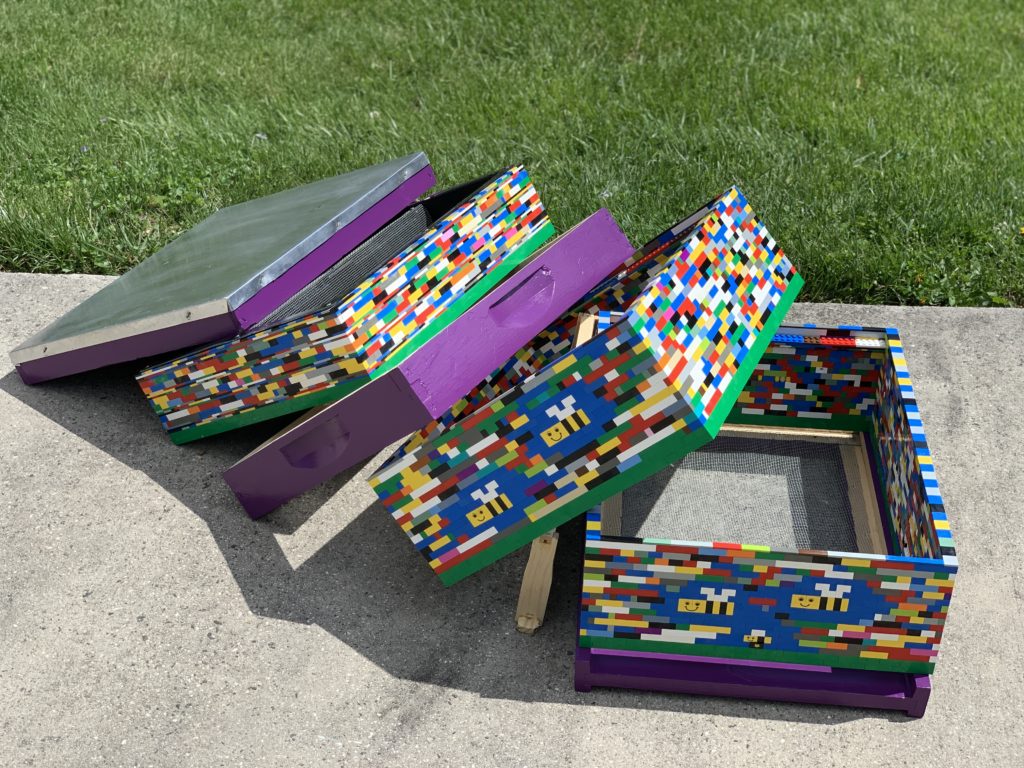