I didn’t know who he was or who he played for before he sat down and social media lost it’s collective mind, but here I am writing about him.

What he meant to do was bring more equality. Highlight a wrong that we as a people need to address. It is easy to criticize the act but, as a friend said this afternoon when I sent this to him for a sanity check, no decent human can criticize the intent. My wise, (and tall and smart and funny, in case he’s reading this), active duty Marine friend continued our conversation with:

I love that he lives in a country that has afforded him the salvage of a possibly wasted life. I love that he chose to do something. I love that he can choose to piss people off. I love that it has sparked controversy. His act. The act of a hashtag. The act of giving voice to opinion is all at once the means of change (read power, influence, etc). I love that veterans disagree. What I’m saddened by – truly- is that I believe we’re missing the forest for the tree and mislaying blame. His actions however good intentioned were wrongly aimed. The last thing we need to do is blame the country and the government. Never ends well.  It is the culture we must address.  **These were all texts. I corrected the typos. Thumbs.**

To those who’ve suggested he disrespected America, men killed in combat and all of us who served in the military? I can’t speak for all veterans, but I didn’t serve for a song.

I served initially for a better future. And three meals a day. And a skill set. And for the chance to afford college someday. And to break away from the tragic series of stereotypes I was born into. And to be     led to make better choices. When I reenlisted years later, I served for a Nation who’d just been attacked.  And for the freedoms and rights that Nation embodies and affords to all of her citizens.  Not for a song.

This comic says it better, though. Succinctly and in color. 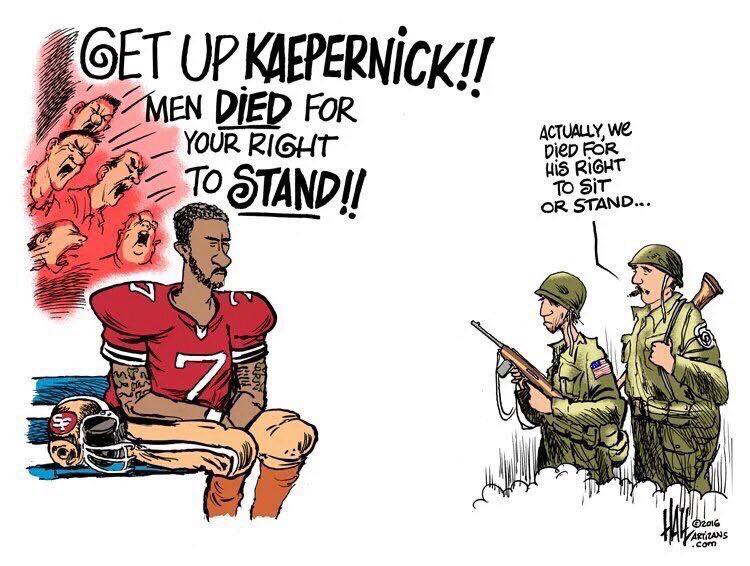 I posted that photo on Facebook this morning with a single line:

“Don’t use my service to demand his silence.” Sgt H

Among the early responses was one from a friend whose opinion I value; someone I enjoy exchanging ideas with even if we don’t always agree. Someone who is far more attuned to things in the sportsball community than I am:

It’s not so much what he did that bothers me as the way he went about it. So what, he sat. Big freaking woo. And now he’s relevant again for 5 minutes as people talk about him. Has his “message” changed anything? Nope. Has he himself done anything to change anything? Nope. Perhaps he could make some real change by putting his money where his mouth/actions are. He is in a real position to make a difference (perhaps donate his time to a football camp for at risk inner city kids) & instead he chose to sit on his talentless ass.

Whoah. Ok. Um, ok.  So, that cartoon struck a nerve. This was my response:

Sitting down is no less effective than smashing a hashtag at the end of a vitriol infused tweet and calling yourself “part of the solution.” The field is his platform.

Sitting down was his way of standing up and I commend him for it. The point of my post was to share my opinion about the lame idea he disrespected American veterans or America herself by sitting down.

The National Anthem is a song. It’s words. Words penned more than a century ago. Some of the words have been intentionally ignored because they’re disparaging to an an entire segment of the American population.

What blows my mind is the way white fans flipped their shit about it. Where are *those* fans when NFL players rape, kill, torture animals, abuse drugs, wreck cars and abuse women and children? They’re pissed because their fantasy football teams played poorly while their “main man” was suspended for a few games.

What are ANY of us doing to change oppression if we’re not, in the very least, raising our own voices against it?
Stripped of nothing but our beliefs, we’re all left with just our voice.
He used his.

Most people couldn’t spell his name before he sat through a song and yet, dude’s been actively engaged in charity and fundraising since he joined the NFL.

Good for him for sitting down.

Dude was so talented** he was drafted by the Cubs, chose football instead and raises awareness of pediatric heart disease and money for *disadvantaged* kids suffering from it because his adoptive parents lost two babies to heart disease before they adopted him from an unwed mother when he was 5 weeks old. *exhale*

Why don’t people talk about THAT?

Oh. Because he sat down.

**Not a football fan and not here to debate how he compares to other dudes who play the same positions on their sportsball teams; just saying he had enough talent to be drafted in more than one major sport, so I imagine he plays ok. And he has a right to express his opinions, just like we all have a right to express ours.

——I write some really long responses on Facebook sometimes.  Eh. ——-

I never thought I’d write a blog about anything NFL related. Ever. Or baseball, for that matter, but it bears mentioning the great  Jackie Robinson, himself a veteran of the U.S. Army, a commissioned officer no less, also took issue with standing for the National Anthem and saluting the flag as a result of racial inequalities and injustices he both witnessed and endured in his lifetime.

The Facebook conversation that prompted this post fell off the rails.  It seems I’m condescending, ha, and my subsequent responses resulted in me being unfriended. I was disappointed it ended that way but I wholly support the friend’s right to make that choice.
As I come back to this blog to finish, copy edit and hit publish, the last comment on the comic on my page is from my best friend’s dad, a veteran of U.S. Army’s Special Forces in Vietnam.

One thought on “Kaepernick”