Farm Friends Humor Mental Health Military
October 26, 2019October 26, 2019 Jennie 0 Comment
Growing and learning— that’s the stage of life I’m in. Second only to healing my brain and spirit is the significance I put on human connections and friendship. I drove to Winchester, VA today to grab a beer. Why did I drive two hours for beer. First let me explain why I grew hops.

Mind you—my neighbor planted them the year before in a “let’s see if this is a cash crop” and then let them wither. Last winter while we collaborated on building beds and planting in his backyard—recently registered with the USDA as a farm— he said he was ripping out the hops and the blackberries cause “neither paid for themselves “and he wasn’t willing to keep them if they needed anything beyond initial planting. Seriously.

I insisted the hops and the blackberries stay—my payment for the hours and hours of building beds, transplanting and seeding. They weren’t hurting anything and they’re there. Let me learn about them, tend them and see what comes of ‘em.

I don’t brew and didn’t plan to do anything with them—I grew them just to see if I could.

Turns out—I could. Hops need water and room to climb. I kept adding posts and running twine between them, training the newest bines up and into them. As the season progressed I randomly started sending photos to my friend Art. He’s a Navy vet I met in Houston while we volunteered to clean up after Hurricane Harvey. Since then we’ve kept in touch [often texting each other in response to something the other had tweeted] and kept promising to link up; reminisce about our time in Texas. Our random texts include my friend Jaime—our friend—who also served with us in Houston and lives in Maryland.

Why’d I send him photos of hops? Art owns Escutcheon Brewing in Winchester, VA. How’s that for a buried lede? 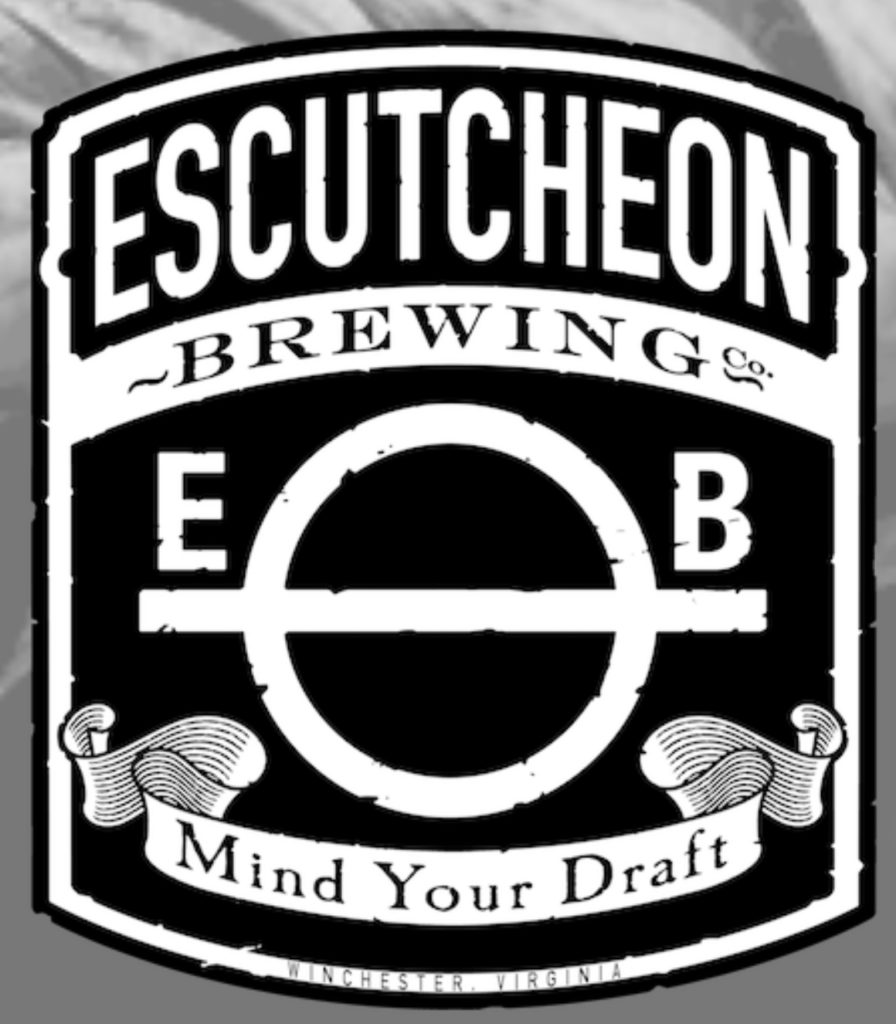 Was fun to share the hops crop with him. “Look dude—how cool!” “I grew these.” I mean—if anyone can appreciate hops, it’s a beer drinker who owns a brewery, right? For the record—growing HOPS is not the same as growing BEER but you’ll never convince me to stop saying “I GREW BEER.”
The bines [not a typo] climbed and the cones grew and suddenly I realized “I grew beer—I should do something about it.”
I asked Art if he wanted them.
“Sure, but they have to be fresh”—was the extent of the guidance.  Uh. Ok.
We settled on a date in August and one humid afternoon after a morning at the farm I drove home, cut all but one of the bines down and loaded them into the cab of my truck [along with tomatoes, garlic, a bucket of flowers and herbs form the farm] and drove to Winchester.
I love growing things—and I love LOVE sharing the things I grow. When I pulled into the bay at the brewery I didn’t know what to expect. I have this odd need for people to “like” the flowers etc I grow or at least appreciate them like I do. I suspect his brewer, John, didn’t know what to expect either.
I’m smiling as I write this. They were so geeked and appreciative of the hops we hauled out of my truck I was overwhelmed. Some of the bines were still wound around the posts I’d staked them on.
Hindsight that’s pretty JV but none of them complained. They helped me unload the truck and spread it on a tarp in the bay. 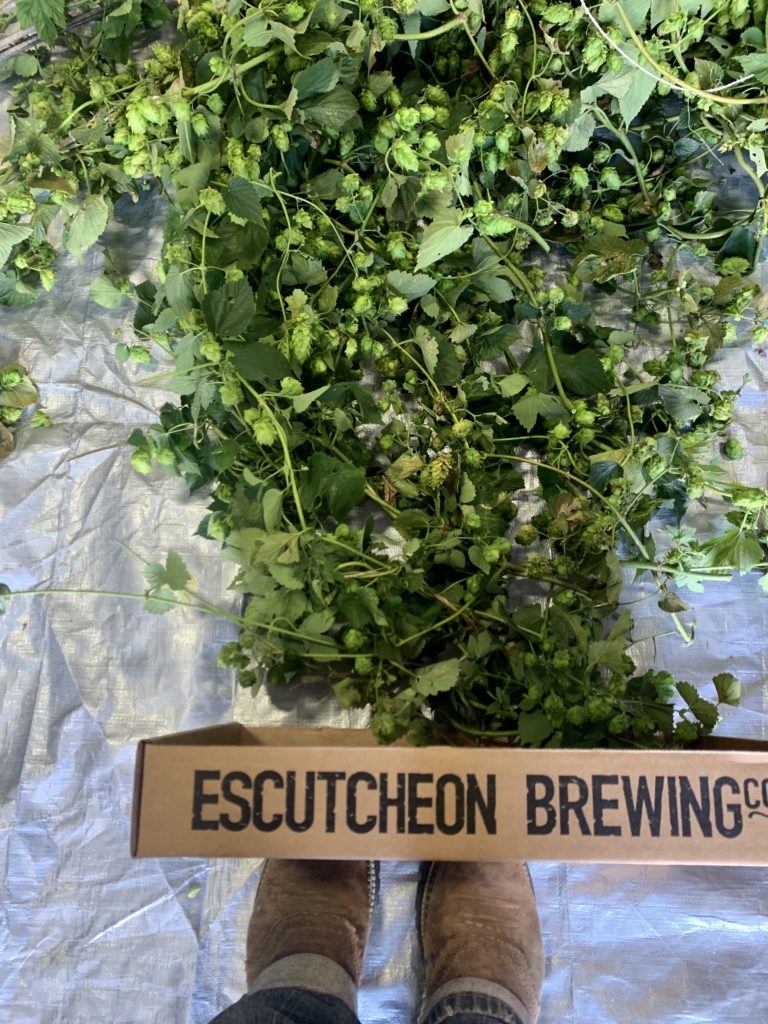 They gave me a quick tour, pulled pints for everyone and settled in to clip the cones. 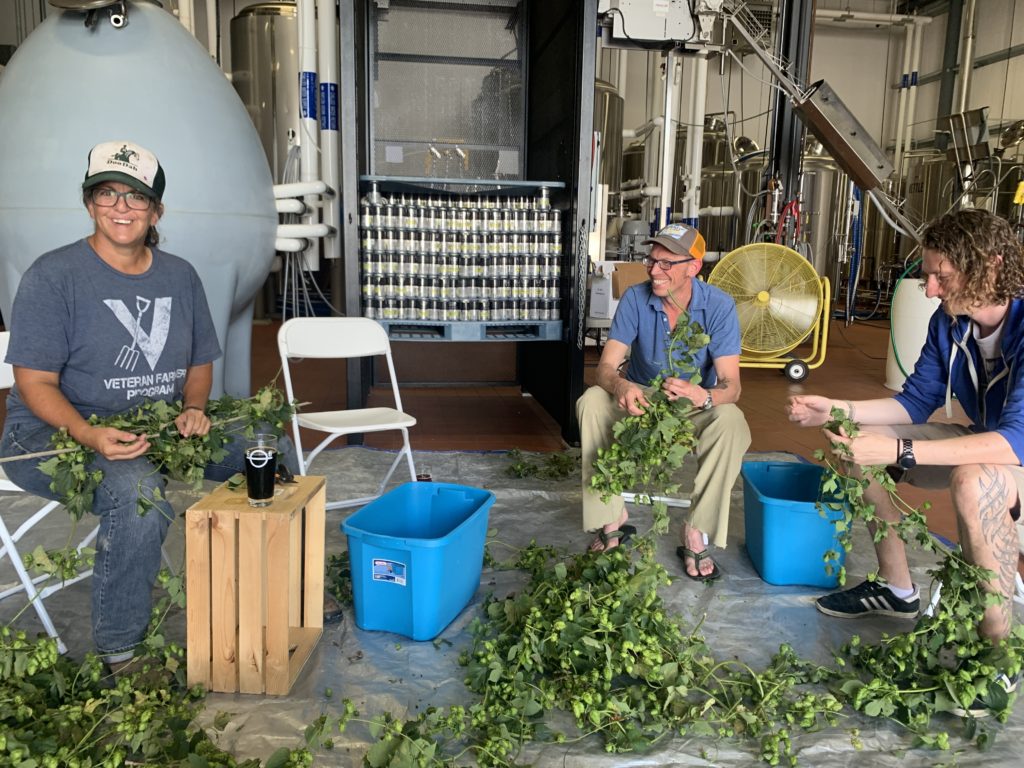 Much of the conversation went over my head but I did understand this was some of the best fresh hops they’d seen and they were as excited by them as I was. 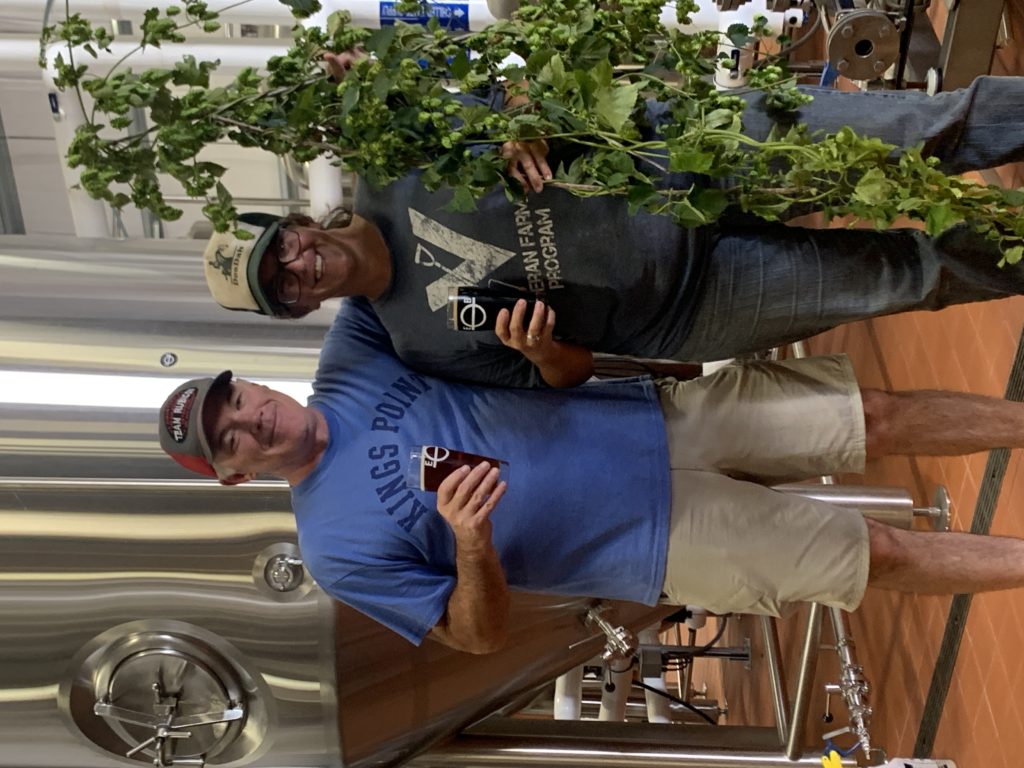 They coached/coaxed me into making a video—apparently all beer commercials have a clip of someone’s face buried in hops?

IMG_8349 I wasn’t sure if Art was hazing me—I’m still not—but the video makes me laugh.

Seems these were some “amazing cascade cones?” 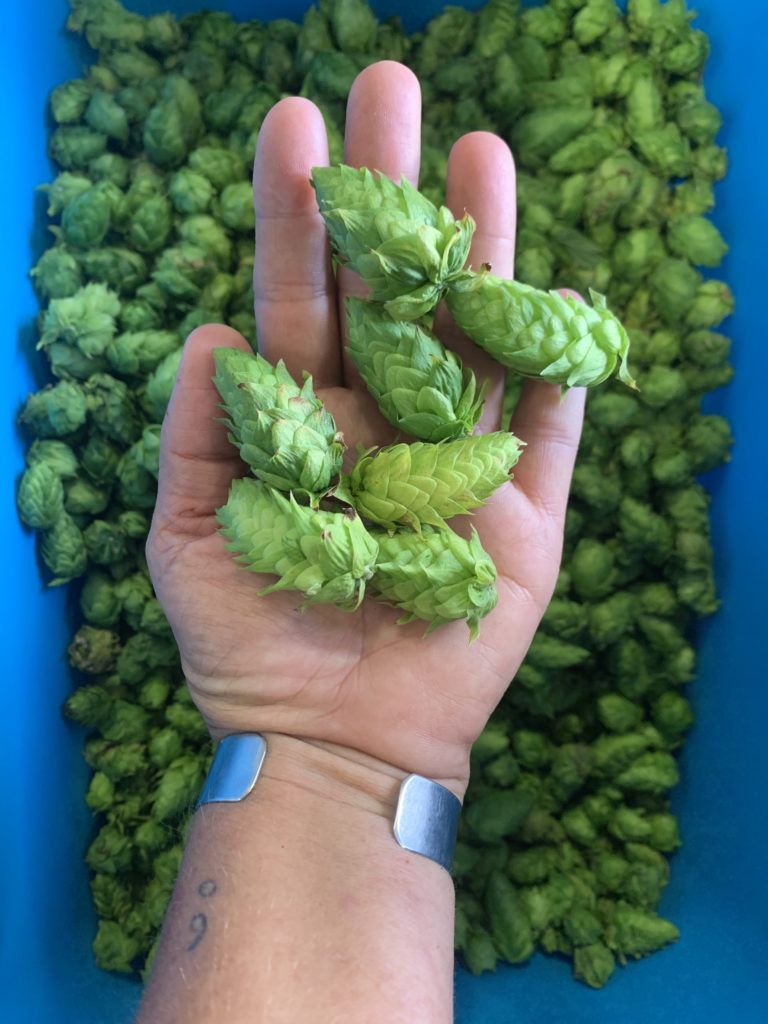 Our friend Jaime came out from Baltimore and joined us for the cutting, some photos and a few beers. Art’s wife and kids came down, we ordered pizza, laughed about different versions of the same story—I forced Art to accompany me on a late night Walmart run in a storm beleaguered Houston suburb in 2017 so I could cook breakfast for our volunteer group. 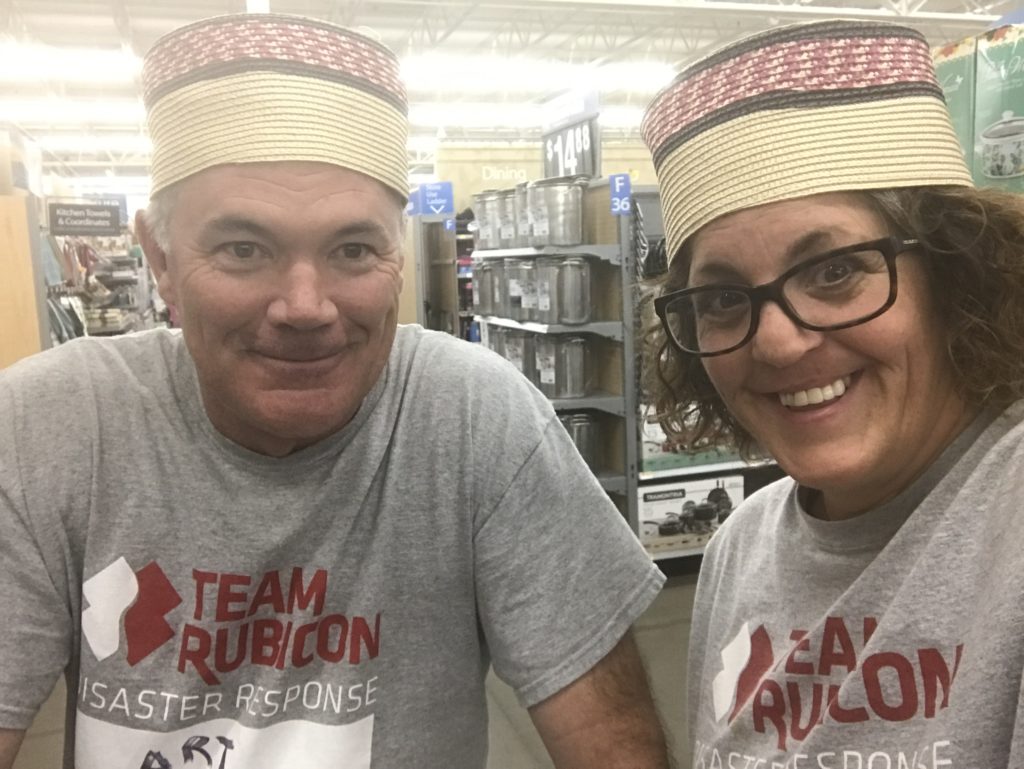 Turns out he’s really great at a lot of things but grocery shopping isn’t one of them. Whole list and I filled two carts before he found the butter.
The Houston to Virginia/Maryland circle was finally complete. I meet a lot of people and once in a while it’s someone who just “needs to stay.”
Jaime and Art are two of those people. Shared hardship, shared dark humor, shared sense of service and just judge mental enough to keep
me on my toes and laughing—they’re keepers.
A brewery owner, a beginning farmer and a cop. Navy, Marine Corps and Army. It’s a motley crew and it works. I don’t know how to describe it. It’s not everyday—but it’s on the days and in the moments that count. We go weeks without touching base and then a text or a tweet or a FB post resonates and we dig in a bit deeper. 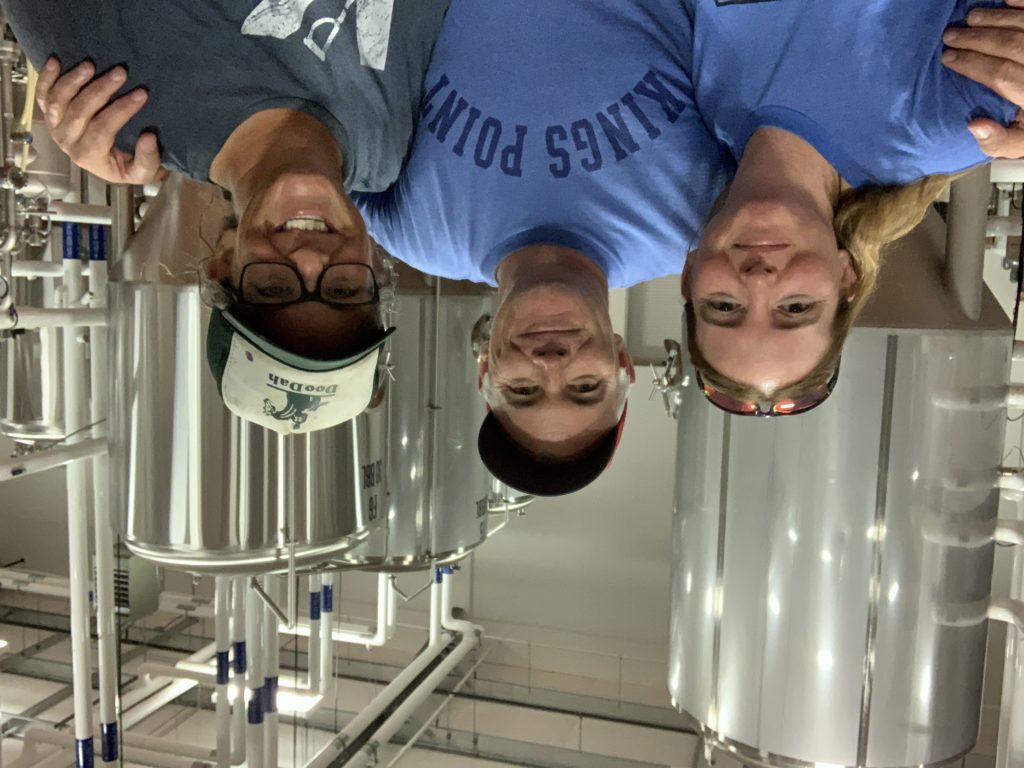 This week Art sent a text—“your beer is done.”
I laughed at first—unsure if he’d really used the hops. He assured me he had in a series of texts mocking me about what he named it—a conversation that perfectly encapsulates our friendship. Texts like these or “I will kick all of their asses—let me know when you have another VA appointment” because she read a tweet about me being harassed and accosted at the VA. He would
kick their asses and go to my appointments with me if I asked—so would Jaime. 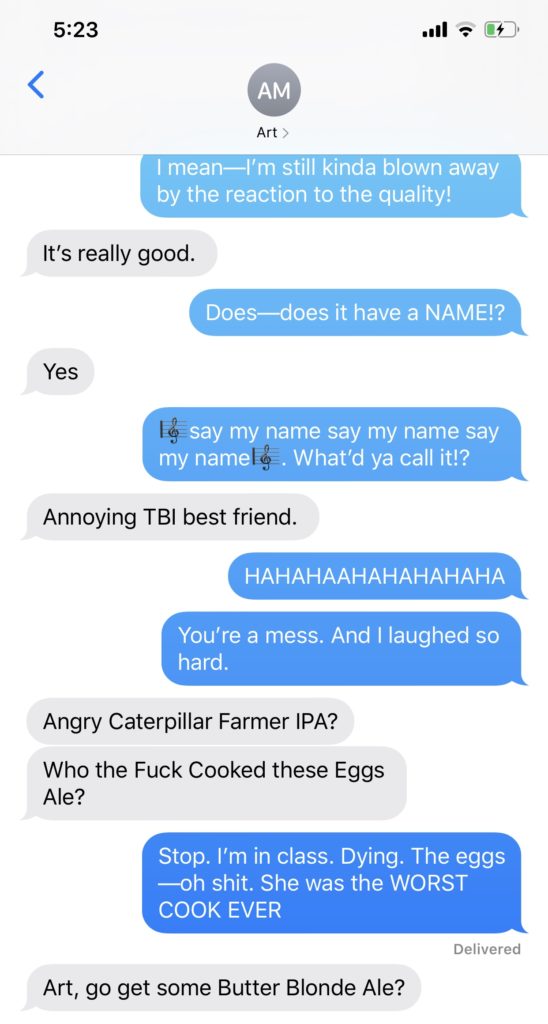 I made plans to head to Winchester Saturday after work—Jaime couldnt come. Work and the World Series kept her in DC.
And so.
I hit the brewery today, took custody of “my” beer. 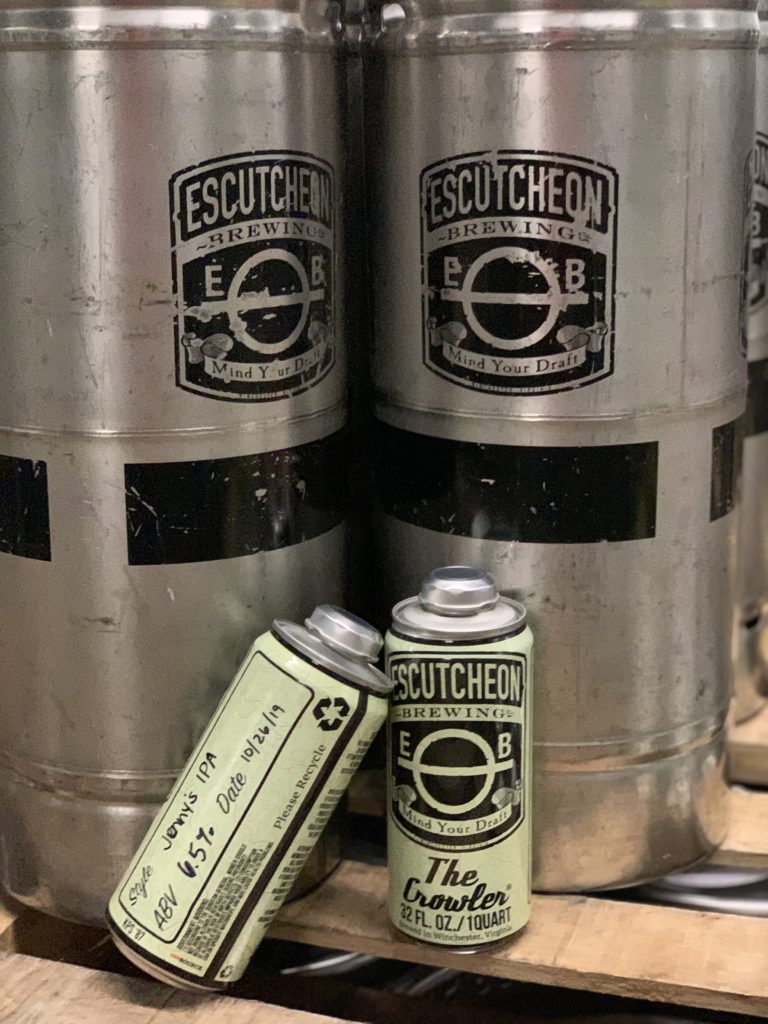 I walked in with a bag of meat products from a local farm I’d just visited for work and Art said loudly “you brought BEETS? You’re going to trade BEETS FOR BEER WHAT IS WRONG WITH YOU?” The joke here is he reads all of my farming tweets even if he doesn’t respond. And he hates beets. “Meat, asshole. I brought MEAT.”  I had a pint, caught up on the last two months, laughed with Maggie and Art, coerced him to pose for a photo, cracked up as Maggie scolded him for “doing it wrong” and headed home. Her, “No Art. No” was met with, “I don’t know what I’m supposed to do with my face” and I couldn’t stop laughing. 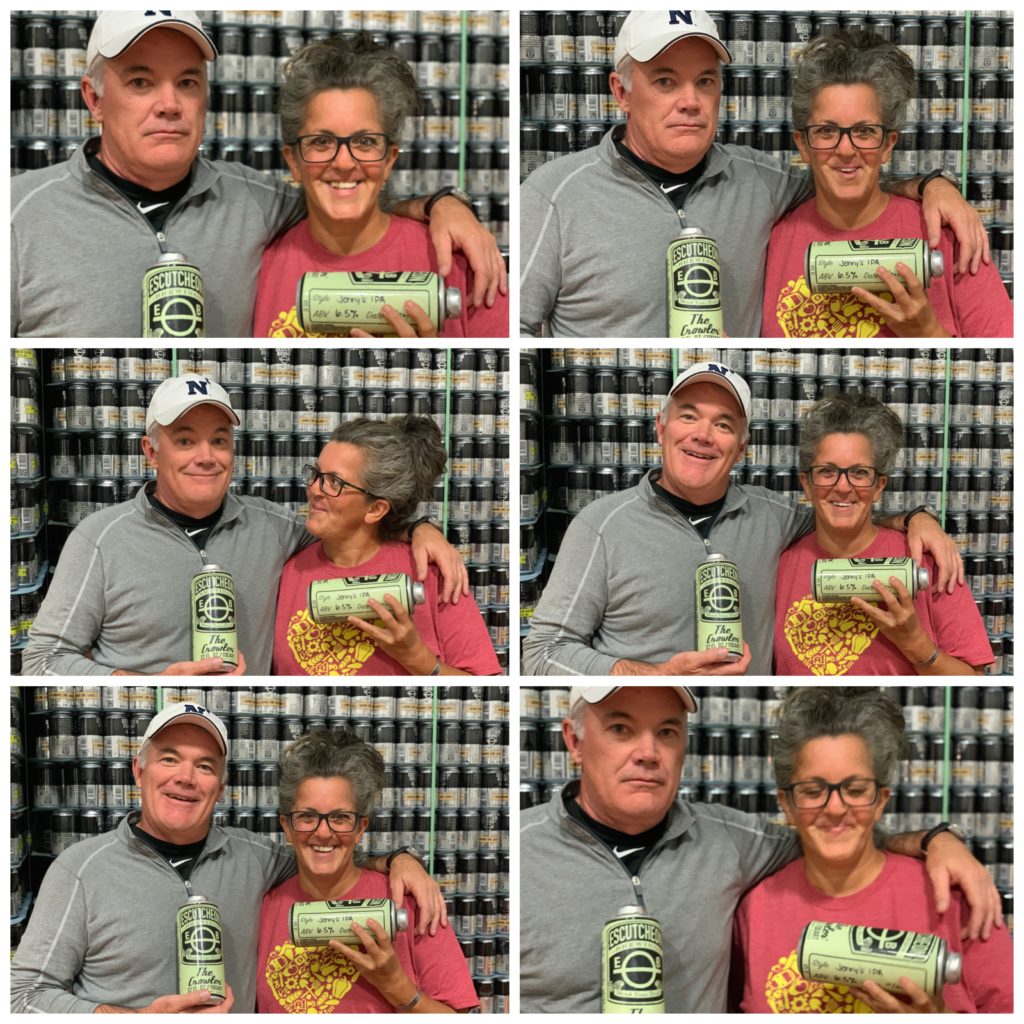 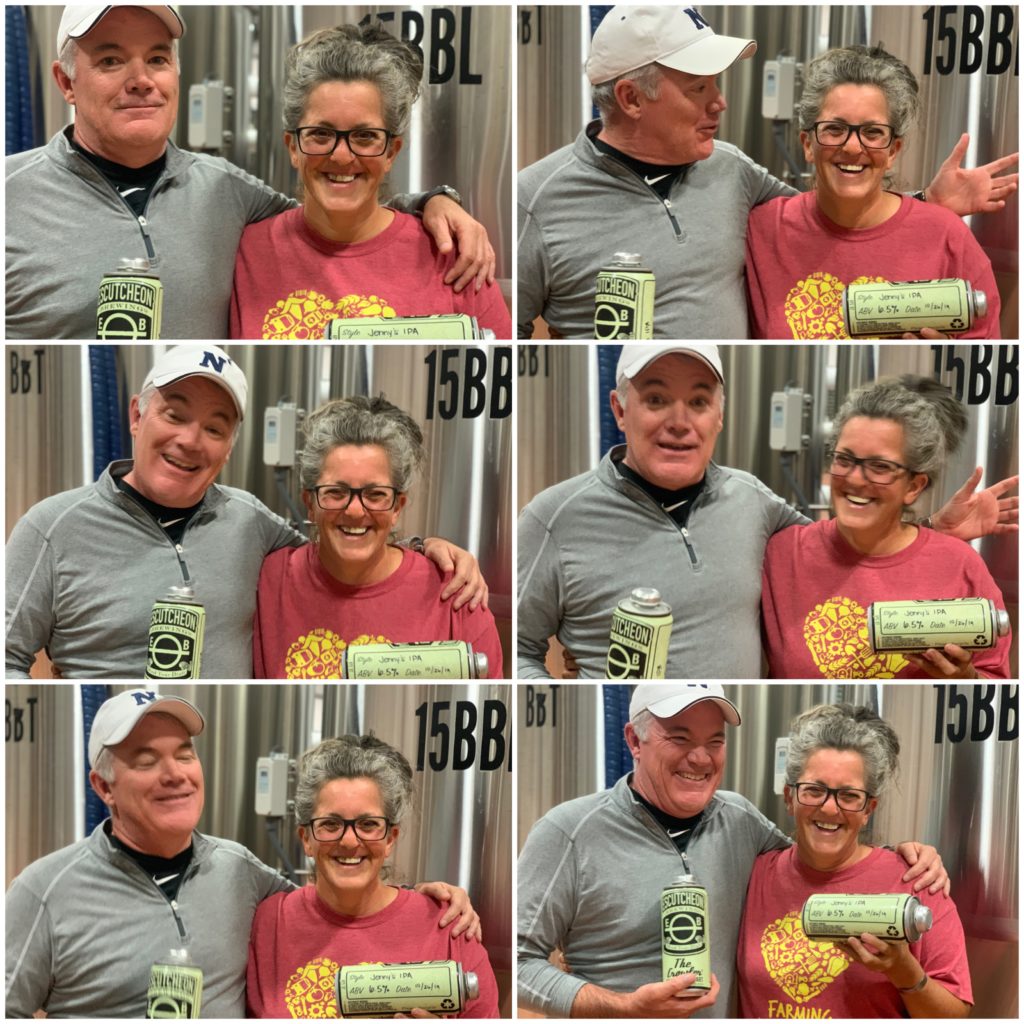 That’s not the point. The point is my friends support and appreciate this crazy journey I’m on —this healing through growing— and Art showed that yet again by throwing my hops into one of his kettles.
Friendship is simple. It’s laughing and checking in and staying in touch—and sometimes friendship is “Jenny’s IPA.”