As I write this it’s 0700 local time and  I can hear my neighbor in the next room waking up.  I’ll spare you the details, at least in this post, but the walls are thin here at the ‘Ville. (note to self: buy earplugs)

Thought I’d share the second day of the trip with you.  As previously mentioned, Dubai (what little I was exposed to) was quite opulent.

Sahar and I made our way from the hotel back to the airport with all of our luggage in tow.

I learned (to my dismay) we’d be flying out of the ‘third world’ terminal and the Starbucks I’d hoped to visit was in the terminal we’d flown into the night before.  Not whining, mind you, simply explaining the lack of corporate endorsement in coming photos.

In addition to being clean, it was calm.  There was no PA system screaming at people.  There were no final final final seriously, really, this is the FINAL boarding call announcements. In fact, I didn’t hear a single announcement  on either visit to the Dubai airport.  There were monitors everywhere, though, and a scrolling message said “We eliminate announcements to enhance your airport experience; please review the screens for flight information.”

There was a lot of shopping, though.  Gold, cars, designer clothes and more alcohol than I’ve ever seen in one place.

Lets see if the video messes with your vertigo like it does mine.  I’ll work on my steady-cam-hand but thought you’d get a better feel for the stores.  VIDEO WAS A NO GO.  I’ll look into that.

One of the things that amused me was the yellow and black stick people type caution signs they used throughout the airport.  Some included English and Arabic, some only included Arabic and pictures.

This one caught my attention because with the exception of a blonde toddler in the customs line the night I arrived, I didn’t hear ANY kids at the airport. I saw them, everywhere.  They talked and engaged with their families but there was no screaming, no fits… It had a bit of a Stepford feel, now that I think about it. 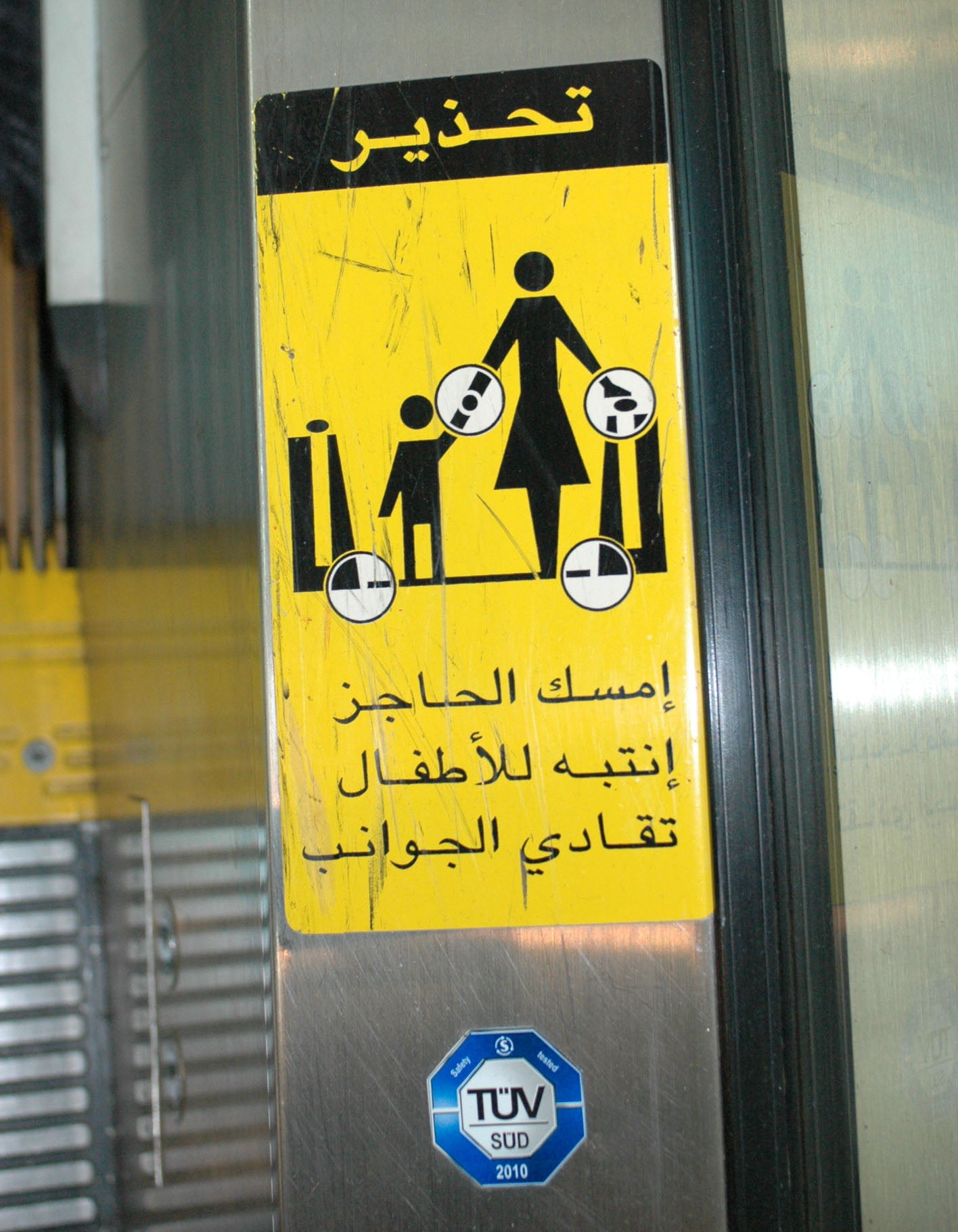 It was posted on the moving sidewalk.  Which, IMHO (in my honest opinion, Piper) was itself worthy of a photo.

For the record, the neighbor’s morning routine lasted 27 minutes. (urgh!) I hope I NEVER have to make eye contact with him.

Before I forget, did any of you get the memo about the whole Swatch watch comeback?  Meh… I missed it.  Dubai, however, did not.

This advertisement screamed “Duartes have a reason to come to the Middle East” but I’m sure that’s not going to happen so Gabe, enjoy the picture.

Once we finally stopped walking in circles like tourists (I needed post cards and a magnet for Gram) we boarded a bus. It was so crowded some people were lined up as though they’d been screamed at by drill instructors. (something about bellybuttons) and in a quick minuted we were disembarking to board the Kam Air flight (yes, Kam, I grabbed you a souvenir)  and head to Kabul.  It wasn’t the biggest plane I’d ever flown on.

No one else seemed wary, though, so I lined up and boarded with everyone else.  Funny, an American (man or woman) stands out on a flight like this.

The service was great;  a full meal on a three hour flight and two rounds of beverages is something you don’t see on a domestic flight anymore.  I could neither pronounce nor identify the ‘chicken’ so I skipped the actual meal but the salad was good and the mango nectar was awesome… despite the turbulence.

The rest of the images are actually videos and they won’t work right now so… oh. I didn’t take any photos at the Kabul airport because the angry man with the funny hat and a weapon asked me not to.  Funny what you understand if it’s in a foreign language and delivered with increasingly concentric volume and spastic hand gestures.

This guy didn’t mind having his photo taken, though.  I posed with him at the Dubai airport as we waited in line for our passports to be verified. For the fifth time. 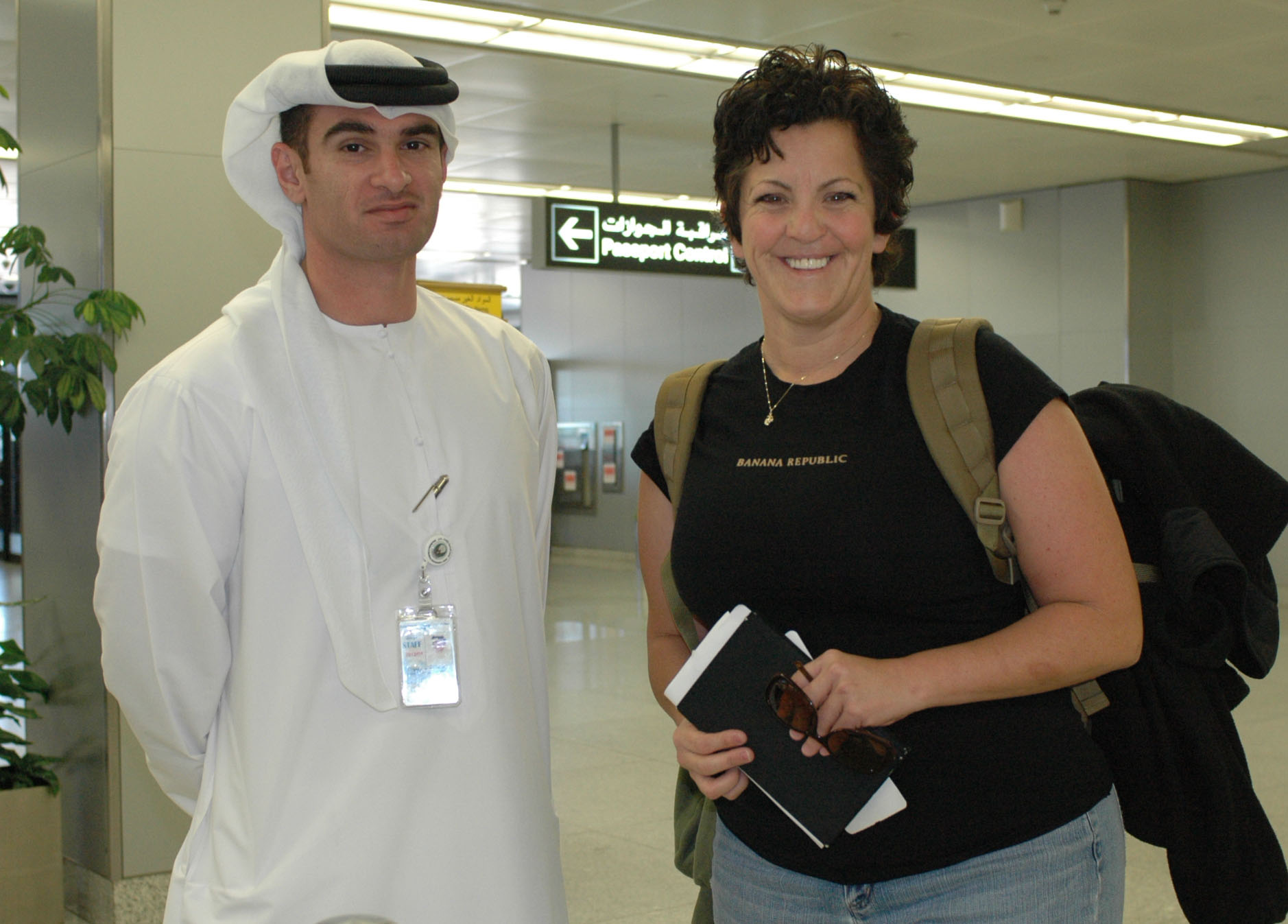 He looks annoyed but he actually paused to straighten out his keffiyeh before he agreed to the photo.

And that, my friends, brings you up to date on my trip TO Afghanistan.  Happy New Year!

3 thoughts on “Dubai to Kabul… quite an adventure.”