Cleaning up my desktop, found a blog I wrote and never posted.  I’ve been home from Houston for a couple of months but this memory made me smile again, so I’m posting.

Change your socks—we say it to remind people self-care is as important as caring for others. I’m used to hearing it—and saying it, but this deployment with Team Rubicon, I needed it.

After a few weeks in Texas telling the stories of Greyshirts and homeowners in the aftermath of Hurricane Harvey, I jumped at the chance to help a friend help a friend. I didn’t realize, until it was done, that I’d spent the day, essentially, changing my own socks.

Steve Reid is a Greyshirt and retired NYPD detective who spent time in South Texas on our swift water rescue teams and mucking out homes on a strike team in Magnolia. While he was here he connected with a police officer in Port Arthur, Texas, whose home was completely flooded.

How Steve connected with her is still unclear. A friend of a friend—the guy knows just about everyone—I’m sure, or a group on Facebook.  Matters not.

He’s a good dude—if he needed me to do something, I’d do it.

He texted me early one morning after he’d returned to New York and asked if he could PayPal me $100 and send me to Walmart to buy a birthday present for Officer Kandice’s son, Rylen, who turned four that day. 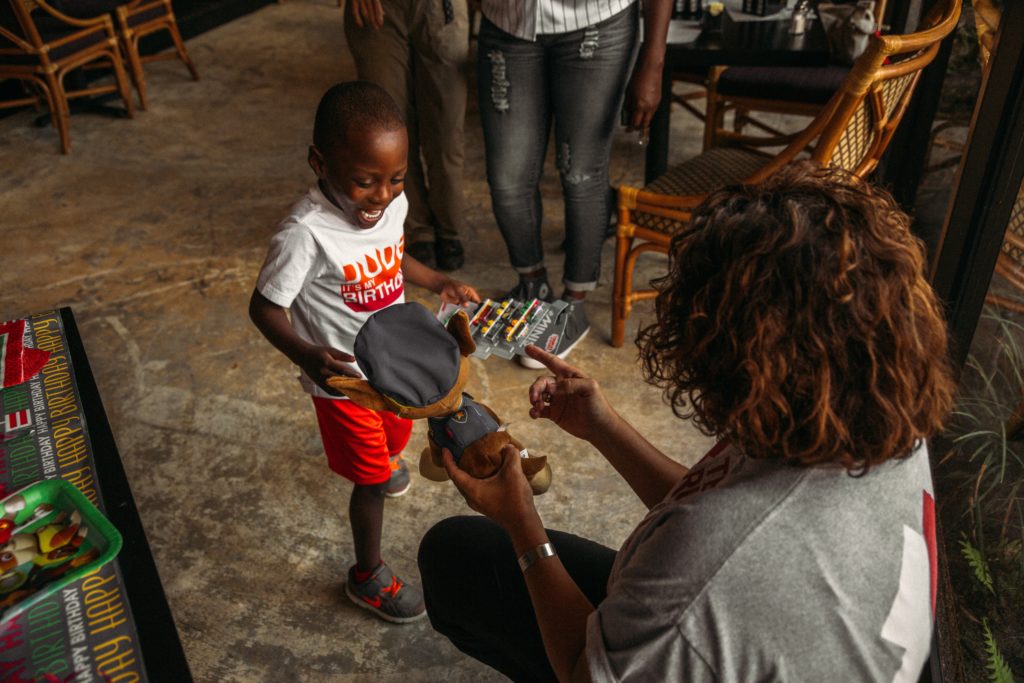 I had the name of the hotel, I knew what toys he liked and away I went.

I gave Jeremy Hinen, the Team Rubicon photographer working with me, the chance to stay behind since, “running to Walmart and throwing a birthday party in a hotel lobby” wasn’t quite in his job description.  He insisted on coming.  Our Safety Officer, Pat Gustafson, a no nonsense retired Army colonel with a pink bedazzled hard hat who hadn’t had a day off in more than a week, asked if she could come too.

And so we trekked to Walmart. I spent more than I should have—except who is to say how much I should have spent, really? In the sweltering Houston humidity, we gift-wrapped on the tailgate of a truck in the Walmart parking lot. A Thomas and Friends mini train set—complete with every package of minis they had in stock, because, as my best friends will tell you, moderation and kids toys is a constant struggle for me.  Aunt Jennie knew enough to buy a cool travel bag to store and carry the three dozen or so mini trains, too. Shout out to Declan and Gunnar. 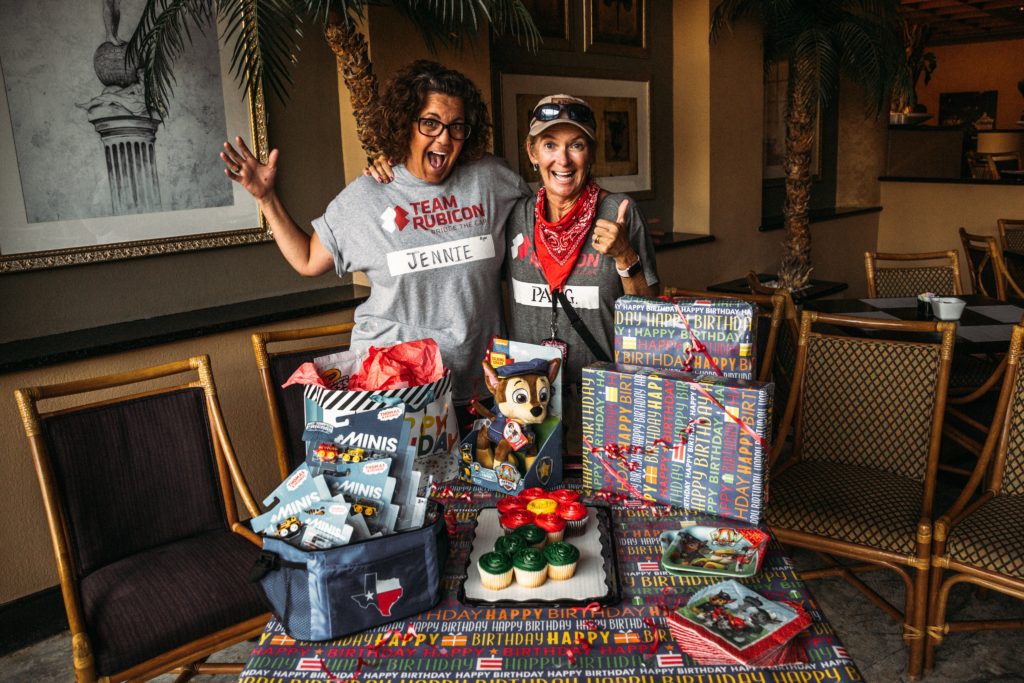 We wrapped a set of Paw Patrol toys, tucked a stuffed, talking “Chance” into a gift bag with a few brightly colored polo shirts and a coloring set and headed to Port Arthur.

I called Kandice when we were on the way and asked if she’d give us 10 minutes to set things up in the lobby—we weren’t just dropping off presents—we brought a party!

Watching him walk in, so shy and sweet without understanding who we were or what we were there for, was adorable.  Seeing the looks of surprise on the faces of his mom and grandma was humbling.  Seeing his expression when he saw the presents on the table was exciting—I missed one of my Godson’s birthdays when I deployed to Texas and throwing a party for a sweet little boy I’d never met made up for it. 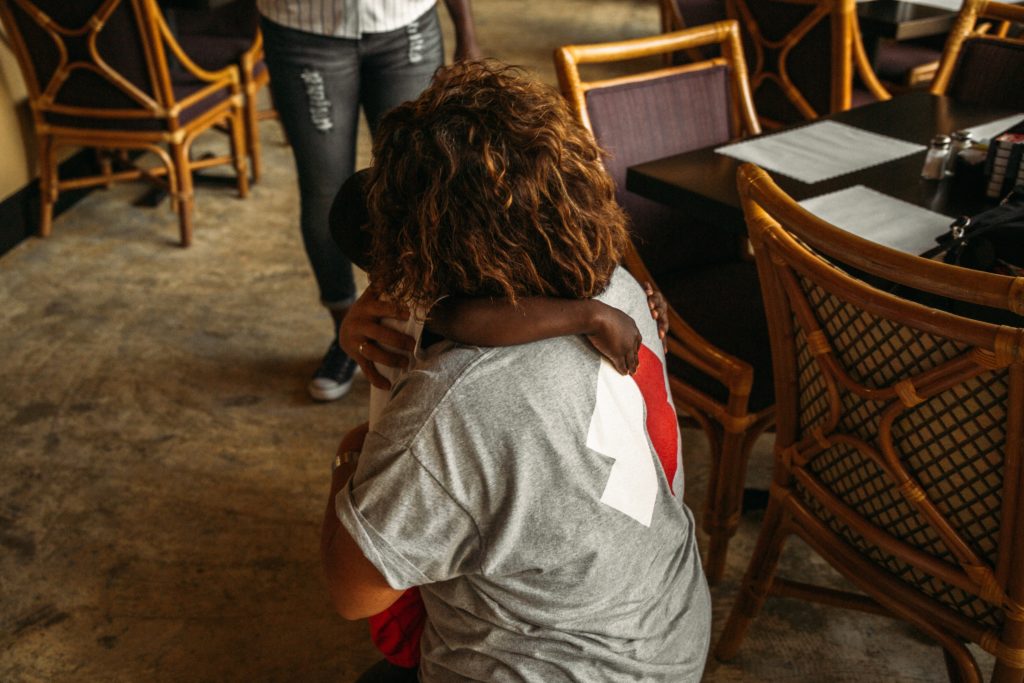 The best expression, though, was Pat Gustafson’s when Rylen sat down in her lap, holding a mini-train while I implored him to open yet another present.  Pat was beaming, and I’m sure I was too.  This pint-sized 4-year-old we’d never met managed to erase the stress and emotional exhaustion of the previous weeks in a few quick moments. 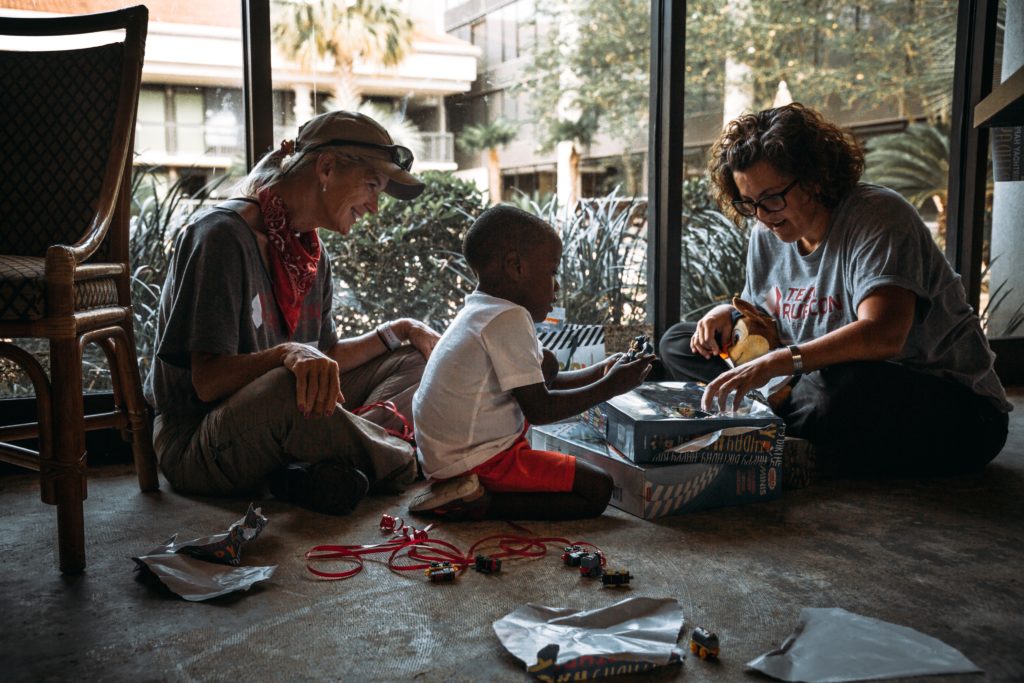 In the midst of it all, Jeremy ran around snapping photos so I could send them to Steve.

We packed everything up for him, helped his mom and grandma load up their truck and head to Grandpa’s house and walked back to our truck, three smiling Greyshirts from different generations, and different walks of life—equally satisfied.

As we drove home (ha! Back to the FOB in Beaumont) and chatted about his reactions and how adorable he was and how sweet his mom and grandma were, I thanked them for coming along an a ‘totally not Team Rubicon mission’ that soothed my soul. 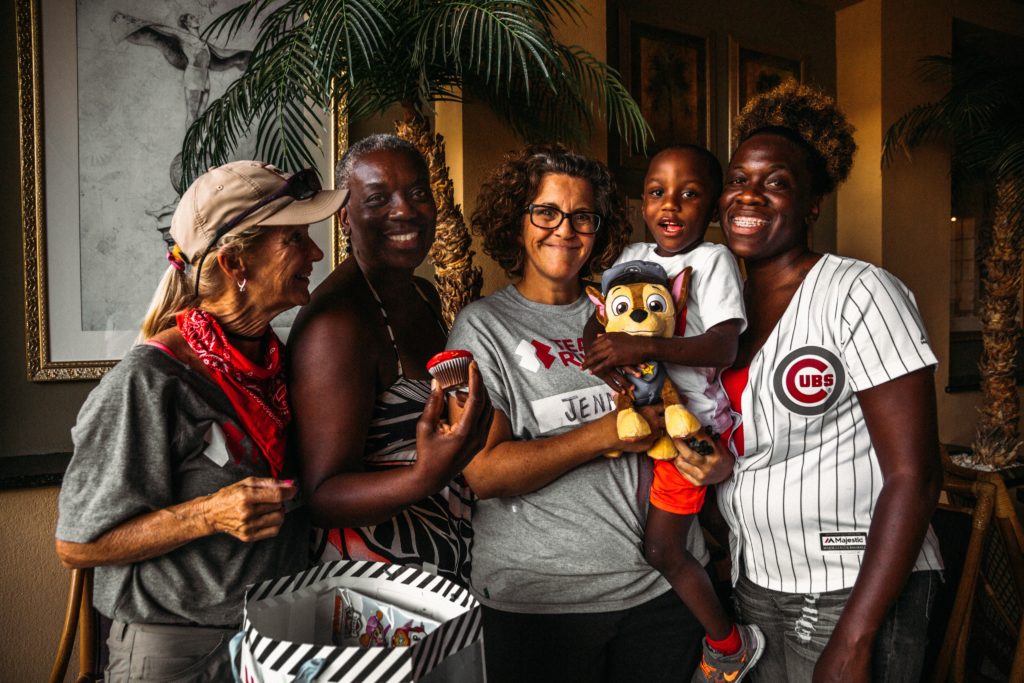 Jeremy said, “Why isn’t this a Team Rubicon mission? We’re Greyshirts, helping people after a disaster—that’s what we do, right?”

In the midst of chaos and destruction, we threw a party.

2 thoughts on “Change your socks: Kindness is my favorite self care”