Sitting in the ENT waiting room at the VA this week, observing. Waiting for my appointment. Watching. The very act of being inside the Veterans Affairs Medical Center in Washington DC causes me some anxiety.

I laughed as I typed that, ’cause it doesn’t quite capture the vibe, but you get the point. For reference, here’s an old blog.

I opened twitter and said, essentially: The VA stresses me out.  Someone send me a joke. I hoped [knew] a few people would have the app open and respond with something funny. It was intended as a distraction until my name was called.

There were fewer seats; spread to be socially distant which makes me more comfortable, Covid aside, but means fewer places to sit. I like the space. I was in the corner, facing the door with my back to the wall.

I saw an old dude walk in slowly, stop and look around. The seats were full.

I walked over and offered him my seat— he asked where the check-in window was. I showed him. The receptionist said he was in the wrong clinic. I walked him to the correct window in the adjacent clinic and watched while he stood in line to check-in. He made his way back to the shared waiting room; sat down in a now empty seat. 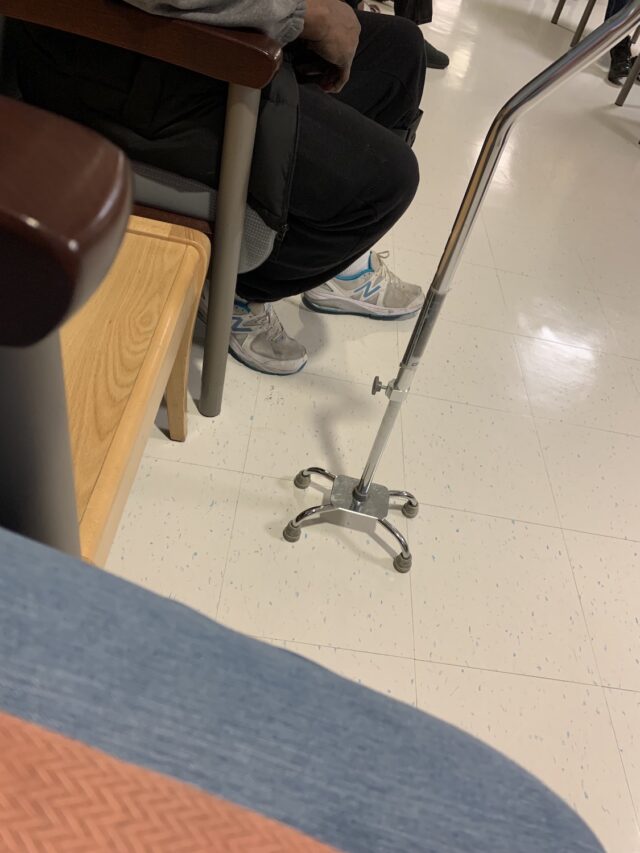 I heard his name called, watched him slowly labor towards the nurse for [presumably] his vitals. I sent my poly—trauma team a quick note. The upside of a traumatic brain injury is I have a case manager. I jokingly refer to him as a concierge and he’s a good piece of gear in the truest sense of the phrase. I don’t abuse the access, but it’s nice to have someone to ask questions like these— and the myriad other questions I toss his way from time to time.* 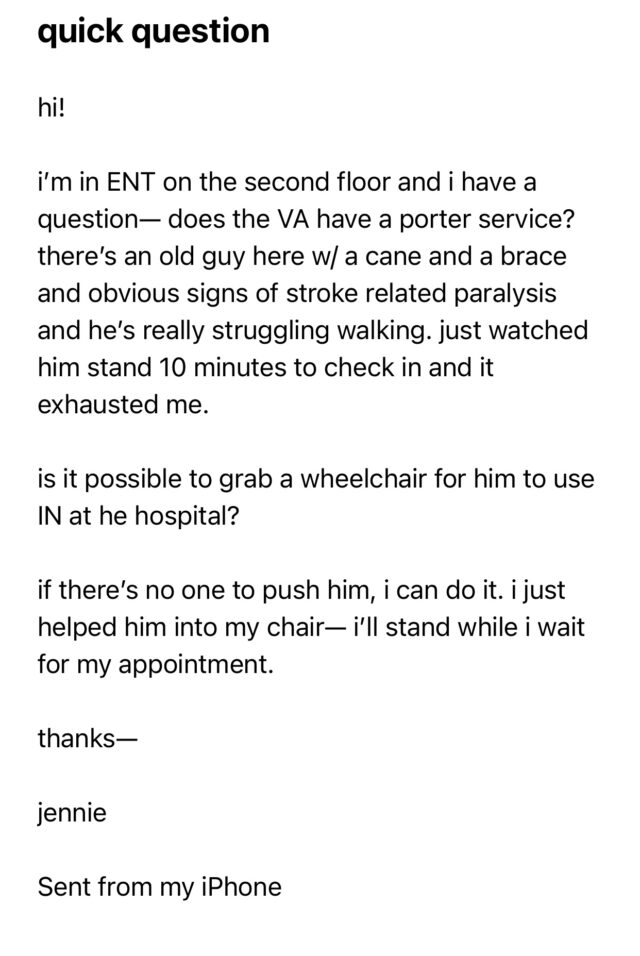 When he came back, I  gave him my seat and said, “Mr. H, when my appointment is done, I’m gonna grab a wheelchair and sit outside YOUR clinic, and Im’a be your chauffeur today.”

My appointment went well. My appointments at the VA almost always go well. It’s amazing, once you crack the code and get access to the care [and proactively make and attend appointments] how good the care is. It’s never the care that’s an issue. It’s access.

I’ve had positional vertigo for four months and finally did something about it. ¡lo! a 10 minute visit and some instructions not to turn my head or lay down or look up for the next 72 hours. And something for the nausea. And a mild admonishment for waiting four months.

No response to my email yet but the ENT desk confirmed there’s no porters on staff but there ARE wheelchairs available at the hospital entrance. I made my way to the atrium without turning my head — try to walk around corners and you realize your head leads the way.

Downstairs I dead ass said, “Yes, I’m a family member of the patient” thus not violating arbitrary rules about pushing a wheelchair for a stranger after listening to her vent a bit about the lack of staffing positions for things like porters.

I mean. Brother IN ARMS, but she didn’t ask for specifics. I signed for a chair. His last name is Ha, mine is Ha…

At the VA they generally ask for the first one or two letters of your last name and the last for of your social security number for administrative purposes. His last name starts with Ha and his first initial is J, I later learned.

It was meant to be. I am J Ha… he is J Ha… I started to take my newly acquired loaner wheelchair upstairs and realized with a bit of panic, I had to use the elevator. I generally skip the elevators when I can. Because reasons. Covid protocol requires only four people at a time, so at least it wouldn’t be a FULL elevator.  Took me a few minutes of watching and, bonus? I scored an empty elevator and rode it up one floor.

I sat in the clinic, waiting.  A nurse came out and asked with a cheerful voice, “are you Mr. H’s lady veteran friend, then? He won’t be ready for a while.”

Indeed. You tell him his ride is ready when he is. 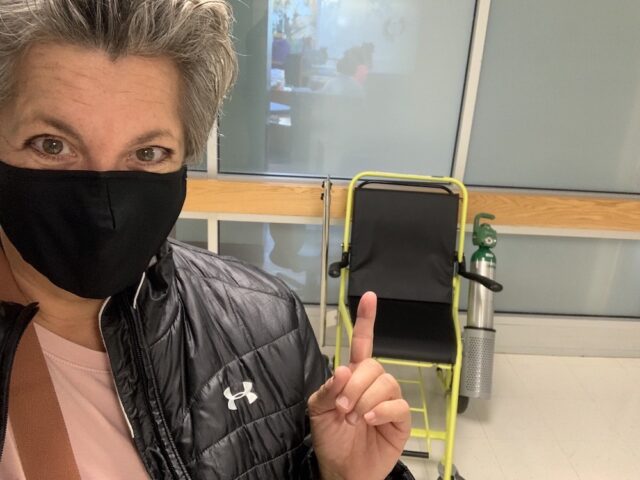 I sat reading jokes on twitter, waiting for my brother and realized I’m less stressed than I usually am inside the building!

“Ok, Mr. H. The thing is, they only give wheelchairs to family members, so today, you’re my big brother. I won’t tell if you don’t tell, ok?”

The nurse said “let’s get a family photo, then.”

He’s Army—I said I won’t hold it against him. 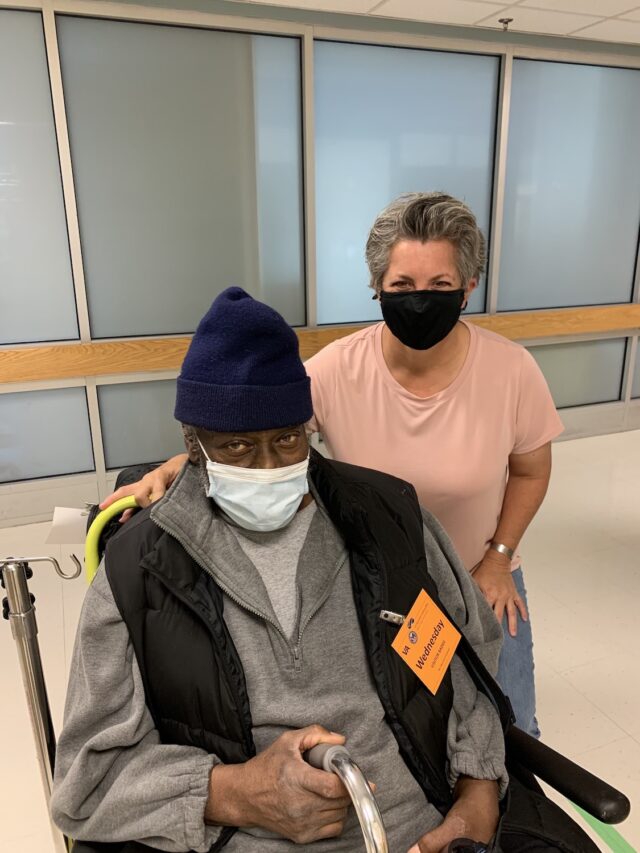 I waited while his nurse confirmed his next few appointments, asked if he needed anything before we headed downstairs to call his ride.

He needed Uber. I chatted w/ his granddaughter when he called her, confirmed the address he was headed to and got my ass kicked by technology. I apologized and said, “this is where I tell you your chauffeur has a brain injury, gets lost in a phine booth and can’t use new technology much better than you can.”

If you know me in real life, you know my brain shuts down when confronted w/ new technology. I tried twice to enter his destination and override the address it reverted to but the user interface was so different than it is on my phone I started to perspire—and asked for help. A kind young employee did it on the first try. “You know us kids and technology…”

I had the address written on my palm pilot (see below) and she didn’t get that joke. Oh my— I am The Olds, after-all! 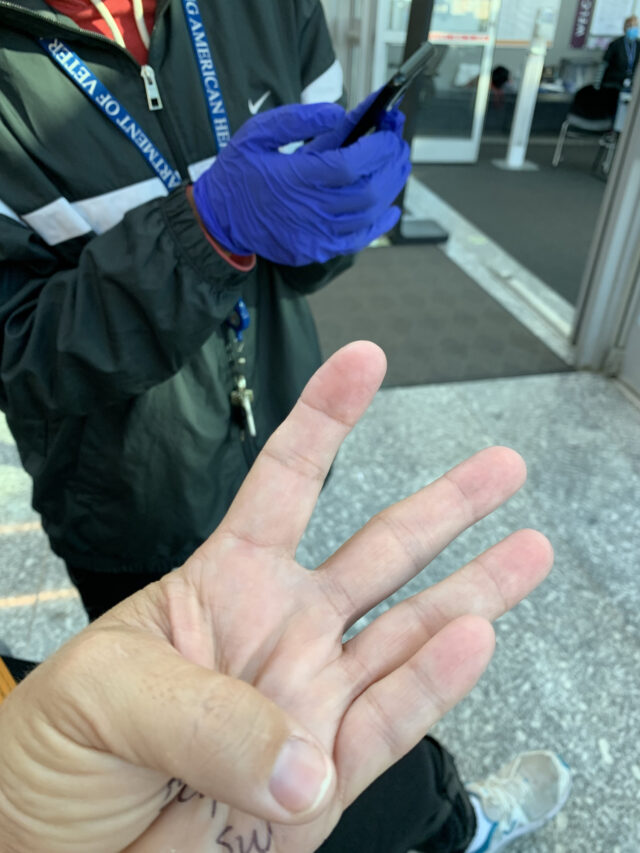 The wheelchair matron watched all of this and, as we headed outside she walked up and said, “so this is your brother, huh?  You two are related?”

“Yes. he’s my brother. Can’t you see the resemblance? It’s in the eyes.”

We tracked his ride’s arrival and when it was close, I wheeled him out to the car. I helped him in, careful not to overstep or make him feel like an invalid all the while making sure he made it up into the SUV.

As I buckled him in and apologized for leaning all in on him to do it he said, “It’s alright little sister, it was great seeing you today.”

I challenge you to make time to be kind today.

We’re all sisters and brothers in the end. 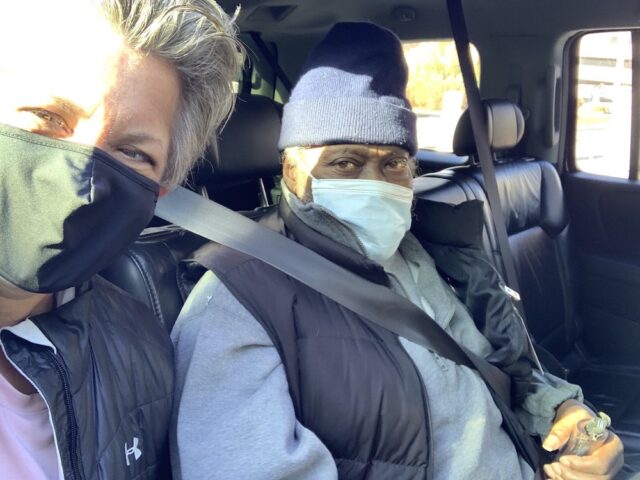 *real talk: knowing I can email the providers and staff on my poly—trauma team when I get confused by a process or system or location has been a game changer with regards to my personal VA experience. That and I have a few secret nooks I can step into if I’m overwhelmed while I’m in the building.

2 thoughts on “Brother in Arms: A family reunion”